Researchers at the University of Bristol have developed a new method of dating pottery — that was used to cook.

The approach involves carbon-dating animal fat residue recovered from the pores in such vessels, the team explains. Previously, archeologists would date pottery either by using context information — such as depictions on coins or in art — or by dating organic material that was buried with them. This new method is much more accurate, however, and the team explains it can be used to date a site even to within a human life span.

“Being able to directly date archaeological pots is one of the “Holy Grails” of archaeology,” says Professor Richard Evershed from the University of Bristol’s School of Chemistry, who lead the research.

“This new method is based on an idea I had going back more than 20 years. We made several earlier attempts to get the method right, but it wasn’t until we established our own radiocarbon facility in Bristol that we cracked it.”

Really old pottery, for example those made and used by stone-age farmers, is pretty tricky to date. Some are pretty simple and not particularly distinctive, and there is no context to date it against. So archeologists use radiocarbon dating, or 14C-dating, to analyze bones or other organic material that was buried with the pots. This is an inexact measurement and less accurate than dating the pots directly. Raw clay or fired pots, however, can’t be dated this way.

Professor Evershed’s idea was to analyze fatty acids from food preparation — which can be dated — that were protected from the passage of time within the pores of these pots. The team used spectroscopy and mass spectrometry to isolate these fatty acids and check that they could be tested.

As an experimental proof of concept, they analyzed fat extracts from ancient pottery at a range of sites in Britain, Europe, and Africa with already precise dating which were up to 8,000 years old, with very good results.

“It is very difficult to overstate the importance of this advance to the archaeological community,” says Professor Alex Bayliss, Head of Scientific Dating at Historic England, who undertook the statistical analyses. “Pottery typology is the most widely used dating technique in the discipline, and so the opportunity to place different kinds of pottery in calendar time much more securely will be of great practical significance.”

The new method has been used to date a collection of pottery found in Shoreditch, thought to be the most significant group of Early Neolithic pottery ever found in London. It is comprised of 436 fragments from at least 24 separate vessels and was discovered by archaeologists from MOLA (Museum of London Archaeology). Analysis of traces of milk fats extracted from these fragments showed that the pottery was 5,500 years old. The team were able to date the pottery collection to a window of just 138 years, to around 3600BC.

These people were likely linked to the migrant groups who first introduced farming to Britain from Continental Europe around 4000 BC, the team explains.

The paper “Accurate compound-specific 14C dating of archaeological pottery vessels” has been published in the journal Nature. 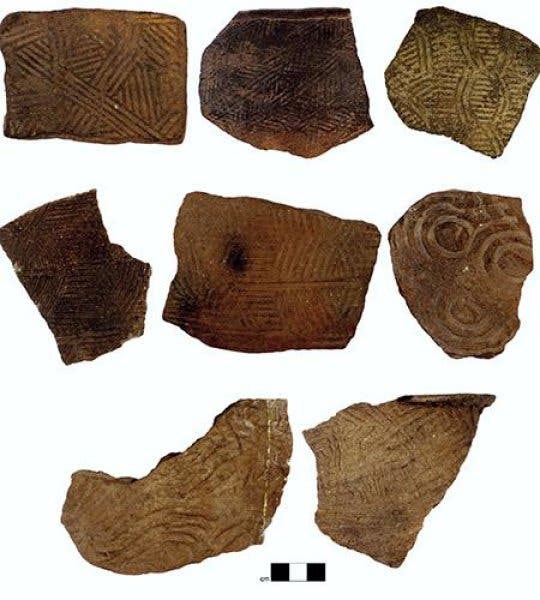 Examples of pottery shards used in the study. Symbols were stamped into the clay while it was still wet. Each design and the various characteristics of the clay were used to reconstruct social networks among Native American communities.
Image credits Jacob Lulewicz, (2019), PNAS.

Native American villages established social and political connections well before European explorers came a-knocking, new research reveals. These systems — which functioned similarly to today’s platforms such as MySpace or Facebook, the author notes — laid the groundwork for local political systems as far back as 600 A.D.

“Just as we have our own networks of ‘friends’ and ‘followers’ on platforms like Facebook and Twitter, societies that existed in North America between 1,200 and 350 years ago had their own information sharing networks,” said Jacob Lulewicz, the study’s author and a lecturer of archaeology in the Department of Anthropology in Arts & Sciences.

“Our study found a way to reconstruct these indigenous communication networks.”

The study used social network analysis techniques to map out the social and political relationships established between dozens of Native American villages in the studied region. The data came from messages embedded not in bytes, but in bits of pottery unearthed at sites throughout southern Appalachia clustered around the site of Etowah in Bartow County, Georgia (belonging to the so-called Mississippian culture). This included 276,626 sherds from 43 sites across eastern Tennessee and 88,705 sherds from 41 sites across northern Georgia. All the pottery dates between 800 and 1650 A.D., a period that saw the gradual emergence and subsequent decline of powerful chiefdoms that controlled wide networks of villages in the region.

Each fragment of pottery was analyzed to help Lulewicz understand how the technology used to make pottery and the symbols used to decorate them evolved over time. Armed with this rough timeline, Lulewicz then looked at how both elements disseminated among different villages or communities over time — in broad lines, this gave him a rough indication of how intensely they communicated.

Etowah served as the regional seat of social, political, economic and religious power across the region. This influence reached its peak between 1050 to 1325 A.D. and was still running in 1540 A.D. when the Spanish explorer Hernando de Soto first reached this area. De Soto accounts how the villages in this area were loosely bound to the influence of a single chief who resided in the town of Coosa (northern Georgia)

Lulewicz argues — based on his findings — that these political elites could emerge because of the social networks he describes. Their political power and centralized leadership, as well as the religious movements and inequality associated with their rule, were built on top of these wider, pre-existing social networks of common people. And, in the end, these networks would prove to be more stable and durable than any interactions dictated by elite chiefs.

“What I show in the paper is that while we see things like the emergence of super powerful chiefs and the rise of major economic inequalities, the very foundations of society — especially relationships and networks of kinship and family and reciprocity — remained virtually unchanged over 1,000 years,” Lulewicz said.

“That is, even though elite interests and political strategies waxed and waned and collapsed and flourished, very basic relationships and networks were some of the strongest, most durable aspects of society.”

Lulewicz argues that these findings show how important social connections between individuals are in guarding communities against unpredictable (or incompetent) leaders and the extended ruling class. He says it mirrors how digital social networks function today, and their role in contemporary revolutions or protest movements. Modern states are often quick to monitor, censor, or even shut down access to these virtual networks, he adds, which shows how valuable such social instruments are even today.

“This is super interesting — at least to me as a social scientist — for understanding how political movements actually play out,” he said. “It doesn’t come down to any particular, innate attribute of leaders and elites. What is comes down to is how those individuals are able to leverage the networks in which they are embedded.”

“Even though chiefs emerge at about 1000 A.D., over the next 650 years, chiefs actually shift their strategies of political and economic control. They tap into different parts of their networks, or leverage their connections in very different ways throughout time.”

“Because these very basic networks were so durable, they allowed these societies — especially common people — to buffer against and mediate the uncertainties associated with major political and economic change. They may have said, ‘You go live on top of that huge mound and do your sacred rituals, and we will go about life as usual for the most part.’ These communication networks served as a social constant for these people and allowed their cultures to persist for thousands of years even across transformations that could have been catastrophic.”

The paper “The social networks and structural variation of Mississippian sociopolitics in the southeastern United States” has been published in the journal PNAS.

One of the pottery fragments recovered from a layer dating approximately 20,000 years old in the Xianrendong cave in south China’s Jiangxi province. This makes it the oldest known pottery in the world. (C) Science/AAAS)/AP

In a fantastic discovery, a team of Chinese and US archaeologists have come across fragments belonging to a 20,000 year-old bowl in modern day China, confirmed as the earliest evidence of pottery. The findings push back the invention of pottery by 10,000 years and suggest that human were more socially advanced than previously thought.

The pottery fragments were discovered in Xianrendong Cave, Jiangxi Province, and it is believed the bowl was a cauldron to cook food, or quite possibly to brew alcohol. Previously, scientists used to believe the invention of pottery correlates to the period about 10,000 years ago when humans moved from being hunter-gathers to farmers.

This latest discovery pushes the invention of pottery back to the last ice age, which might provide new explanations for the creation of pottery, said Gideon Shelach, chair of the Louis Frieberg Center for East Asian Studies at The Hebrew University in Israel.

“Hunter-gatherers were under pressure to get enough food,” he told BBC News.

“If the invention is a good one, it spreads pretty fast. And it seems that in that part of southern China, pottery spread among hunter-gatherers in a large area,” said lead researcher, Prof Ofer Bar-Yosef of Harvard University.

In an accompanying Science article, Shelach wrote that such research efforts “are fundamental for a better understanding of socio-economic change (25,000 to 19,000 years ago) and the development that led to the emergency of sedentary agricultural societies.”

Shelach also speculates that the invention of pottery may have been sparked by the need for a recipient for brewing alcohol – a social-driver.

“People were gathering together in larger groups and you needed social activities to mitigate against increased tensions,” he told BBC News.

“Maybe those potteries were used to brew alcohol.

“It used to be thought that the beginning of pottery was associated with agriculture and sedentary lifestyle,” he added.

“Yet here we find it 8,000 years or more before this transition. This is a very puzzling situation.”

Findings were published in the journal Science.