Atmospheric rivers are narrow corridors of moisture that move horizontally across the planet. They play an important role in the global water cycle — although these ‘rivers’ cover less than 10% of the planet’s atmosphere, they’re responsible for 90% of the global north-south water vapor transport. Now, researchers have found another effect of these atmospheric rivers: they open up holes in the Antarctic sea ice.

Storms have been known to trigger large openings in sea ice — openings that can be tens or even hundreds of thousands of square kilometers across. But storms alone can’t explain why these openings (also called polynyas) form the way they do. Now, a team of researchers at Khalifa University in Abu Dhabi, United Arab Emirates, believe they have the answer.

Diana Francis and colleagues analyzed major two major polynya events, from 1973 and 2017, finding that atmospheric rivers bringing heat and water vapor played a key role in the event. In 2017, one such river singlehandedly raised air temperatures in the Weddell Sea in West Antarctica by 10°C.

The interaction is complex. It’s not just that the rising temperatures melt and break the ice. The heat and water vapor also make storms more intense, which also contribute to ice breaking. So the atmospheric rivers contribute both directly and indirectly to this process.

Polynyas aren’t necessarily bad: on one hand, they can be good for the local environment.

“Polynyas strongly influence the physical and ecological dynamics of the Southern Ocean,” said co-author Kyle Mattingly, a post-doctoral researcher at the Rutgers Institute of Earth, Ocean, and Atmospheric Sciences. “They serve as giant ‘windows’ in the sea ice that allow large amounts of heat to move from the ocean to the atmosphere, modifying regional and global ocean circulation. They also affect the timing and magnitude of phytoplankton (algae) blooms, which are the base of the marine food web.”

But from a climate perspective, this is troubling. The open sea is darker than the ice that covers it, which means it absorbs more heat, which can melt even more ice and so on, contributing to a local and even a global warming. To make matters even more concerning, global warming is expected to increase the frequency of atmospheric river events by around 50% if the current trends continue.

Greenland and Antarctic ice sheets are growing thinner as a result of man-made greenhouse emissions. But the phenomenon isn’t always linear or clear. This is why understanding the interlinked processes that shape the Antarctic is so important for our overall understanding of climate change.

“Our study will pave the way for greater understanding of climate variability and climate change in these regions,” concludes Mattingly.

Journal Reference: “On the crucial role of atmospheric rivers in the two major Weddell Polynya events in 1973 and 2017 in Antarctica” Science Advances (2020). advances.sciencemag.org/lookup … .1126/sciadv.abc2695

An incredibly large area of ice has opened up in the Weddell Sea east of the Antarctic Peninsula, for the second time in 40 years. The phenomenon was previously observed in the same location in the 1970s when satellite imaging was barely making its first baby steps. It’s not clear at this point if the ice hole is influenced in any way by climate change. 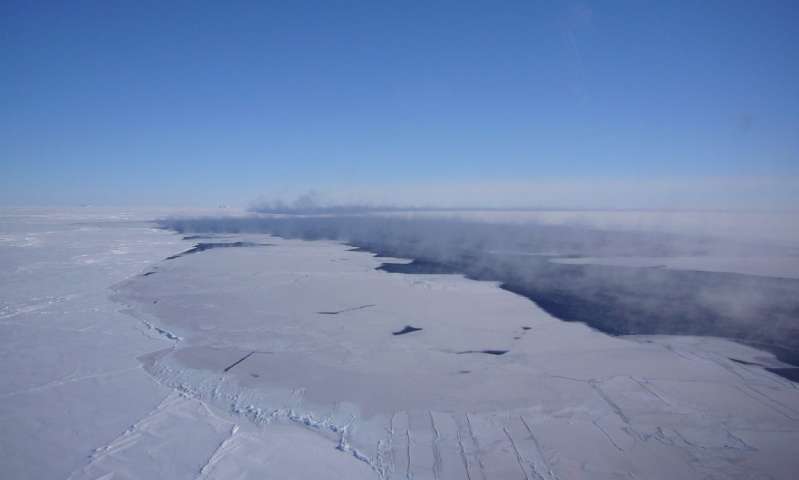 Although winter is in full swing right now in Antarctica, a large swath of water in the Weddell sea is ice-free. Such ice-free areas are called ‘polynya’ (Russian) by polar scientists. These occur in the Arctic and Antarctica, typically around the coast. This gaping polynya, which measures an area equivalent to the Netherlands, opened right in the middle of a sea which would have otherwise been completely covered in thick ice.

It’s not that it’s not cold. Temperatures are in their usual frigid range for this time of year. Instead, the Weddel Polynya can be pinned to water stratification in the Southern Ocean, according to scientists at the GEOMAR Helmholtz Centre for Ocean Research who closely following its development. 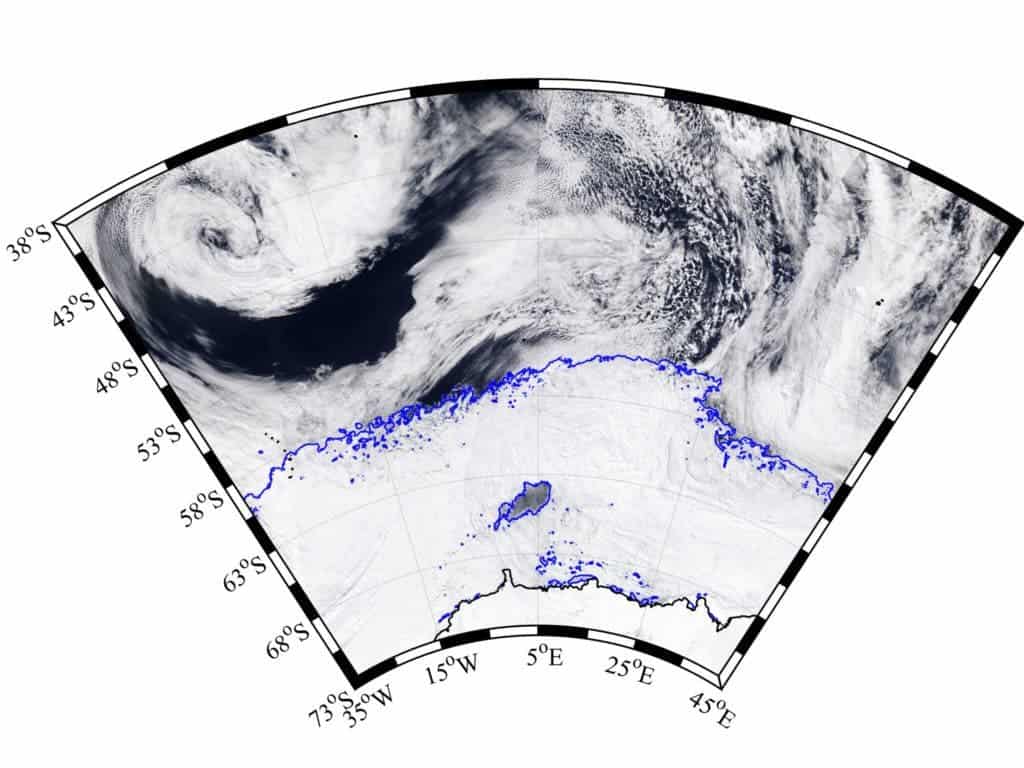 Satellite image of the polynya. Credit: MODIS-Aqua via NASA Worldview.

Usually, a very cold but fresh layer of water covers a warmer and saltier layer of water, acting as insulation. In certain conditions, however, the warm water can rise to the surface, melting the ice. “This is like opening a pressure relief valve – the ocean then releases a surplus of heat to the atmosphere for several consecutive winters until the heat reservoir is exhausted,” said  Prof. Dr. Mojib Latif, head of the Research Division at GEOMAR, in a public statement.

The big questions right now are how often such polynya occur and whether or not climate change is amplifying their formation. In situ data is hard to come by but satellite readings will help computer models come up with more precise simulations that might single out culprits. Compared to the last time this happened 40 years ago, scientists have far more data on their hands.

A preliminary analysis run by American scientists suggests that the Weddell Polynya should not occur again because of climate change at all. Due to higher precipitation levels in the region and melting ice, the surface is expected to decouple from deeper water layers. However, previous other studies which applied the “Kiel Climate Model” found that polynya is part of a long-term naturally varying process, which can only mean the hole will open again sooner or later.

“The fact that now a large, ice-free area can be observed in the Weddell Sea confirms our theory and gives us another data point for further model studies,” said Dr. Torge Martin, meteorologist and climate modeler at GEOMAR.

Oceanographers believe that Antarctica‘s oceanic waters, which are turning from briny to fresh in recent decades, are causing the shutdown of the Southern Ocean’s coldest, deepest currents.

The cold currents, called the Antarctic Bottom Water, are basically cold, briny, underwater rivers flowing from the underwater edge of the Antarctic continent north toward the equator, very close to the seafloor. They carry oxygen, carbon, and many nutrients to the depths of the ocean, and play a huge role in the survival of creatures which live close to the seafloor. It has already been shown in the past years that the effects of this current are shrinking, but it was unclear if this is a man-caused, or if it is simply a natural process.

This new study concludes that Antarctica’s changing climate is to blame for the shrinking Antarctica Bottom Water. Here’s what happens, at a very basic level: we’re dealing with a global warming situation. The higher temperatures cause ice to melt, and they also cause increased precipitations (both rain and snow) in the Antarctic areas. The melting glaciers and precipitation bring a massive influx of sweet water which slowly replaces the briny, oceanic water in the area. Since the fresh and briny water have different densities and somewhat different chemical properties, this prevents the currents from taking their normal course.

“Deep ocean waters only mix directly to the surface in a few small regions of the global ocean, so this has effectively shut one of the main conduits for deep-ocean heat to escape,” said Casimir de Lavergne, an oceanographer at McGill University in Montreal.

The key part of the chain here are polynyas – natural holes surrounded by sea ice. These persistent regions of open water form when upwellings of warm ocean water keep water temperatures above freezing, acting pretty much like natural refrigerators – they absorb the cold temperatures, the water gets colder (higher density), and drops to the bottom, sending hotter water in its stead, creating a current.

But as Antarctica’s water freshened, fewer and fewer polynyas appeared – specifically because freshwater is less dense, and even if it gets colder, it doesn’t sink to the bottom. It acts like a lid, sealing off the current and shutting down oceanic circulation.

“What we suggest is, the change in salinity of the surface water makes them so light that even very strong cooling is not sufficient to make them dense enough to sink,” de Lavergne told ZME Science. “Mixing them gets harder and harder.”

De Lavergne cautioned that the heat-storage effect is localized to the Antarctica area, and it’s not connected to the so-called global warming “hiatus” – the observed slowing down of global warming, even with increased energies in the system.

“Our study is still a hypothesis,” he added. “We say that climate change is preventing convection from happening, but we do not know how frequent it was in the past, so that’s a big avenue for future research.”

However, even as just a hypothesis, this is a worrying conclusion; oceanic anoxia is not a laughing matter, and it’s just another evidence that this global warming we are causing has significant and sometimes unexpected effects all around the world.