Common sense might tell you that only mammals are capable of lactating, it’s a little know fact, however, that some species of birds are also capable of making milk for their young. The common pigeon produces milk in its crop, located near the esophagus, to feed its young. Scientists have long been wondering how the lactating process takes place for pigeons, but now Deakin University and CSIRO researchers found the gene expression involved. A few years from now we might be all drinking it. 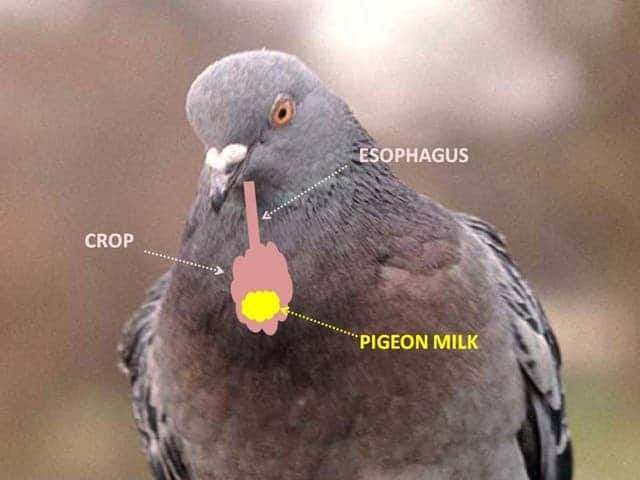 If you find the prospect of such a thing ever happening, consider that its a highly nurturing substance – rich in minerals, protein, fat and antibodies. Since its mainly a bird accustomed and adaptable to all kinds of hazardous environments, pigeon milk is packed full of antioxidants and immune-system-boosting proteins. The pigeon’s e milk is actually a secretion that the parents regurgitate into the young bird’s mouths, helping them grow from their frail infancy. Flamingos and male Emperor penguins, oddly enough, produce it as well.

Deakin University and CSIRO research fellow Tamsyn Crowley said while the function was the same as mammalian milk, the mechanism was completely different.

”We identified a number of immune genes and also found the mechanism by which this process is happening,” she said. ”It’s not like a gland in a mammal that produces the milk. It’s actually part of the crop that falls off and then that is fed to the young.”

The pigeon’s crop, responsible for secreting the milk, is actually part of its digestion chain and is responsible for storing food. The crop however changes immediately prior to lactation in response to hormones and reverts back after lactation, exactly like in any other mammal. The birds begin ”lactating” two-days before the eggs hatch and feed their young for the first 10 days. In the first three days, squabs double their weight daily.
To understand the lactating mechanism in birds, scientists had to sequence the pigeon’s genome, which by their account more or less like flying blind. They did it eventually, of course, after they compared the gene expression of pigeons that do and do not lactate, and eventually compared them to the chicken’s DNA (enough weird science for today; you can’t milk a chicken, don’t worry).They found that the lactating pigeons had over-expression of genes involved with immune response and antioxidant production, as well as genes involved in the production of triglycerides.

‘If you can find proteins that are protecting against disease in pigeons, there’s nothing to say that that can’t be applied in other birds, such as chickens,” she said. ”And that could be a good thing for an industry that is already looking at ways to minimise antibiotics.”

As long as they don’t make lactating chickens, I’m all cool with it. The paper was published in the journal BMC Genomics.