A new analysis of data from NASA’s Lunar Orbiter Laser Altimeter (LOLA) shows that molten rock created by lunar impacts has been around for much longer than previously believed. 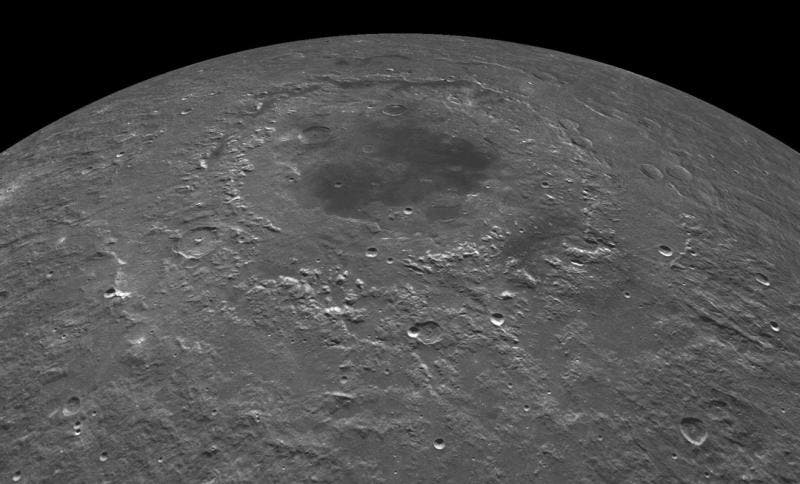 During its earliest days, the Moon was covered in an ocean of molten rock, pretty much like every planet out there. As that lunar magma ocean cooled over millions of years, a process called igneous differentiation took over. Basically, igneous differentiation is an umbrella term for the various processes by which magmas undergo bulk chemical change during the partial melting process (or cooling, emplacement or eruption).

However, according to Brown University researchers, this wasn’t the only time the lunar surface was melted on a massive scale. The Moon, unlike the Earth, has no atmosphere to protect it from meteorite impacts; these impacts are much more frequent and much more violent there. Such is the case with the impact event that formed the Orientale basin on the Moon’s western edge and far side: it produced a “sea” of lava some 350 km (220 miles) across, and almost 10 km (6 miles) deep. Similar processes happened at various times in the Moon’s history in at least 30 other large impact basins. 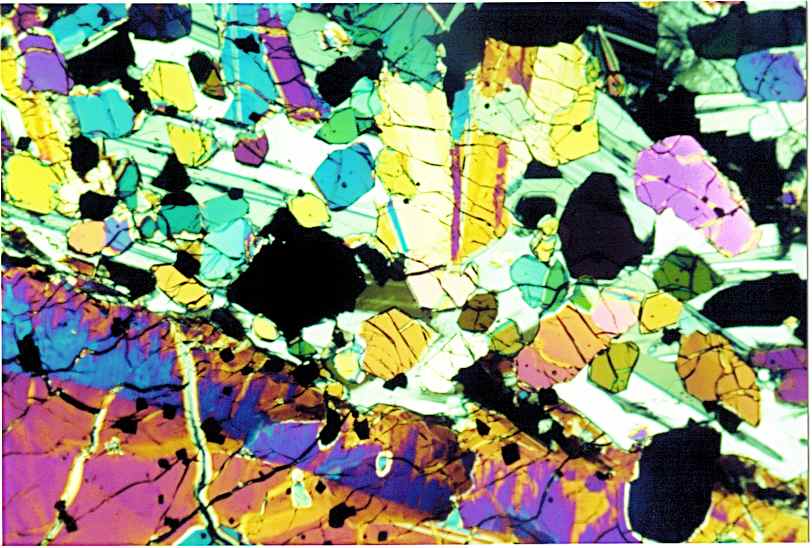 Microphogoraphs of lunar samples, as seen through cross polarized light.

Vaughan and his colleagues show that as these melt seas cooled, they igneously differentiated in pretty much the same way it did during the Moon’s initial cooling phase, so rocks found there could actually be mistaken for pristine, original ones.

“This work adds the concept of impact melt magma seas to the lexicon of lunar rock-forming processes,” said planetary geologist James W. Head III, the Scherck Distinguished Professor of Geological Sciences and the senior researcher involved in the study. “It emphasizes that one must consider the detailed point of origin of the rocks in order to interpret them correctly.”

Bad thing is, these rocks include the ones brought back by the Apollo project and Russia’s Luna missions. It’s quite possible, the researchers say, that impact melt material is present in lunar samples thought to be representative of the early formation of the lunar crust, which if true, could raise some big question on previous interpretation. If lunar samples do include melt material, it would help to explain some puzzling findings from lunar samples.

The thing is, for differentiation to take place, it would have to remain liquid for several thousands of years, which is very likely, when you’re dealing with “seas” as big as the ones described here. The next question was what that differentiation might look like, and how can we determine the composition of the impact melt sea.

“This is a mechanism by which the Moon was later modified to add petrologic complexity,” Vaughan said. “It helps make sense of mineralogical data that doesn’t always fit in this lunar magma ocean idea.”

Magma forms much deeper than geologists previously believed, according to a new study conducted by Rice University. 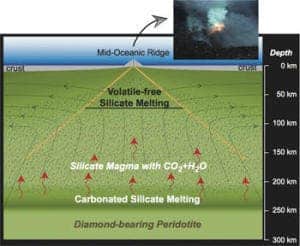 The group led by geologist Rajdeep Dasgupta put very small samples of peridotite under very large pressures, to find out if the rock can liquify, at least in small amounts, as deep as 250 km beneath the ocean floor. Peridotite is the dominant rock of the Earth’s mantle above a depth of about 400 km, and it was previously believed that the mineral doesn’t liquify above that depth. 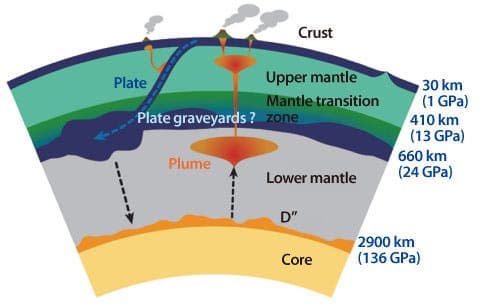 The Rice team focused on mantle beneath oceans because that is where the crust is typically formed; in a much-simplified version, the silicate melts (magma) rise with the convective currents, cool as they reach the crust and then solidify to create new crust. The starting point for melting has long been thought to be at 70 kilometres beneath the seafloor.

In order to determine the mantle’s density and properties, geophysicists used seismic information; seismic waves from earthquakes travel the globe much like sound waves, and by measuring their speed, we can estimate some the medium’s properties. These waves travel faster in solids (especially in denser solids), and slower in liquids; the first questions arose here.

“Seismologists have observed anomalies in their velocity data as deep as 200 kilometers beneath the ocean floor,” Dasgupta said. “Based on our work, we show that trace amounts of magma are generated at this depth, which would potentially explain that.” 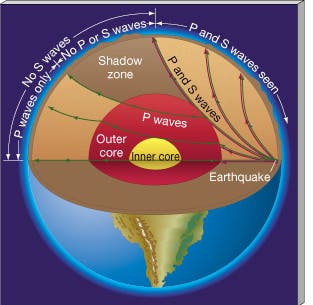 So it didn’t really add up – and this wasn’t the only clue. Geophysicists have also struggled to explain the bulk electrical conductivity of the oceanic mantle – something which was observed but couldn’t really be figured out.

“The magma at such depths has a high enough amount of dissolved carbon dioxide that its conductivity is very high,” Dasgupta said. “As a consequence, we can explain the conductivity of the mantle, which we knew was very high but always struggled to explain.”

The thing is, we cannot really dig down to the mantle – this is miles away from happening, both figuratively and literally, so we have to rely on indirect measurements (seismology, electric measurements, etc), lab experiments and surface extrapolations. Another interesting they found in this experiment was that carbonated rocks melt at significantly lower temperatures than non-carbonated.

“This deep melting makes the silicate differentiation of the planet much more efficient than previously thought,” Dasgupta said. “Not only that, this deep magma is the main agent to bring all the key ingredients for life — water and carbon — to the surface of the Earth.”

However, Dasgupta believes that volcanic rocks are the key to understanding our planet’s mantle.

“Our field of research is called experimental petrology,” he said. “We have all the necessary tools to simulate very high pressures (up to nearly 750,000 pounds per square inch for these experiments) and temperatures. We can subject small amounts of rock samples to these conditions and see what happens.” 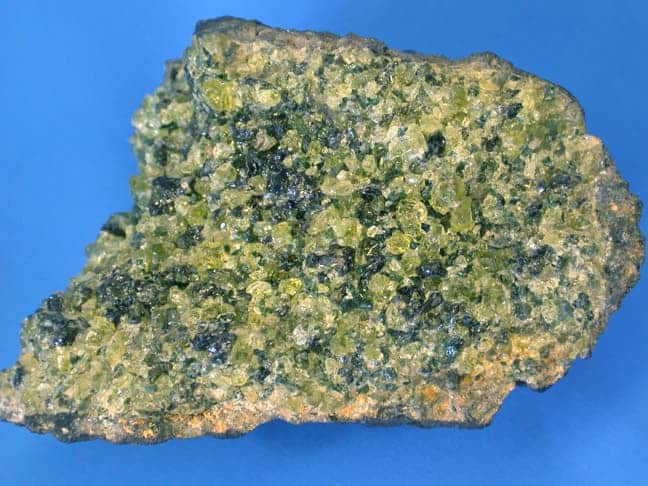 To subject the rocks to these hellish conditions, they use massive hydraulic presses.

“When rocks come from deep in the mantle to shallower depths, they cross a certain boundary called the solidus, where rocks begin to undergo partial melting and produce magmas,” Dasgupta said. “Scientists knew the effect of a trace amount of carbon dioxide or water would be to lower this boundary, but our new estimation made it 150-180 kilometers deeper from the known depth of 70 kilometers,” he said.

These findings have major implications for all planetary sciences:

“What we are now saying is that with just a trace of carbon dioxide in the mantle, melting can begin as deep as around 200 kilometers. And when we incorporate the effect of trace water, the magma generation depth becomes at least 250 kilometers. This does not generate a large amount, but we show the extent of magma generation is larger than previously thought and, as a consequence, it has the capacity to affect geophysical and geochemical properties of the planet as a whole.”

The paper will be published this week in Nature

Scientists have for the first time determined the actual permeability of the asthenosphere in Earth’s upper mantle, which is basically responsible for how fast the melt rises towards the surface of the earth, and the results were surprising to say the least. Researchers found that it actually moves 25 times faster than previously assumed, which forces us to reconsider every volcanic model that includes melt.

A huge centrifuge measuring 2 meters in diameter was embedded in the cellar’s floor. It spins at 2800 rotations per minute and creates an acceleration about 3000 times bigger than Earth’s gravity; when at full capacity, it creates 120 decibels, which is about as loud as an airplane, according to Max Schmidt, a professor from the Institute for Mineralogy and Petrology at ETH Zurich. It can reach 850 km/h, and after it reaches this speed, if you would turn it off, it takes about an hour to stop.

This globally unique centrifuge cast a whole new light on how we perceive magmatism. The researchers used it to simulate the transport of molten lava made of basaltic glass from the mid-ocean ridge. The matrix through which the melt passed through consisted of olivine, which makes about 2/3 of the upper mantle. They applied a temperature of 1300 degrees and a pressure of 1 giga pascal. After the basaltic mass melted, they accelerated to about 700 g’s and were then able to calculate the permeability directly by microscopic analysis and were then able to correlate porosity to permeability, which is a main part for thermo-mecanical models.

In the light of these new discoveries, these models have to be revised; if the magma ascends much faster that means it interacts a lot less with the rock it penetrates. It also explains a few things, such as why volcanoes are active for only a few thousand years.