I was lucky enough this weekend to be away from the city and at an altitude of about 1800m, deep in the mountain side. The rare, clean atmosphere allowed for an uncanny view of the night sky, at least for an urbanite as myself, filled with the most distinguishable stellar bodies I’ve ever been granted to see. The whole experience was turn to gold as I found myself right in the middle of the annual Perseid meteor shower, which covered the firmament with shooting stars every few minutes or so. Actually, the International Meteor Organization recorded an average of 30 shooting stars an hour Friday morning, rising to 45 to 60 by Friday night and Saturday morning. And on top of everything, one had a bright full moon performing on the skyline stage as well.

Now, like I said, I had an incredible view which I’d love to re-edit as many times as possible, but can you imagine how the show must have been like from above the meteor shower, instead of beneath it. Well, astronaut Ron Garan surprised a shooting star with his camera in all its splendor as it was passing below the International Space Station, and like expected it’s nothing short of breathtaking. 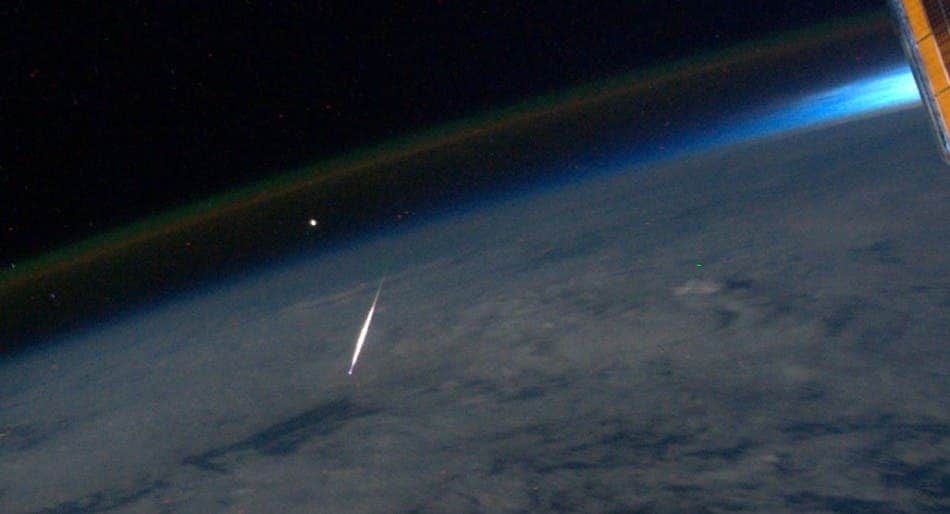 “What a ‘Shooting Star’ looks like #FromSpace Taken yesterday during Perseids Meteor Shower…” Garan tweeted from his Twitter account on Sunday, who is at the end of his six months tour on-board the ISS. Quite the finale it must have been for the American astronaut.

The Perseid meteor shower hits Earth every August, as a result of a myriad of debris filled with dust particles left over from the Swift-Tuttle comet. The meteors originate from the constellation Perseus, hence the name. The ice and dust particles, most sized like a grain of sand, while others comparable to peas or marbles, enter Earth’s atmosphere at 133,200 mph, plummeting in flames – none reach the ground.

Although, the Perseid meteor shower peaked on August 12, those of you who missed it due to weather or whatever other reasons shouldn’t fret since Perseids will be active till August 24, where you can glimpse at least 5-10 meteors per hour.

It’s time to dust off that telescope from the attic. What was your experience with the Perseids? Did any of you manage to take some photos? If so, please share – impressions and photos are welcome in the comment section below or on our facebook page.

Here’s some more stunning photos of the Perseids, this time taken from the ground.