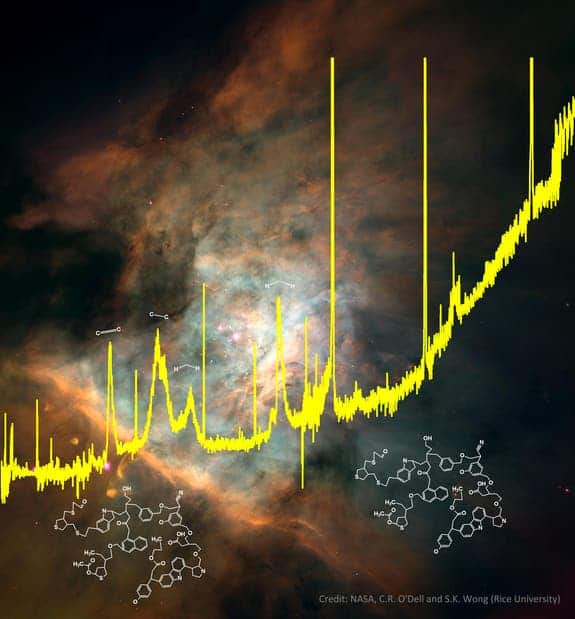 A new study published by researchers at University of Hong Kong has produced controversial waves among the astronomy community, as it claims, backed by sound evidence, that organic matter can be created naturally by stars and travel through out the universe via interstellar dust.

It’s somewhat hard to believe, even picture, how organic matter can be spewed out by stars without current or previous life being involved, however incredibly enough this is very much true – moreover, organic compounds seem to be everywhere!

The Hong Kong researchers first observed various stars of different evolutionary stages and studied the well-known but mysterious infrared emissions, called Unidentified Infrared Emission (UIE). What they found was that highly complex organic compounds are ejected into space by stars under the form of cosmic dust at a surprisingly high pace, filling interstellar space. Some compounds’ chemical structures resemble the makeup of coal and petroleum, the study’s lead author Sun Kwok, of the University of Hong Kong, said.

“What impressed me most is that complex organics are easily formed by stars, they are everywhere in our own galaxy and in other galaxies,” Kwok told SPACE.com in an email interview. “Nature is much more clever than we had imagined.”

Previously, UIE features were thought to be emitted by polycyclic aromatic hydrocarbon, or PAH, molecules – simple molecules made of hydrogen and carbon. The Hong Kong scientists’ recently published paper in the journal Nature suggests this hypothesis is incorrect.

Capitalizing on data furnished by the European Space Agency‘s Infrared Space Observatory and NASA‘s Spitzer Space Telescope, the researchers found that the UIE features are not emitted by PAH molecules, but by complex organic compounds. These emissions occur, it seems, during the protoplanetary nebula stage and grew stronger as the stars matured into the planetary nebula phase.

“We therefore know that these organics are being made in the circumstellar stellar environment,” Kwok said.

Curiously enough, scientists have found these organic compounds observed in jetissoned star dust is very chemically similar to those found on meteorites. The primordial birth place of meteors lies in space rocks, and cosmic dust could easily enrich the organic coating, or place it there in the first place.

“It is quite possible that the organics in meteorites are remnants of star dust in the solar nebula,” he explained. “The star dust [was] ejected by nearby planetary nebula[s] and survived the journey across the galaxy.”

A not too far off hypothesis could be emitted,thus. Namely, during the Earth’s early stage in history when its atmosphere was still too thin to protect the planet from the hazards of the solar system and meteor showers rained constantly, there might exist a possibility that the organic compounds brought in by meteors could have played a major role in the formation of life. Basically, if this is true, we’re all star dust – children of the stars.

“Coal and kerogen are products of life and it took a long time for them to form,” Kwok said. “How do stars make such complicated organics under seemingly unfavorable conditions and [do] it so rapidly?”