Some time ago we wrote about the mantis shrimp’s uncanny form of communication: polarized light. Research focusing in on these tiny animals’ chatter will allow us to create a whole new type of polarizer — an optical device widely employed in modern cameras, DVD players, even sunglasses.

Mantis shrimp are probably best known for the dazzling colors that adorn their shells. The second thing they’re best known for is their tendency to violently murder anything they come into contact with. Using two frontal appendages that can move as fast as a bullet, the shrimp hunts for crabs, oysters, octopi, anything really, blasting them apart with an insanely powerful 1,5 kilo Newtons of force (337.21 lbs of force.)

Look at him. He just knows he’s the baddest shrimp in this pond.
Image via wikipedia

But why? And how did they come by their weapons? What is the mantis shrimp’s secret? Well nobody knows, because they communicate using a process so secretive most other species don’t even realize it’s happening.

The shrimp rely on light polarization to keep their conversations private. They have evolved reflectors that allow them to control the polarization of their visual signals, a property of light that most other species aren’t able to pick up on.

In an effort to crack their code, researchers from the Ecology of Vision Group (based in the University of Bristol’s School of Biological Sciences) have studied the shrimps and discovered they employ a polarizing structure radically different from anything that humans have ever seen or developed.

The team’s analysis, coupled with computer modelling revealed that the mantis shrimp’s polarizers manipulate light across it’s structure rather than through its depth — as our polarizers do. This mechanism allows the animal to have small, microscopically thin and dynamic optical structures that still produce big, bright and colourful polarized signals.

“When it comes to developing a new way to make polarizers, nature has come up with optical solutions we haven’t yet thought of,” said Dr Nicholas Roberts from the School of Biological Sciences.

“Industries working on optical technologies will be interested in this new solution mantis shrimp have found to create a polarizer as new ways for humans to use and control light are developed.”

The full paper, titled ‘A shape-anisotropic reflective polarizer in a stomatopod crustacean’ is available online here.

Material scientists at Oxford University, collaborating with experts from Karlsruhe, Munster and Exeter, have developed the world’s first light-based memory banks that can store data permanently. The device is build from simple materials, in use in CDs and DVDs today, and promises to dramatically improve the speed of modern computing. 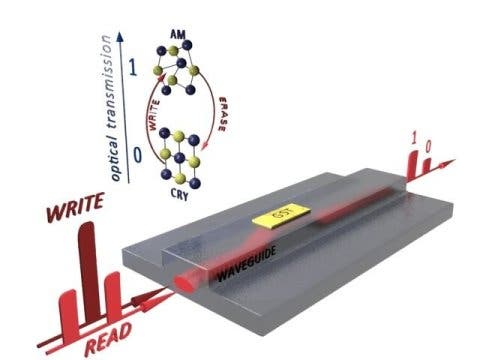 A schematic of the device, showing its structure and the propagation of light through it.
Image courtesy of University of Oxford

Computing power has come a long in a very short time, with the processors that brought Apollo 11 to the Moon only 50 years ago being outmatched by your average smartphone. But in coming so far with their development, other areas of hardware have lagged behind in evolution, holding back our computers’ overall performance. The relatively slow flow of data between the processor and memory is the main limiting factor, as Professor Harish Bhaskaran, who led the research, explains.

“There’s no point using faster processors if the limiting factor is the shuttling of information to-and-from the memory — the so-called von-Neumann bottleneck,” he says. “But we think using light can significantly speed this up.”

However, simply basing the flow of information on light wouldn’t solve the problem.

Think of the processor as a busy downtown area, the data banks as being the residential areas and information bits as the cars commuting between the two. Even if the areas were to be connected by a highway with enough lanes and light-speed speed limits, the cars getting off it and driving through the neighborhoods at low speed to reach individual homes would clog up the traffic. In the same way, the need to convert the information from photons back to electrical signals would mean that the bottleneck isn’t removed, merely constrained to that particular process.

What scientists need is to base the whole system — processing, flow and memory — on light. There have been previous attempts to create this kind of photonic memory storage before, but they proved too volatile to be useful — they require power to store data. For them to be useful as computer disk drives, for example, they need to be able to store data indefinitely, with or without power.

A bright future for data storage

The device uses the phase-change material Ge2Sb2Te5 (GST) — the same as that used in rewritable CDs and DVDs — to store data. The material can assume an amorphous state (like glass) or a crystalline state (like a metal) when subjected to either an electrical or optical pulse.

To take advantage of this property, the team fused small sections of GST onto a silicon nitride ridge (known as a waveguide) that carries light to the chips, and successfully proved that intense pulses sent through the waveguide can produce the desired changes in the material. An intense pulse causes it to momentarily melt and quickly cool, causing it to assume an amorphous structure; a slightly less-intense pulse can put it into a crystalline state. This is how the data is stored.

Later, when the data is required, light with much lower intensity is sent through the waveguide. The two states of the GST dictates how much light can pass through the chip, the difference is read and interpreted as either 1 or 0.

“This is the first ever truly non-volatile integrated optical memory device to be created,” explains Clarendon Scholar and DPhil student Carlos Ríos, one of the two lead authors of the paper. “And we’ve achieved it using established materials that are known for their long-term data retention — GST remains in the state that it’s placed in for decades.”

And by sending out different wavelengths of light through the waveguide at the same time, a technique called wavelength multiplexing, they can use a single pulse to encode and recover the data at the same time.

“In theory, that means we could read and write to thousands of bits at once, providing virtually unlimited bandwidth,” explains Professor Wolfram Pernice from the University of Munster.

The researchers have also found that different intensities of strong pulses can accurately and repeatedly create different mixtures of amorphous and crystalline structure within the GST. When lower intensity pulses were sent through the waveguide to read the contents of the device, they were also able to detect the subtle differences in transmitted light, allowing them to reliably write and read off eight different levels of state composition — from entirely crystalline to completely amorphous. This multi-state capability could provide memory units with more than the usual binary information of 0 and 1, allowing a single bits of memory to store several states or even perform calculations themselves instead of at the processor.

“This is a completely new kind of functionality using proven existing materials,’ explains Professor Bhaskaran. ‘These optical bits can be written with frequencies of up to one gigahertz and could provide huge bandwidths. This is the kind of ultra-fast data storage that modern computing needs.”

Now, the team is working on a number of projects that aim to make use of the new technology. They’re particularly interested in developing a new kind of electro-optical interconnect, which will allow the memory chips to directly interface with other components using light, rather than electrical signals.