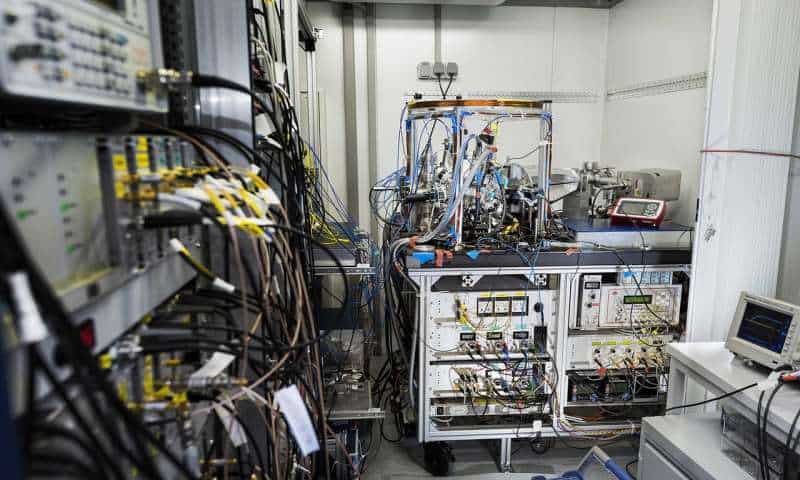 One of the most delicate clocks in the world was recently taken for a spin by European scientists. For the first time, a transportable optical atomic clock has been used to make measurements in the field. Experts hope that this proof of concept will pave the way for a wide adoption of mobile atomic clocks around the world, vastly reducing costly errors in engineering and construction projects, but also helping research in climate or geophysics.

Optical atomic clocks represent the state-of-the-art in the frontier of modern measurement science (metrology). All clocks tell the time using a stable oscillator, whether we’re talking about a grandfather clock, which is based on a pendulum, or a sundial clock, which relies on the planet’s rotation. In an optical atomic clock, the oscillator is a laser which is regulated by the quantum oscillations of atoms. These are the most precise clocks in existence today, employing lasers with frequencies in the 100s of terahertz range. This means that these clocks ‘tick’ about a quadrillion (one million billion) times per second.

Researchers from the National Physical Laboratory (NPL), the Physikalisch-Technische Bundesanstalt (PTB) and the Istituto Nazionale di Ricerca Metrologica (INRIM) used their transportable optical atomic clock to measure the gravity potential difference between the exact location of the clock positioned in the middle of the Fréjus road tunnel between France and Italy and a second clock at INRIM, which is 90 km away in Torino, Italy. The height difference between the two clocks is about 1,000 meters.

To accurately compare the readings of the two clocks, the researchers set up a 150 km-long optical fiber link and employed a frequency comb to connect the clocks to the link. To verify the optical atomic clock measurements, the researchers also determined the gravity potential difference using more conventional methods like geodetic techniques. The two types of measurements were found to be consistent.

“Optical clocks are deemed to be the next generation of atomic clocks—operating not only in laboratories but also as mobile precision instruments,” said Christian Lisdat, group leader at PTB.

Of course, this isn’t exactly a wristwatch. The on-the-road optical atomic clock is pretty large, occupying much of the volume of a vibration-damped and temperature-stabilized trailer. 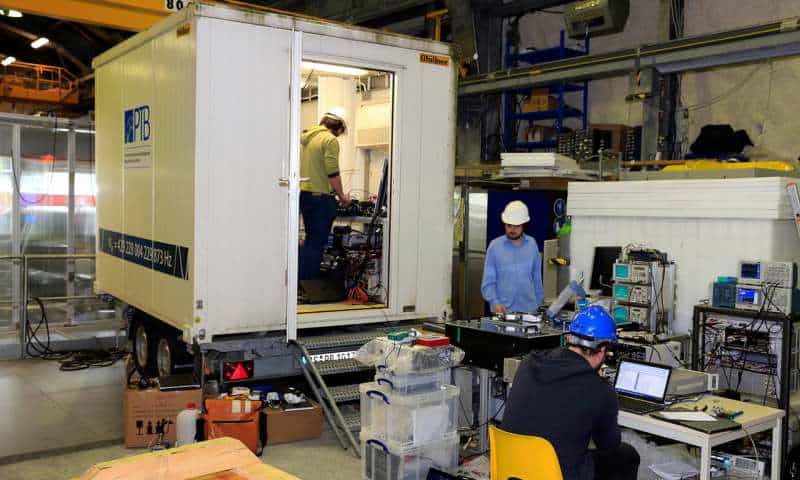 Researchers alongside the trailer that transported the atomic clock. Credit: PTB.

This sort of mobile optical atomic clock has the potential to resolve height differences as small as 1 cm across the planet’s surface. One of the biggest advantages of optical clocks is that they can take measurements at specific locations whereas satellite-based measurements average the gravity potential over lengths of about 100 km. As such, mobile optical atomic clocks positioned through all sorts of locations can lead to much higher-resolution measurements of the planet’s gravity potential.

A high-res map of Earth’s gravity potential would allow scientists to monitor sea levels and the dynamics of ocean currents with unparalleled accuracy — and all in real time. Researchers could also track seasonal trends in ice sheet masses and overall ocean mass changes, vastly improving the reliability of climate models and weather forecasts.

Optical atomic clocks could also save the industry billions by solving inconsistencies between national height systems. For instance, engineers who worked on the Hochrhein Bridge between Germany and Switzerland used different sea level calculations for each side, which lead to a 54cm level gap between the two sides.

“Our proof-of-principle experiment demonstrates that optical clocks could provide a way to eliminate discrepancies and harmonise measurements made across national borders. One day, such technology could help to monitor sea level changes resulting from climate change,” said Helen Margolis, fellow in optical frequency standards and metrology at NPL.