Sometimes, the most interesting treasures are hidden in plain sight. Recently, researchers realized that a collection of fossils from Australia, which have been understudied for 35 years, actually belong to a new dinosaur species. The remains include four individuals, signifying the first time a dinosaur herd has been unearthed in Australia as well as the most complete opalized dinosaur skeleton in the world.

The glittering fossils preserved in opal were first discovered in 1984 by Bob Foster, an Australian miner. Although he was annoyed by the fact that he had found bones in his opals, Foster still made a long 800-km trip to the Australian Museum in Sydney with two suitcases filled with opal fossils. But, for some reason, the specimens that Foster donated to the museum never received the attention they deserved — until recently. 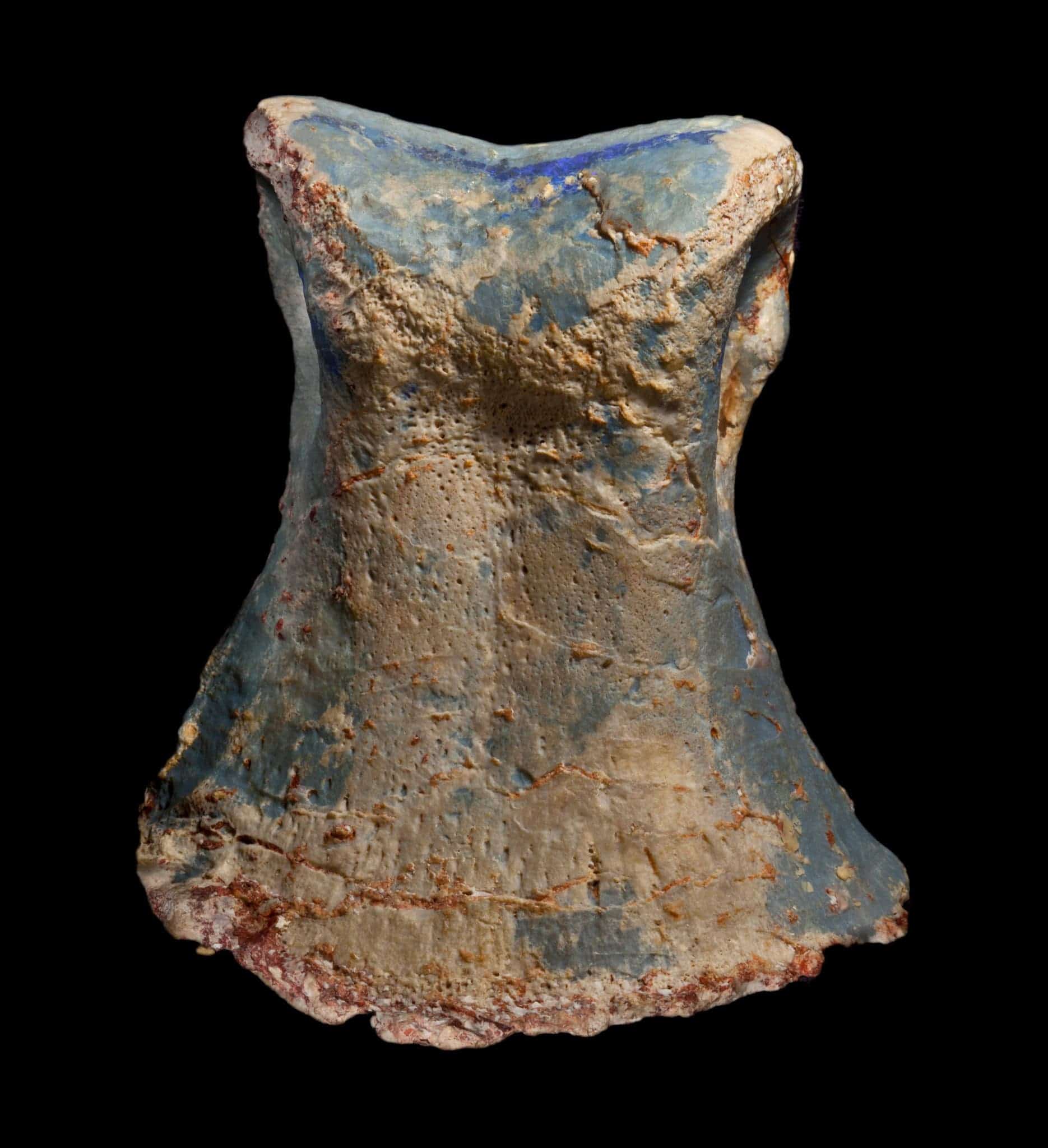 Finally, researchers at the University of New England in Armidale published a new study showing that the remains represent the biggest collection of dinosaur fossils preserved in opal. The mid-Cretaceous creatures belonged to a new species of dinosaur named Fostoria dhimbangunmal, in honor of the diligent miner who discovered the fossils.

According to paleontologists, the opal-encrusted fossils found at Lighting Ridge, a town about 450 miles (725 km) inland from Australia’s eastern coast, must belong to at least four different individuals. Two of them were up to 5 meters in length (16 feet), one was mid-sized, and another was a small juvenile. An unfused mid-caudal neural arch (a vertebra) suggests that the smaller animal had not yet reached skeletal maturity.

“We initially assumed it was a single skeleton, but when I started looking at some of the bones, I realized that we had four scapulae (shoulder blades) all from different sized animals,” said Phil Bell, lead researcher on the study. “Fostoria has given us the most complete opalized dinosaur skeleton in the world. For opalized dinosaurs we generally have only a single bone or tooth or in rare instances, a few bones. To recover dozens of bones from the one skeleton is a first.” 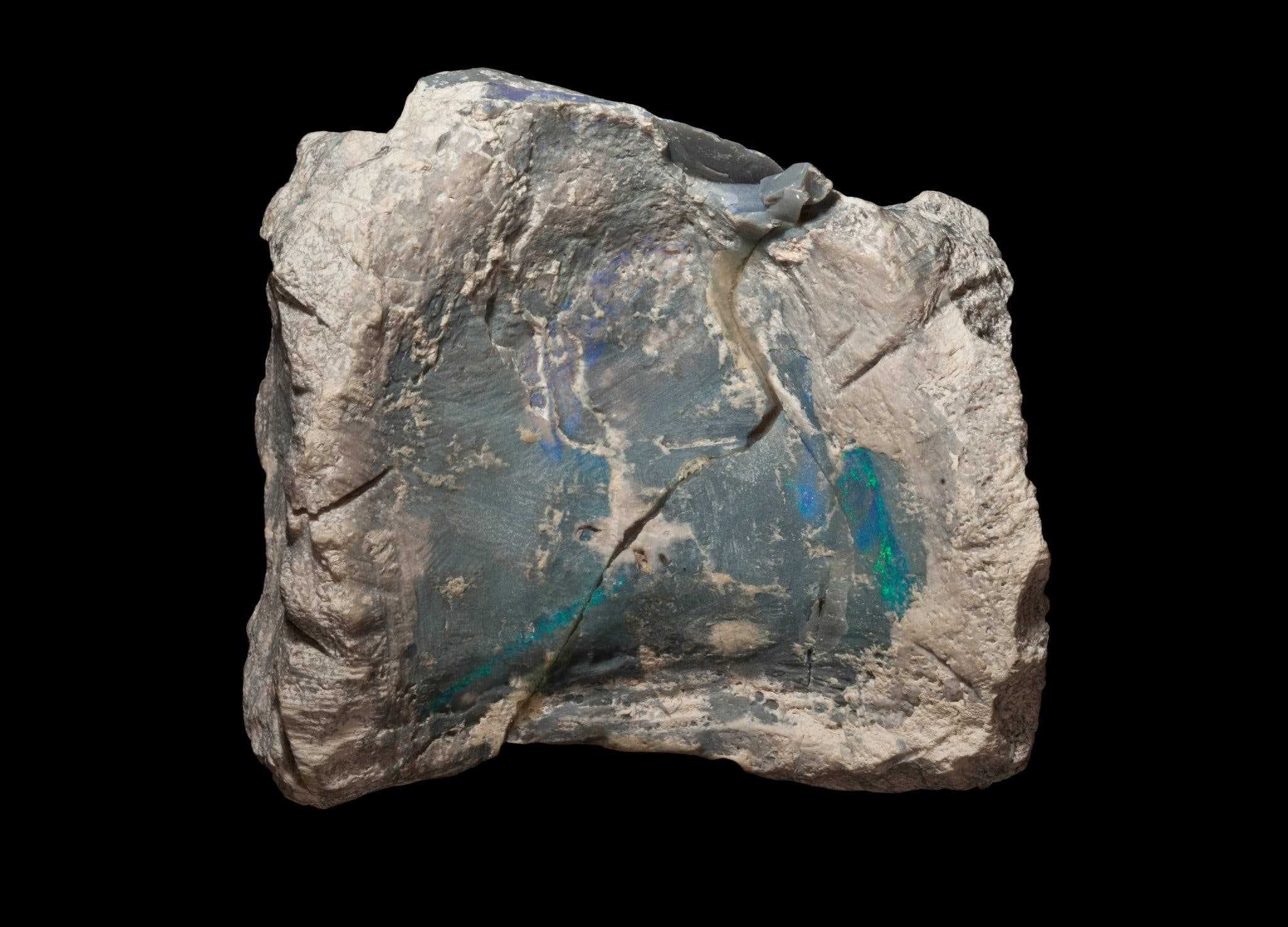 One of the backbones of Fostoria found in gemstones. Credit: Robert A. Smith, Australian Opal Center.

How the fossils became encased in opal is another interesting story. Australia was once home to an inland sea, but 100 million years ago it started disappearing. In the process, sandstone near Lightning Ridge started to dry and increase in acidity, releasing silica which eventually slowly hardened into opal inside the gaps left by the dinosaur remains.

“The rate of discovery is astounding. On average, there’s at least one new dinosaur discovered around the world every week,” Dr. Bell said. “With more palaeontologists and scientists looking further afield than ever before, it’s an exciting time for dinosaur lovers everywhere, especially in Australia.”

The findings appeared in the Journal of Vertebrate Paleontology.

Belemnites are an extinct order of cephalopods (“cephalo” meaning head and “pod” meaning leg) that lived during the Mesozoic era, some 200 to 65 million years ago. They were elongated organisms, resembling today’s squids, only tinier and cuter.

They were prey animals and had ten hooked tentacles that they used to catch and hold their food.

What sets them apart from squids is their internal skeleton, bullet-like structures called guards. The dazzling display you see here is one such guard that fossilized through a process known as opalization, by which organic matter is substituted with amorphous silica. In layman terms, this means replacing tissue with a non-crystallized, hydrated form of silicon dioxide.

This amorphous (glass-like) property causes opal to diffract light differently throughout its mass, giving the stone its hue and flecks of color as it catches rays of light.

As a geologist, I’m really not into gemstones and “pretty rocks” – but every once in a while, I see a rock so spectacular that it just blows my mind. Such is the case with “Virgin Rainbow”, a glorious opal unveiled by the South Australian Museum in Adelaide.

Estimated at over $1 million, the outstanding psychedelic specimen has an amazingly rich color palette and light refracting qualities. The opal will be exhibited as part of the museum’s larger “Opals” exhibition, which celebrates 100 years of opal mining in South Australia – the area that supplies 90% of the world’s opals. Ironically, the area that used to be covered in waters and riddled with marine dinosaurs is now a hot, barren wasteland.

“It is ironic that in the most harsh of terrains the most beautiful of naturally occurring gems are now found,” says Brian Oldman, the director for the South Australia Museum. “This is an exhibition literally millions of years in the making because these opals were formed back when dinosaurs walked the Earth and central Australia was an inland sea.”

In addition to many spectacular opals, the exhibition will also feature the history and culture of mining operations, including an in-depth look at the famous Tatooine-like mining town of Coober Pedy: a city built specifically for miners. What’s special about Coober Pedy is that almost the entire city was built underground, to protect the workers and their families from the extreme temperatures and massive dust storms.

“We want to showcase the history and beauty of the opal, as well as the hard work and dedication required of those who choose to mine it,” Oldman says. “There are even plans to recreate an underground opal mine inside the museum — complete with dirt brought in from Coober Pedy. 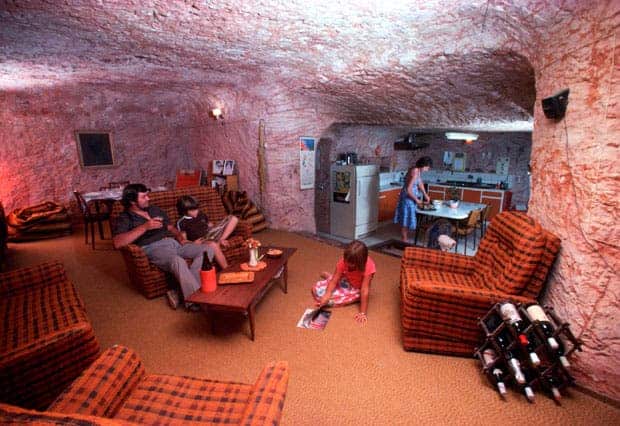 A “house” from Coober Pedy. Image via Better Architecture.

Below are some other spectacular opals featured in the exhibit, which opens Sept 25. 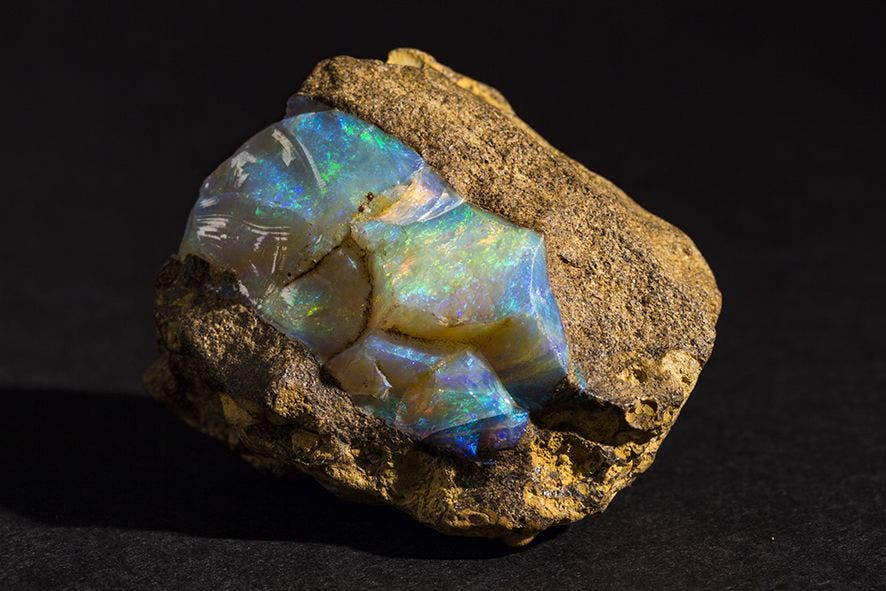 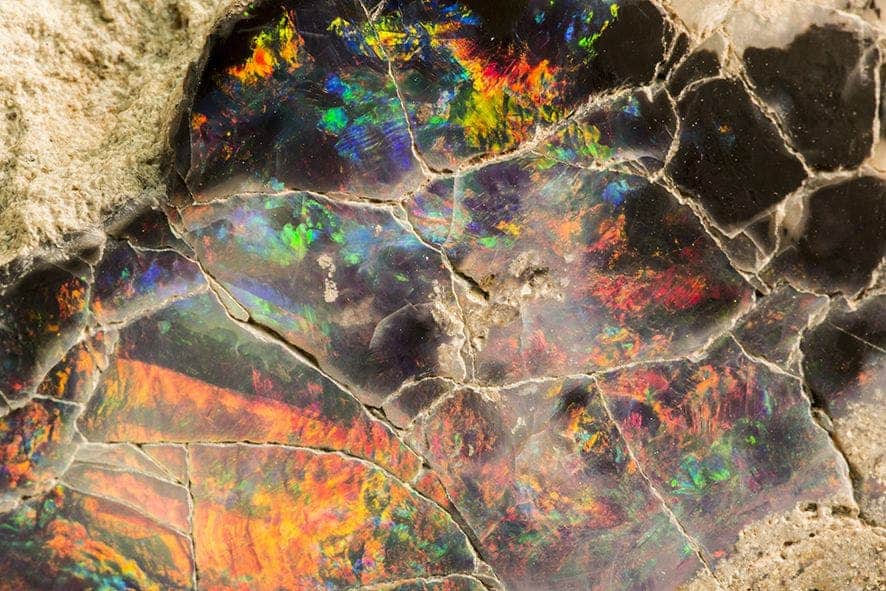 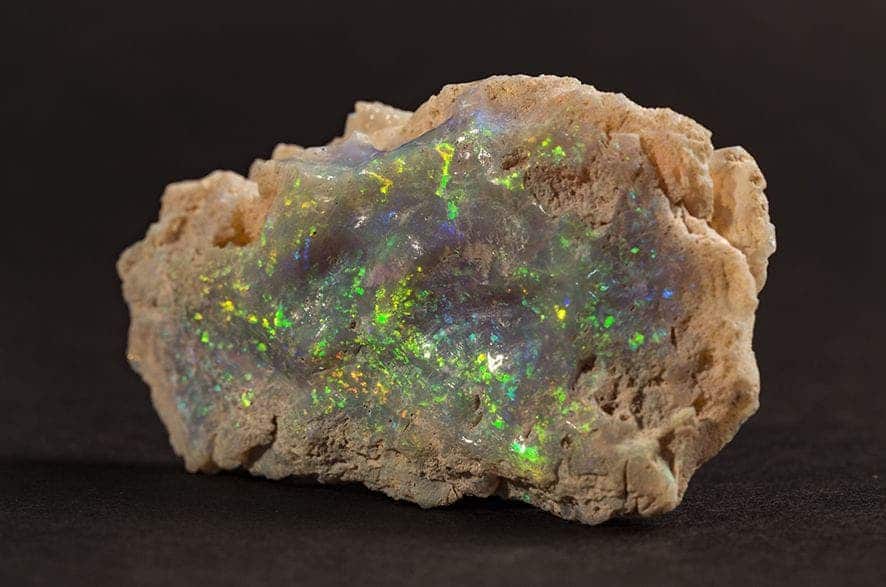 Opals are hydrated amorphous form of silica – amorphous as in not crystallized. Because it is amorphous, it is considered a mineraloid, and not a mineral. Water content may range from 3 to 21% by weight, but is usually between 6 and 10%. It is deposited at a relatively low temperature and may occur in the fissures of almost any kind of rock, being most commonly found with limonite, sandstone, rhyolite, marl, and basalt. Opal is the national stone of Australia. 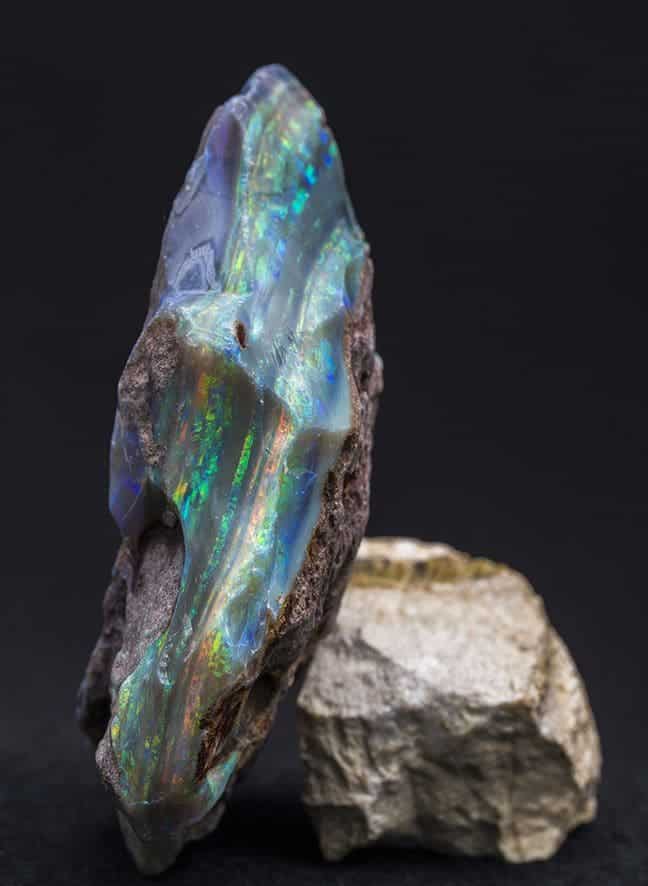 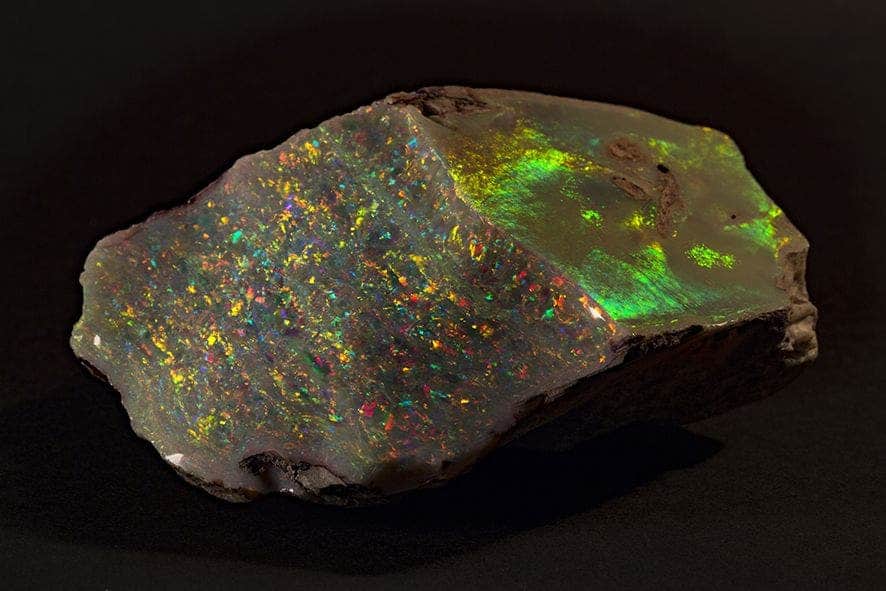 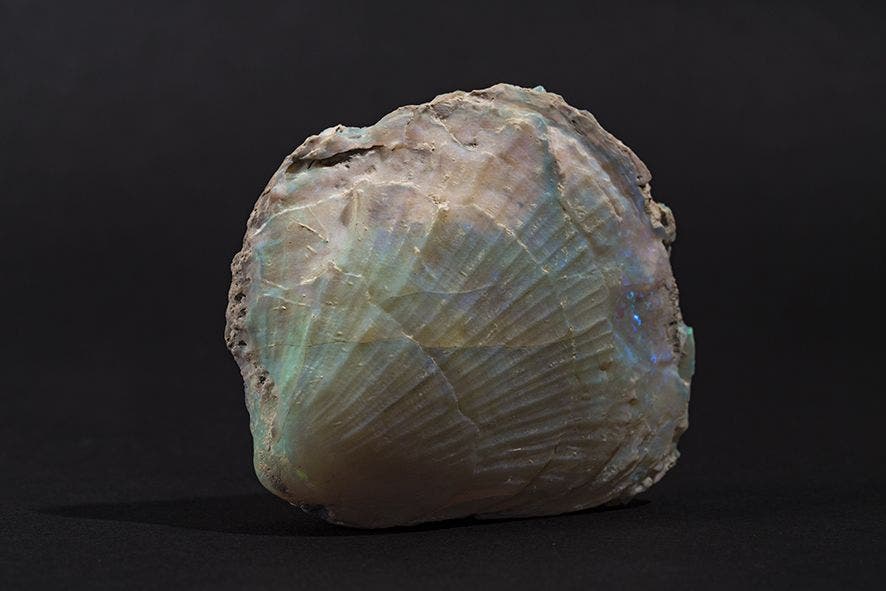 All images via South Australian Museum.

As a proud student in geophysics, I can tell you that opal is hydrated silicon dioxide mineral with many astounding properties, but it’s also water hydrated. Since  water hydrated minerals have been found on Mars we are led to the logic conclusion that when these minerals was formed, there was water on Mars.

Opals have been long prized for their beauty, but now scientists are appreciating them from a whole new perspective. The fact that they have been located there comes after ice on Mars has been found, and it expands the habitable space by a whole lot, as this finding shows that Mars has been wet for more than a billion years longer than the previous estimates. Whether the planet was suitable for life or not takes a whole new meaning after this.

“Water may have existed as recently as two billion years ago,” said John Hopkins University’s Scott Murchie, a lead scientist with the Mars Reconnaissance Orbiter team. “It extends the time range for liquid water on Mars, and the places where it might have supported life.”

These silica-based deposits are the third and more importantly, the youngest type of water-containing mineral which has been found on Mars. Contrary to them, the oldest hydrated materials are some phyllosilicates, which were formed more than 3 and a half billion years ago.