Underwater robots have recently made a discomforting discovery: the Gulf of Oman harbors a “dead zone” nearly the size of Florida. 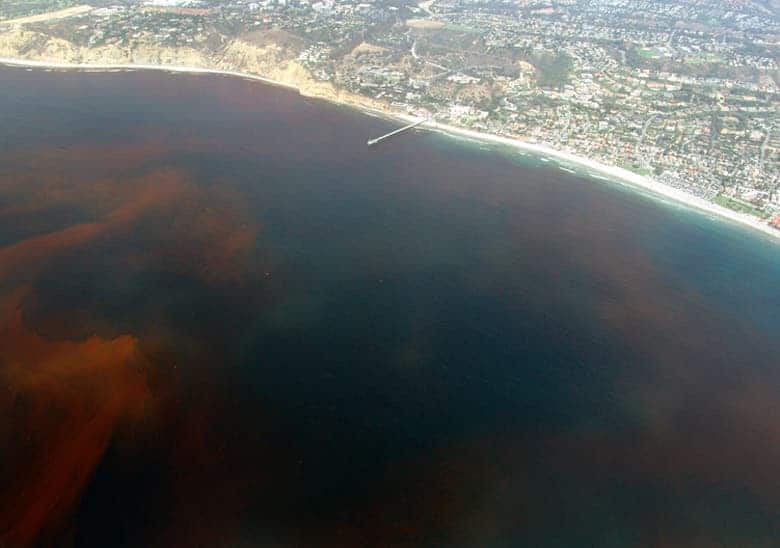 Dead zones are often caused by the decay of algae during algal blooms, like this one off the coast of La Jolla, San Diego, California. Image and caption credits: Alejandro Díaz / Wikimedia.

Remote-controlled submarines — sent forth by researchers from the University of East Anglia — have identified the world’s largest dead zone. This mass of water, spanning a chilling 63,700-square-mile (roughly 165.000 km²) area in the Gulf of Oman, is nearly devoid of oxygen. That’s an area comparable to the surface of Florida (170,305 km²), and over two times larger than Scotland (80,077 km²).

Although the technical term for such a place is an “oxygen minimum area”, their colloquial name of “dead zones” is quite apt. Marine flora and fauna are completely dependent on oxygen dissolved in the water for their survival. The absence of this element also alters the local nitrogen cycle, causing nitrous oxide emissions — which is a greenhouse gas 300 times more powerful than carbon dioxide.

Dead zones are generally the product of climate change-induced ecological shifts and/or chemical run-off from land — for example, from sewage or chemical fertilizers. One particularly worrying prospect is that as climate change makes ocean water warmer, it will be less able to hold oxygen — meaning more frequent and more intense dead zones.

“Our research shows that the situation is actually worse than feared – and that the area of dead zone is vast and growing,” said Dr Bastien Queste, who led the research. “The ocean is suffocating.”

Dead zones are “a disaster waiting to happen,” he adds.

The Gulf of Oman. Image via Google Earth.

The Gulf of Oman dead zone sits between a depth of 200 and 800 meters. The team report that it is made up of entirely anoxic or suboxic conditions — meaning there’s no oxygen or very low oxygen present, respectively.

Computer simulations, based on data the team recovered on site, revealed that the dead zone has increased both in size and severity since the 1990s and is still growing, the team reports. Unless addressed it could have drastic consequences for life both in and out of the sea.

“Another interesting question is now that the Gulf of Oman is clearly consuming oxygen faster than it is replenished, how much of that is exported to the Arabian Sea and making the wider Arabian Sea OMZ extend and grow even more?” Queste asks.

The next step for the team is to figure out whether this is due to the overall supply of oxygen decreasing, or an increased consumption of oxygen in the region.

The “Seaglider” robots that made the discovery possible are roughly the size of a person, but can spend several months at depths of 1,000 meters. In an article recently published in Geophysical Research Letters, the researchers note that access to these waters had previously been limited by “piracy and geopolitical tensions.”

The paper “Physical controls on oxygen distribution and denitrification potential in the north west Arabian Sea” has been published in the journal Geophysical Review Letters.

The Oman rocks that were used to reveal the causes of the Permian-Triassic Boundary extinction event.
Credit: Matthew Clarkson

Around 252 million years ago, the Earth experienced the biggest mass extinction event in its history. Referred to as both the Permian-Triassic extinction event and the Great Dying, it wiped out over 90 percent of marine life and approximately two-thirds of land-dwelling animals. Now, a new study sheds light on the causes of this event and reveals why the Earth’s marine creatures took so long to recover from it.

Although previous research pointed to a lack of dissolved oxygen and increase in sulphides in the Earth’s waters as the main cause of the mass extinction and the planet’s delayed recovery, the new study suggests that these anoxic conditions were complex and the high sulphide levels were not ubiquitous.

Using chemical techniques to analyze data from six sampling sites in Oman – spanning a range of shallow regions all the way to the deeper ocean – the team revealed that despite the lack of oxygen in the water, no toxic sulphides were present. Instead, the team noticed an increase in iron levels.

Contrary to previous beliefs, the new findings suggest that low oxygen in combination with high levels of iron – not sulphides – were the main causes of the delayed recovery of marine life that occurred following the Great Dying. Furthermore, the data suggests that some shallow waters did not suffer from the low oxygen levels present in other bodies of water, which likely helped increase the diversity of life in these areas.

“The neat point about this study is that it shows just how critical an absence of oxygen, rather than the presence of toxic sulphide, was to the survival of animal life,” said Simon Poulton of the University of Leeds and co-author of the study. “We found that marine organisms were able to rapidly recolonize areas where oxygen became available.”

Researchers believe that the anoxic conditions behind the Permian-Triassic extinction event likely stemmed from a combination of run-off from land rock erosion and high temperatures, although the exact causes of the extended recovery period are still not known.

“We knew that lack of oxygen in the oceans played a key role in the extinction and recovery processes, but we are still discovering how exactly it was involved,” said Matthew Clarkson of the University of Edinburgh’s School of GeoSciences and lead author of the study. “Our findings about the chemistry of the ocean at the time provide us with a clearer picture of how this complex process delayed the recovery of life for so long.”