The history of farming is what you might call a bit muddy. 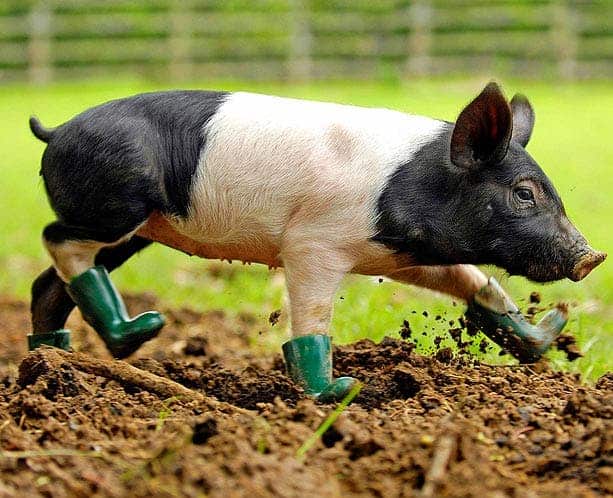 A new study published in PLOS ONE and led by Prof. Ehud Weiss of Bar-Ilan University in collaboration with Prof. Marcelo Sternberg of the Department of Molecular Biology and Ecology of Plants at TAU’s Faculty of Life Sciences and Prof. Ofer Bar-Yosef of Harvard University, among other colleagues, claims to have found the oldest evidence of agricultural practices in human history. The study focuses on the discovery of the first weed species at the site of a sedentary human camp on the shore of the Sea of Galilee.

Who were the first farmers?

Until now, it was generally agreed upon by the scientific community that agricultural practices were most likely independently developed somewhere around 15,000 to 12,000 years ago, by different peoples living in different areas.

Identifying an exact origin of agriculture remains problematic because the transition from hunter-gatherer societies began thousands of years before the invention of writing.

It isn’t until after 9,500 BC that evidence of the eight so-called “founder crops” of agriculture appeared: first emmer and einkorn wheat, then hulled barley, peas, lentils, bitter vetch, chick peas and flax. These eight crops occur more or less simultaneously on sites in the Levant, also known as the “Cradle of Civilization”, although the consensus is that wheat was the first to be sown and harvested on a significant scale. 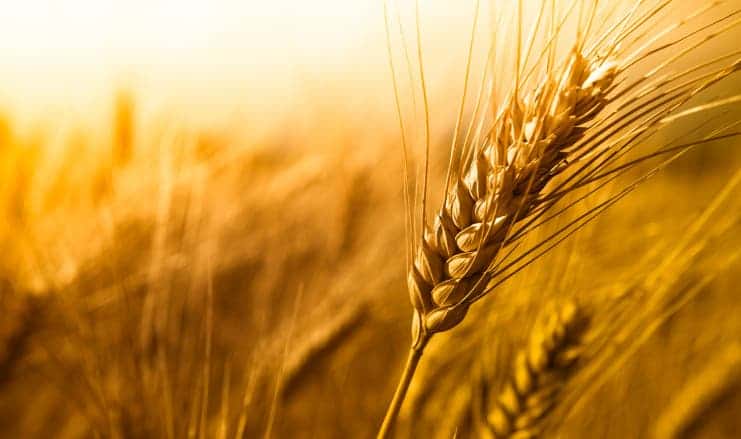 I eat, you eat, we all eat that yellow wheat!
Image via field-crops

By 7000 BC, sowing and harvesting reached Mesopotamia and there, in the fertile soil just north of the Persian Gulf, Sumerians systematized it and scaled it up. By 6000 BC farming was entrenched on the banks of the Nile River.

In Europe, there is evidence of emmer and einkorn wheat, barley, sheep, goats and pigs that suggest a food producing economy in Turkey, Greece and the Aegean by 7000 BCE. Archaeological evidence from various sites on the Iberian peninsula suggest the domestication of plants and animals between 6000 and 4500 BCE. Céide Fields in Ireland, consisting of extensive tracts of land enclosed by stone walls, date to 5500 BCE and are the oldest known field systems in the world.

And agriculture at this time wasn’t the primitive “hit dirt with stick, throw seed, seed grow, eat seed” method you’d expect either: by this time farmers knew how to use fertilizers, how to make cheese, and had knowledge of animal husbandry.

Farming changed our society from the ground up. It meant more food for, arguably, less effort, and less danger. It freed us up so we could think more, and go on to cook up wonderful new ways to torture our kids (I mean math).

However, that leaves the question, when was agriculture in that primitive state? Who, where and when “invented” farming?

The Ohalo site holds the answer

“While full-scale agriculture did not develop until much later, our study shows that trial cultivation began far earlier than previously believed, and gives us reason to rethink our ancestors’ capabilities,” said Prof. Sternberg. “Those early ancestors were more clever and more skilled than we knew.”

Although weeds are considered a nuisance by farmers, as they take nutrients and sunlight from the crops, their presence at the site of the Ohalo II people’s camp revealed the earliest signs of trial plant cultivation — some 11 millennia earlier than conventional ideas about the onset of agriculture.

The Ohalo II people were fishers hunter-gatherers who established a sedentary camp that is unusually well preserved. Having been charred, covered by lake sediment, and sealed in low-oxygen conditions it provided ideal conditions for the preservation of plant material. Researchers examined the weed species for morphological signs of domestic-type cereals and harvesting tools, although their very presence is evidence itself of early farming.

“Because weeds thrive in cultivated fields and disturbed soils, a significant presence of weeds in archaeobotanical assemblages retrieved from Neolithic sites and settlements of later age is widely considered an indicator of systematic cultivation,” according to the study.

“This uniquely preserved site is one of the best archaeological examples worldwide of the hunter-gatherers’ way of life,” said Prof. Sternberg. “It was possible to recover an extensive amount of information on the site and its inhabitants.”

The site includes the remains of six shelters, and a very rich assemblage of plants. After retrieving and analyzing nearly 150,000 plant specimens, it’s been determined that the inhabitants had gathered over 140 species of plants, including 13 known weeds mixed with edible cereals such as wild emmer, wild barley, and wild oats.

The researchers found a grinding slab — a stone tool with which cereal starch granules were extracted — as well as a distribution of seeds around this tool, reflecting that the cereal grains were processed for consumption. The large number of cereals showing specific kinds of scars on their seeds indicate the likelihood of those cereals growing in fields, and the presence of sickle blades indicates that these humans deliberately planned the harvest of cereal. 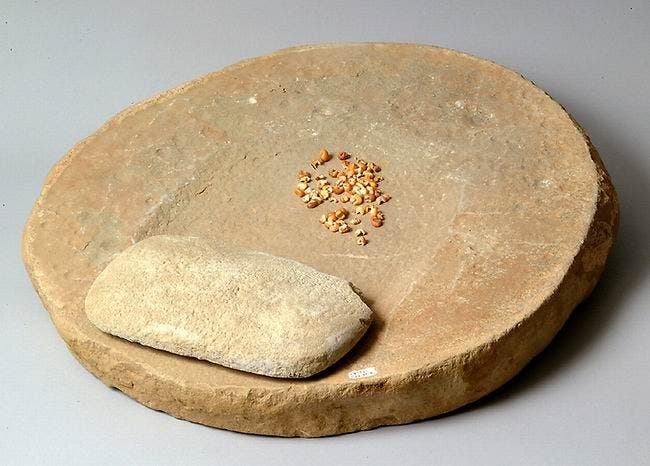 “We call it Coffee, ’cause it grinds so fine.” – Ohalo II, presumably.
Image via wikipedia