US president Barack Obama and Canadian prime minister Justin Trudeau have designated the bulk of U.S. and Canada owned waters in the Arctic Ocean as indefinitely off limits for Arctic drilling.

“Today, President Obama and Prime Minister Trudeau are proud to launch actions ensuring a strong, sustainable and viable Arctic economy and ecosystem, with low-impact shipping, science based management of marine resources, and free from the future risks of offshore oil and gas activity,” the statement read.

The move adds a finishing touch to Obama’s environmental legacy, one which president-elect Donald Trump has sworn to undo. However, environmental groups hope that this decision will be hard to overcome by future presidents. The move is expected to raise the income of local people.

However, oil industry officials have protested the move, arguing that it undermines America’s position as an energy leader.

“Instead of building on our nation’s position as a global energy leader, today’s unilateral mandate could put America back on a path of energy dependence for decades to come,” said Dan Naatz of the Independent Petroleum Association of America.

Oceana is the ocean conservation organization, and they’ve been doing a series of infographics which I found absolutely fantastic! So I’d like to share them with you, in the hope that you will too, as well as learn something.

Infographic: Where Does Our Seafood Come From?
Link 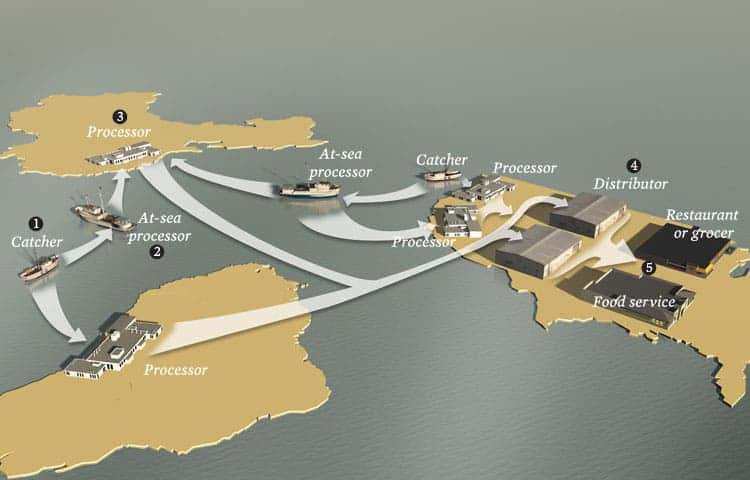 Eighty-four percent of seafood eaten in the U.S. is imported, and it follows an increasingly complex path from a fishing boat to our plates. After they are taken from the oceans, fish and shellfish are frozen, with their head and guts being removed, for easier transportation and avoiding spoilng. At the main processing center, they are trimmed, deboned, breaded, cooked, and packaged for wholesale or retail sales. At this stage, the fish is refrozen and labeled as a “product of” the country where processing takes place, often omitting where it was farmed or captured. 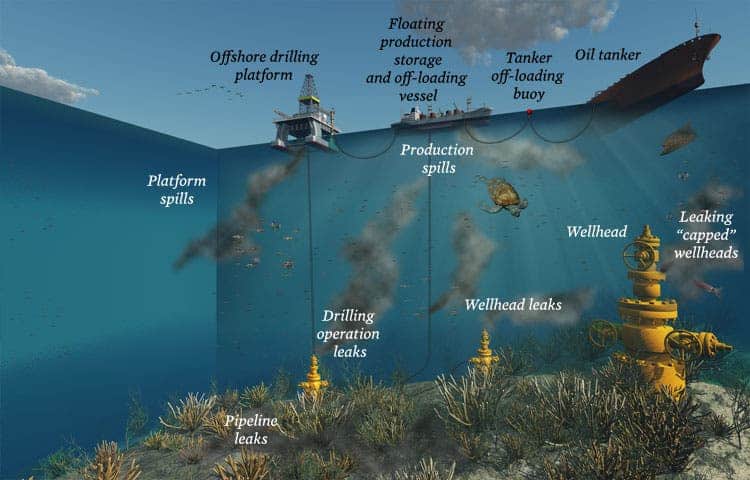 The “small spills” associated with oil extraction, transportation, and consumption add up to about 195 million gallons every year. That’s as much as one Deepwater Horizon gusher. They are indeed small, compared to the everyday drilling and extracting chronic leaks that add up to 11 million gallons of oil pollution annually. Transporting oil is also a major source of pollution, adding up to 44 million gallons per year. 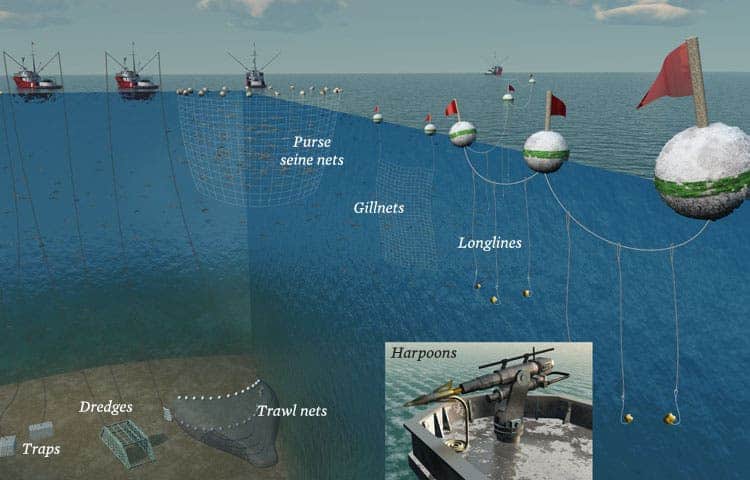 Dredges catch scallops and fish by dragging across the seafloor. They can crush corals, catch sea turtles, and dis­turb all kinds of seafloor life.

Purse seine nets catch schooling fish like tuna by en­circling the school with a wall of netting. They can cap­ture dolphins and other natural predators feeding on the school.

Trawl nets catch shrimp, cod, haddock, and other fish. Bottom trawls drag weighted nets across the seafloor, crushing corals or any other marine life in their path. Bot­tom trawls also discard more unwanted fish than almost any other form of fishing and are extremely destructive. Midwater trawls drag large nets through the water to catch pollock and other schooling fish, and when their nets are full, they may also drag on the bottom.

Gillnets are one of the most widely used methods in the world for catching salmon and sharks. When not closely tended, gillnets can entangle and drown sea turtles, sea­birds, and marine mammals. Some gillnets also snag large numbers of juvenile fish, which contributes to overfishing.

Longlines catch tuna and swordfish with miles of baited hooks that also capture sea turtles, sharks, and endan­gered sawfish. One longline can have thousands of hooks.

The Rise and Fall of a Coral Reef
Link 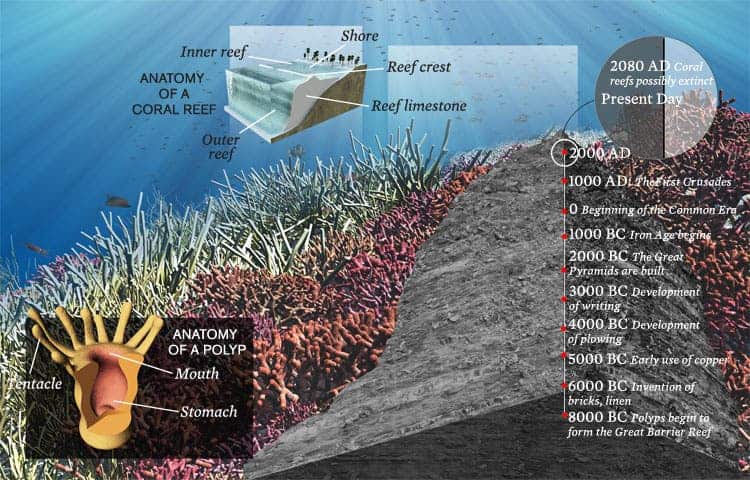 Coral reefs are built by tiny, soft coral animals, or polyps. These polyps are relatives of jellyfish and have evolved to secrete calcium carbonate skeletons that provide the polyp with structure and protection.

Coral reefs and other species in the oceans have lived in levels of acidity that have remained relatively unchanged for at least the last 20 million years. But thanks to human-produced carbon dioxide emissions, the oceans are now 30 percent more acidic than they were prior to the industrial revolution and more acidic than at any point over the past 20 million years. Corals and other species are unlikely to be able to adapt to this rapid, sizable change in acidity and are likely to suffer severe decline.