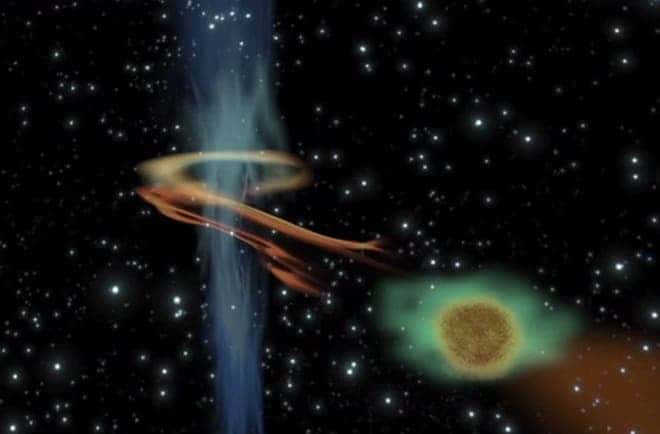 In an unexpected discovery, astronomers have surprised a supermassive black hole that had been dormant for the past decades “waking up” and feasting upon an unsuspecting planet that had drifted too close to its event horizon.  The mass of the planet hints towards a giant Jupiter or a small brown dwarf. Also, a similar event is set to take place in our galaxy soon, after observations of the supermassive black hole lying at the center of our own galaxy showed that it will engage in a similar feeding event, albeit on a gas cloud.

The event was picked-up by the European INTEGRAL space observatory, which surveys the cosmos for high-energy emissions of gamma-rays and X-rays. At the time, INTEGRAL was studying a different galaxy, but a sudden energy flare at NGC 4845, a spiral galaxy some 47 million light-years away, caught the attention of astronomers and it could mean only one thing – the supermassive black hole deep in the galaxy’s bawls had woken up after more than 30 years. Follow-up observations from ESA’s XMM-Newton, NASA’s Swift and Japan’s MAXI X-ray monitor on the International Space Station confirmed the finding.

Technically however there’s no such thing as an inactive black hole, but what the researchers describe through this “hibernation” metaphor is a lack of feeding over a long period of time.

“The observation was completely unexpected, from a galaxy that has been quiet for at least 20–30 years,” said Marek Nikolajuk of the University of Bialystok, Poland, lead author of the research published in the journal Astronomy & Astrophysics.

By analyzing the intensity and duration of the feeding, which peaked in January 2011 and then slowly subsided over the course of a year, the astronomers could infer the mass of the black hole’s meal. Subsequent analysis showed that the object must have been somewhere in the mass range of 14–30 Jupiter masses, consisting with a giant nomad planet (planet’s that stray and travel through interstellar space) or a brown dwarf (substellar objects that are not massive enough to fuse hydrogen in their core and ignite as stars).

A sleeping giant just woke up and it’s damn hungry

The black hole wasn’t just satisfied with having a hefty meal, however. It toyed with its preyed and tormented it, as analysis showed X-ray emissions fluctuated over 2-3 months, suggesting the object passed close, suffered some extreme tidal shear, causing layers of gas to be ripped away before the whole thing was finally consumed. If you’re interested, ESA has a video simulation of the event here.

“This is the first time where we have seen the disruption of a substellar object by a black hole,” said co-author Roland Walter of the Observatory of Geneva, Switzerland.
“We estimate that only its external layers were eaten by the black hole, amounting to about 10% of the object’s total mass, and that a denser core has been left orbiting the black hole.”

According to the researchers, the flaring event in NGC 4845 was a warm-up for a more interesting “black hole in action” study, right in our backyard. Later this year, the Milky Way’s supermassive black hole is expected to commence feeding on a straying giant gas cloud. The cloud is already suffering extreme disruption and is expected to meet its end soon enough. By studying events such as NGC 4845’s flaring or the upcoming gas cloud gobbling by our closest supermassive black hole, scientists can deepen our understanding and learn new things about what happens to cosmic objects as they encounter black holes of various sizes.

“Estimates are that events like these may be detectable every few years in galaxies around us, and if we spot them, Integral, along with other high-energy space observatories, will be able to watch them play out just as it did with NGC 4845,” added Christoph Winkler of the European Space Agency (ESA).

It’s December 21, 2012. Nibiru, or Planet X as some call it, is going to collide or just barely miss a collision with planet Earth, and the consequences will be devastating.

The idea was first started in 1995 by Nancy Lieder, founder of the website ZetaTalk. She describes herself as a contactee with the ability to receive messages from extra-terrestrials from the Zeta Reticuli star system through an implant in her brain. She claims she was chosen to warn mankind that the object will zoom by Earth in 2003 causing its poles to switch, but, well, that was cancelled, so now the impact is rescheduled for 2012.

Lieder described Planet X as roughly four times the size of the Earth, and said that its closest approach would occur on May 27, 2003, resulting in the Earth’s rotation ceasing for exactly 5.9 terrestrial days. She even went as far as to say that people should put their pets down in anticipation of the event. She also stated that “A dog makes a good meal“.

Calling this pseudoscience would be a stretch – it’s just borderline madness. If there somehow was a rogue planet well on its way for Earth, we would see it; every professional and even many amateur astronomers would see it. Even if it were somehow invisible, we would see the effects on other planets in the solar system. Oh, but wait!

People who actually believe this think that astronomers are all working together and keeping it a secret. Seriously, you try to convince the entire scientific community, every space agency, every nation and many amateur astronomers to keep a secret together – that would be something.

“Put your pets down“… This woman should be in a facility if you ask me.

Read about other popular Mayan doomsday “prophecies” from our debunking series:

Some time ago we told you about one of the most fascinating facts this blog has ever published, namely how there are “nomad” or “rogue” planets outside our solar system, which travel aimlessly through interstellar space without having to circle a certain star. It’s estimated that there are actually more such nomad planets haunting through space in the Milky Way than there are stars.

A new study, authored by  Hagai Perets, of the Harvard-Smithsonian Center for Astrophysics and Thijs Kouwenhoven of China’s Peking University, found that there was a  3 to 6 percent chance a star would snag a free-floating planet and lock it into its orbit, after simulating the evolution of young star clusters. They studied young star clusters because capture is more likely when stars and free-floating planets are crowded together in a small space.

It seems rogue stars are a very natural consequence of star formation. When a new solar system is formed, it’s common for two planets to interact and thus one of them becomes ejected, doomed to free travel through interstellar space, until it may finally encounter a star massive enough to pull it in and hitch a ride. This explains why there are some solar systems with planets incredibly far away from the star their orbiting, in total discrepancy to the respective star’s mass. Also rogue stars orbiting a new home-star are likely to have orbits that are tilted relative to any “native” planets, and they may even revolve around their stars “backward,” researchers said.

That’s the theory, but it’s very difficult for scientists to assert that a certain planet wasn’t actually formed in its current solar system, but instead hitched a long time after. One of the most conclusive piece of evidence astronomers have backing up the idea that rogue plants actually do happen to attach themselves to new solar system is a 2006 discovery. Then, scientists found a huge planetary duo – 14 and respectively 7 times more massive than Jupiter – orbiting each other without a star in their vicinity.

Concerning our own solar system, astronomers have scoured to the very outskirts and have yet to find any signs of a new planet, such a presence being deemed highly unlikely.

“There’s no evidence that the sun captured a planet,” Perets said. “We can rule out large planets. But there’s a non-zero chance that a small world might lurk on the fringes of our solar system.”

According to a recent study published by researchers from the Kavli Institute for Particle Astrophysics and Cosmology (KIPAC), our galaxy may be ‘infested’ with nomad planets, which wander aimlessly instead of orbiting a star. Furthermore, the study concluded there may actually be 100,000 times more “nomad planets” in the Milky Way than stars.

If this theory is proven correct, it will severely affect our current understanding about planetary formation and will even affect what we think about the origin and abundance of life in our galaxy.

“If any of these nomad planets are big enough to have a thick atmosphere, they could have trapped enough heat for bacterial life to exist,” said Louis Strigari, leader of the team that reported the result in a paper submitted to the Monthly Notices of the Royal Astronomical Society.

The thing is, even though these planets don’t have the luxury of a star to offer them warmth, they might generate enough heat to support life through radioactive decay and tectonic activity. Past studies have shown more than 500 planets outside our solar system, almost all of which orbit stars, and last year alone, astronomers identified about a dozen nomad planets, through a technique called gravitational lensing, which analyzes stars whose light is momentarily refocused by the gravity of other passing planets.

The traditional belief was that roughly two nomads exist for every typical, so-called main-sequence star in our galaxy, but this new research showed that nomad planets may actually be 50.000 times more frequent than that.

“To paraphrase Dorothy from The Wizard of Oz, if correct, this extrapolation implies that we are not in Kansas anymore, and in fact we never were in Kansas,” said Alan Boss of the Carnegie Institution for Science, author of The Crowded Universe: The Search for Living Planets, who was not involved in the research. “The universe is riddled with unseen planetary-mass objects that we are just now able to detect.”

“Few areas of science have excited as much popular and professional interest in recent times as the prevalence of life in the universe,” said co-author and KIPAC Director Roger Blandford. “What is wonderful is that we can now start to address this question quantitatively by seeking more of these erstwhile planets and asteroids wandering through interstellar space, and then speculate about hitchhiking bugs.”