There are millions of species on Earth, and naturally understanding the mechanics of evolution is of great importance for understanding further on what sparks life. What sparks consciousness, well that’s a whole different ball-game. Currently, scientists are concentrating on how diversification occurs in order to better their knowledge of how so many species surfaced along the eons. Is this task impossible though? Is evolution itself predictable? 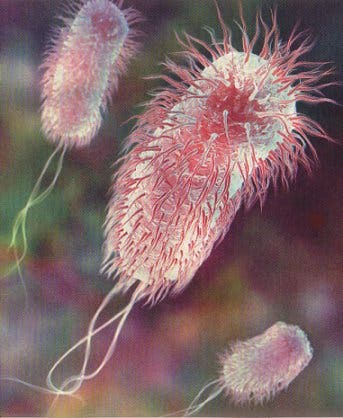 A recent research by scientists at University of British Columbia seems to suggests so, after they breaded three separate populations of the popular lab pet bacteria, E. coli, for a whooping 1200 generations. What they found is that eventually each population, though separate and independent from each other, evolved in very similar and in some respects identical strains to accommodate to their new environments.

Conducted by Matthew Herron and Michael Doebeli, the experiment involved placing each of the E. coli populations in an environment with two different sources of dietary carbon – glucose and acetate. In the beginning all bacteria behaved as generalists, after some 1200 generations though the bacteria branched into two distinct species, each specialized on eating one of the two food sources. This happened in each of the three separate populations.

Simple empirical observations weren’t enough, so prudent as they are, the scientists were careful to freeze samples from each population at 16 different points during their evolution. Recent advances in sequencing technology allowed the scientists to sequence large numbers of whole bacterial genomes, so the researchers had now access to a large volume of highly valuable data.

What they found was absolutely striking similarities in how the bacteria evolved. Basically, for all populations a core set of genes were causing the two different phenotypes that they saw, and in some cases the researchers witnessed the very same exact genetic change at play.

“There are about 4.5 million nucleotides in the E. coli genome,” said co-author Matthew Herron, research assistant professor at the University of Montana. “Finding in four cases that the exact same change had happened independently in different populations was intriguing.”

The obvious conclusion: selection can be deterministic.

“Not only did similar genetic changes occur, but the temporal sequence in which the changes occur over evolutionary time was also similar between the different evolving populations. This ‘parallelism’ implies that diversification is a deterministic process driven by natural selection,” said co-author and University of British Columbia zoologist Prof. Michael Doebeli.

The authors claim that negative frequency dependence – a well known particular form of selection – plays a major role in driving diversification. Simply put, a bacteria specialized on feeding on an alternative resource will be at an advantage, and thus have greater chances of passing its genes.

Is this research flawed, however? Considering the study only focuses on only a single type of bacteria, this might be the case. Evolution is not simple, by any means, and despite it might be governed by a fixed set of laws, the fabrics of its creation can be rather startling.

Nevertheless, the authors plan on repeating the experiment and conduct other more in order to see whether these conclusions remain the same at a larger scale and with larger, more complicated organisms.

Findings were published in the  journal PLOS Biology.