A team of US researchers has developed a light, but incredibly strong new material — they’re calling it metallic wood. This material, despite being a porous sheet of nickel, is as strong as titanium but four to five times lighter.

A microscopic sample of the researchers’ “metallic wood.”
Image credits University of Pennsylvania.

The way atoms stack in a lump of metal determines how strong that metal is — but we can’t (yet) produce such objects. For example, a sample of perfectly-stacked titanium would be ten times as strong as any titanium we can create today. This comes down to random defects that form in the manufacturing process, impacting the metal’s overall properties.  Materials researchers have been trying to exploit this phenomenon by taking an architectural approach, controlling the metal’s nanoscale layout to unlock the mechanical properties that arise at the nanoscale, where defects have reduced impact.

In a new study, researchers at the University of Pennsylvania’s School of Engineering and Applied Science, the University of Illinois at Urbana-Champaign, the Middle East Technical University in Turkey, and the University of Cambridge have designed a new material in which every atom is carefully laid out in its correct place, leading to a surprisingly high strength-to-weight ratio.

“The reason we call it metallic wood is not just its density, which is about that of wood, but its cellular nature,” says lead author James Pikul, Assistant Professor in the Department of Mechanical Engineering and Applied Mechanics at Penn Engineering.

The team writes that the material’s porous nature and the self-assembly process in which it’s created make it akin to wood and similar natural materials. Their metallic wood is made up of dense, strong metallic struts surrounding empty pores. The design operates “at the length scales where the strength of struts approaches the theoretical maximum,” Pikul explains.

Pikul’s team started with tiny plastic spheres of a few hundred nanometers in diameter, which they suspended in water. As the water slowly evaporated, the spheres stacked onto each other into an orderly, crystalline framework. The spheres were electroplated with nickel, then dissolved — leaving behind a network of metallic struts.

The fabrication process for a unit cell of the material. (b–g) Cross section SEM images of the (nickel inverse opal) material.

Each strut is around 10 nanometers wide, which is roughly the length of 100 nickel atoms, they explain. The team favored this production method over other techniques like 3D-printing as it’s easier to scale up.

“We’ve known that going smaller gets you stronger for some time,” Pikul says, “but people haven’t been able to make these structures with strong materials that are big enough that you’d be able to do something useful. Most examples made from strong materials have been about the size of a small flea, but with our approach, we can make metallic wood samples that are 400 times larger.”

“We’ve made foils of this metallic wood that are on the order of a square centimeter, or about the size of a playing die side,” he adds. “To give you a sense of scale, there are about 1 billion nickel struts in a piece that size.”

Because some 70% of the material is empty space, it has extremely low density in relation to its strength. It’s just a tad less dense than water, meaning a block of this material could float while still being stronger than most metal alloys today.

The team is now focusing on expanding the production process to commercially relevant sizes. The materials used aren’t particularly rare or expensive on their own, but the infrastructure needed to carry out the production process is currently very limited. If that infrastructure is developed, however, the team is confident that their metallic wood can be produced more quickly and cheaply than their prototype sample.

A larger production base would also allow the team to further test their creation. Since they’ve only produced a tiny sample in the lab, the team is limited in what macroscale tests it can run on the material.

“We don’t know, for example, whether our metallic wood would dent like metal or shatter like glass.” Pikul says. “Just like the random defects in titanium limit its overall strength, we need to get a better understand of how the defects in the struts of metallic wood influence its overall properties.”

Another exciting possibility is merging the metallic wood with other materials to tailor it to a wide range of applications. Infusing it with anode and cathode materials, for example, would essentially turn the metallic wood into a very solid battery.

“The long-term interesting thing about this work is that we enable a material that has the same strength properties of other super high-strength materials but now it’s 70 percent empty space,” Pikul says.

“And you could one day fill that space with other things, like living organisms or materials that store energy.”

For example, the material could be used to produce smart prosthetics that store their own power — which would be pretty sweet.

The paper “High strength metallic wood from nanostructured nickel inverse opal materials” has been published in the journal Nature.

The veined wing of the clanger cicada kills bacteria is able to destroy bacteria by its structure alone – one of the first structures ever found that can do this.

The clanger cicada is an insects that looks like something between a fly and a locust; its wings are covered with a vast hexagonal array of ‘nanopillars’ – basically blunted spikes with sizes comparable to that of bacteria. What happens is that when a bacteria settles on this surface, its cellular membrane sticks to the surface of the nanopillars and stretches into the crevices between them, where it experiences the most strain. When the stretch is powerful enough, the membrane ruptures.

Lead study author Elena Ivanova of Australia’s Swinburne University of Technology in Hawthorne, Victoria worked with a team of biophysicists to come up with an advanced nanoscale model of how this happens. She explains that the rupture is much like “the stretching of an elastic sheet of some kind, such as a latex glove. If you take hold of a piece of latex in both hands and slowly stretch it, it will become thinner at the center, [and] will begin to tear”. 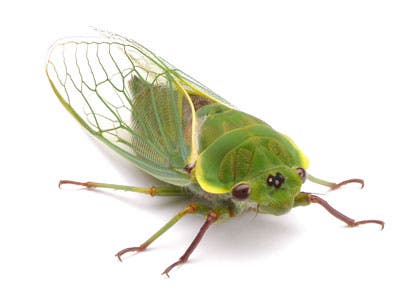 To test their model, the team irradiated bacteria with microwaves to generate cells that had different levels of membrane rigidity. If the model was correct, then the more rigid bacteria would be less likely to rupture between the nanopillars. The results validated their model, but also showed that not all bacteria are destroyed – only those with soft enough membranes.

Further study of the cicada’s wing is needed before its physical-defence properties can be mimicked in man-made materials, but doctors are already rubbing their hands, because if this can be replicated, it could be very useful (say) in hospitals and rooms which you want to keep as bacteria-free as possible.

“This would provide a passive bacteria-killing surface,” she says, adding that it “does not require active agents like detergents, which are often environmentally harmful”.

In what can only be hailed as a breakthrough in the “smart drugs” field, scientists at Harvard University have successfully managed to create nanorobots made out of strands of DNA, folded together by the DNA origami method. These act like drug-carrying recipients, which specifically target various types of cells and deliver complex molecular instructions – like telling cancer cells to self-destruct.

The shape and structure of the nanobots was critical to their success. The team designed a clam-like device, using DNA modelling software that can compute and complement inputted shapes with the right kinds of DNA strands, of the right helical structure and base pairs, and mix them together.

The DNA clam acts as a container and only opens when it finds its target. To keep its payload unscathed, made out specific molecules with encoded instructions for certain cell surface receptors with which it interacts, the clam is fitted with two locks. Each lock is made out of a DNA strand called an aptamer, specifically designed to recognize a certain molecule. Only when it nears the target, will the aptamer unzip, swinging the claim open, and delivering the payload in the process.

The scientists involved in research were Shawn Douglas, Ph.D., a Wyss Technology Development (Harvard University) Fellow, and Ido Bachelet, Ph.D., a former Wyss Postdoctoral Fellow who is now an Assistant Professor in the Faculty of Life Sciences and the Nano-Center at Bar-Ilan University in Israel.

To demo their creation, Douglas and Bachelet encoded antibody fragments with self-termination instructions for two types of cancer cells – leukemia and lymphoma. Since the two cancer cells communicate differently, they require specific instructions of their own, so the researchers were sure to have the messages written in different antibody combinations.

The nanorobot for leukemia had its locks open in response to molecules expressed on the cancer cells surface, and was loaded with a single molecules which kills cells by disrupting their growth cycles. Millions of such bots were released into a mixture of both healthy and cancerous human blood cells. Only three days afterwards, half of all the cancer cells were destroyed, while absolutely no healthy cells were affected at all. The researchers claim  had they increased the number of payloads into the system, then every leukemia cell would’ve been cleansed.

What’s important to note about this particular system, whose design was heavily influenced by our own natural immune system, is that the active molecules designed to attack a specific cell can be harbored into containers featuring two types of locks. Just like the body’s immune system, the DNA origami nanobots will thus be able to hone in on specific cells in distress, bind to them, and transmit comprehensible signals to them to self-destruct. “It would require that two different signals have to be present to open it, increasing its specificity,” says Douglas.

“This work represents a major breakthrough in the field of nanobiotechnology as it demonstrates the ability to leverage recent advances in the field of DNA origami pioneered by researchers around the world, including the Wyss Institute’s own William Shih, to meet a real-world challenge, namely killing cancer cells with high specificity,” said Wyss Institute Founding Director, Donald Ingber, M.D., Ph.D. “This focus on 9translating technologies from the laboratory into transformative products and therapies is what the Wyss Institute is all about.”

By all standards, this can only be considered a remarkable research, with potentially incredible consequences in medicine. Thoughts, please?

Nanotech could be applied in just about everything. With time scientists find out ways to apply it to various fields; building small, efficient electronics could be very useful in further use of nanotechnology.

A University of Arkansas physicist and her colleagues have examined the response of the nanostructures polarization to electric fields which is known as the dielectric susceptibilities of nanostructures and found very interesting and useful but seemingly contradictory properties that mean we could be able to design such things. They discovered that the dielectric response has three different aspects, unlike in the bulk level. These include the change of polarization with respect to the external field, called external susceptibility, and the change in polarization with respect to the internal field, called internal susceptibility. Both of these are characteristic of the shape of the material – that is, the susceptibility is dependent upon whether the object is a nanorod, a nanodot, or a nanofilm. The third aspect – called intrinsic susceptibility – is a characteristic of the material.

“It’s important to know what happens from many angles,” she said. “These characteristics may have useful applications, but right now we have more of a fundamental interest in them.”.

They found out that the highest external dielectric response occurred for electrodes that are around 90 percent efficient. This shows a point at which it is the most easily manipulated by an external electric field.