This April, Toulouse, France will be host to the world’s first international molecule-car race. The vehicles will be made up of only a few atoms and rely on tiny electrical pulses to power them through the 36-hour race. 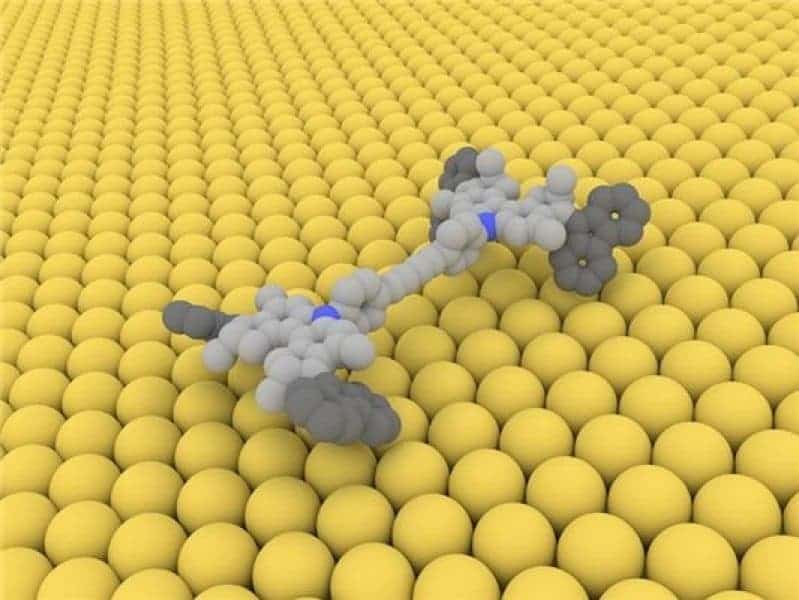 A model of a single-molecule car that can advance across a copper surface when electronically excited by a scanning tunneling microscope tip.
Image courtesy of Ben Feringa.

Races did wonders for the automotive industry. Vying for renown and that one second better lap time, engineers and drivers have pushed the limits of their cars farther and farther. Seeing the boon competition proved to be for the development of science and technology in pursuit of better performance, the French National Center for Scientific Research (Centre national de la recherche scientifique / CNRS) is taking racing to a whole new level — the molecular level.

From April 28th to the 29th, six international teams will compete in Toulouse, France, in a 36-hour long nanocar race. The vehicles will only be comprised of a few atoms and powered by light electrical impulses while they navigate a 100-nanometer racecourse made up of gold atoms.

The fast (relative to size) and sciency

The event is, first of all, an engineering and scientific challenge. The organizers hope to promote research into the creation, control, and observation of nanomachines through the competition. Such devices show great promise for future applications, where their small size and nimbleness would allow them to work individually or in groups for a huge range of industries — from building regular-sized machines or atom-by-atom recycling to medical applications, nanomachines could prove invaluable in the future. It’s such a hot topic in science that last year’s Nobel Prize for chemistry was awarded for discovering how to make more advanced parts for these machines.

But right now, nanomachines are kind of crude. Like really tiny Model T’s. To nudge researchers into improving this class of devices, the CNRS began the NanoCarsRace experiment back in 2013. It’s the brainchild of the center’s senior researcher Christian Joachim, who’s now director of the race, and Université Toulouse III – Paul Sabatier Professor of Chemistry Gwénaël Rapenne, both of whom have spent the last four years making sure everything is ready and equitable for the big event.

Some challenges they’ve faced were selecting the racecourse — which must accommodate all types of molecule-cars — and finding a way for participants to actually see their machines in action. Since witnessing a race so small unfurl could prove beyond the limitations of the human eye, the vehicles will compete under the four tips of a unique tunneling microscope housed at the CNRS’s Centre d’élaboration de matériaux et d’études structurales (CEMES) in Toulouse. It’s currently the only microscope in the world allowing four different experimenters to work on the same surface.

The teams have also been hard at work, facing several challenges. Beyond the difficulty of monitoring and putting together working devices only atoms in size, they also had to meet several design criteria such as limitations on molecular structures and form of propulsion. At the scale they’re working on, the distinction between physics and chemistry starts to blur. Atoms aren’t the things axles or rivets are made of — they’re the actual axles and rivets. So the researchers-turned-race-enthusiasts will likely be treading on novel ground for both of these fields of science, advancing our knowledge of the very-very-small.

Out of the initial nine teams which applied for the race before the deadline in May 2016, six were selected for the race. Four of them will go under the microscope on April 28th. The race is about scientific pursuit, but it’s also an undeniably cool event — so CNRS will be broadcasting it live on the YouTube Nanocar Race channel.

[panel style=”panel-info” title=”The rules of the race” footer=””]The race course will consist of a 20 nm stretch followed by one 45° turn, a 30 nm stretch followed by one 45° turn, and a final 20 nm dash — for a total of 100 nm.
Maximum duration of 36h.
The teams are allowed one change of their race cars in case of accidents.
Pushing another racecar a la Mario Kart is forbidden.
Each team is allotted one sector of the gold course.
A maximum of 6 hours are allowed before the race so each team can clean its portion of the course.
No tip changes will be allowed during the race.[/panel]

I’ve been running ZME Science for more than 2 years now, and the support you’ve shown has been increasingly amazing! However, much to my shame, I’ve rarely thanked you like you deserve it. I rarely have time to write as much as I want, I make grammar mistakes (non English speaker, btw), and I often reply to emails after a day or two. Still, I love you guys, and I try to give back as much as I can.

We’re gonna start doing a lot of giveaways and posters and … stuff (don’t wanna give you more details just yet), and this is the start. The day before yesterday I wrote about a great book I read, called ‘No small matter: Science on the nanoscale‘, and the publishers have been kind enough to offer 2 books for a giveaway. So, here’s how it goes.

All you have to do is join the ZME Science page on facebook (here), which I just started minutes ago. Then I’ll randomly select two winners and send them the books. Simple as that. Also, you’ll get to take part in discussions with people who have the same interest and you, contribute to noble causes, stay tuned with more information and also tell me what you like (and, of course, dislike) about the site. Good luck mates, and see you on facebook !

Nanotechnology is perhaps the field with the most spectacular development over the past years, but it can be really hard to understand what’s going on at that scale, mostly because we can’t see it (doh!), but also because the laws that apply there are slightly different.

No small matter:  Science on the nanoscale is the work of George M. Whitesides, the man with the highest H index of all living chemists and Felice C. Frankel, winner of the Photographic Society of America’s 2009 Progress Medal, and it has to be said, it’s awesome. Before I get into talking more about the book, I want to say that this is not a paid review, and everything I write is my honest opinion.

The book is written mostly for those who are just getting into nanotechnology or have a basic grasp of what’s going on there, but everybody has something to take from it, regardless of their interests and current knowledge; it probably fits best with undergrads, though. But, if you wanted to know what happens at a molecular level when you play the violin, take a pregnancy test or lit a candle (and way more), this is what you need to read.

A small revolution is remaking the world. The only problem is, we can’t see it. This is the book’s catchphrase, but it’s a bit too simple if you ask me. The virtual voyage the authors have prepared for the readers is just breathtaking, filled with detailed pictures of seemingly invisible objects, such as nanotubes, viruses, etc., proving what photography and high power microscopes can do when working together.

Basically it provides an overview of where nanotechnology is now, looking at what it has been and what it will probably be, as well as the advantages and dangers that this microscopic (or submicroscopic) world brings. In layman’s terms, you can call it an introduction in the science of the little; and what an introduction it is! What really convinced me of the value of the book is that aside from it’s educational part (which is explained logically, in detail, but kept simple) was it’s interesting part. I often found myself reading one page after another and forgetting to look at the pictures, even though they were really great. This happened because the information is presented in a clear, explosive and informal manner, allowing readers to grasp the basic core of nanotechnology.

“The textbook is well-written and concise, allowing readers with little or no prior knowledge about nanotechnology and nanoscience to understand and appreciate the concepts easily.”
Tan Lay Theng
Republic Polytechnic, Singapore

Get it via Amazon