In a recent act that just baffles my mind, Tennesee, not one of the US brightest states, has passed a bill that makes it easier for virtually any creationist teacher to include religion in science class. They did this by including mythology in science classes to promote critical thinking. Now I wonder, do you think there’ll be discussions about the Egyptian gods, or about Norse mythology, or about Zeus ? 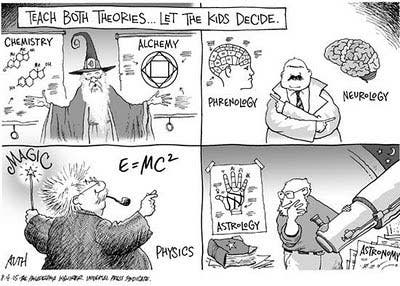 Let’s get one think straight; regardless of my beliefs, I do believe anyone is entitled to believe in whatever they want, as long as they don’t try to impose it directly or indirectly upon others. But religion is in religion class, science is in science class, doesn’t that make sense ? We’re talking about centuries of research, tens of thousands of peer reviewed papers against the Bible – I strongly believe that this bill is absurd.

The Tennessee Science Teachers Association had a firm and prompt response, declaring itself disgusted by the bill, and declaring it “unnecessary, anti-scientific, and very likely unconstitutional.”. As a matter of fact, creationism has lost every major U.S. federal court case for decades, and legislators are still trying to find a way to bring God into the biology class. This sort of meddling in the educational system is going out all over the US, and it will not bring anything good to the table, quite the opposite. Critical thinking is encouraged by trusting what is proven, and not what is believed; it’s dissapointing.

Locals, fishermen and tourists in the Israelian town of Kiryat Yam have been reporting repeated sightings of what they believe to be a mermaid, the mythological creature most often describe as half female, half fish.

Shlomo Cohen is one of the first who reported such a sighting. Here’s what he had to say:

“I was with friends when suddenly we saw a woman laying on the sand in a weird way. At first I thought she was just another sunbather, but when we approached she jumped into the water and disappeared. We were all in shock because we saw she had a tail.”

This has been going on for months, and in an attempt to draw even more tourists and attention, the tourism board offered a one million dollars reward, which they believe will motivate people to try their luck.

This once again raises the question of repeated sightings of legendary creatures (Loch Ness, ring a bell?). What is it that makes people see pretty much the same thing. Is it the power of suggestion combined with some imagination? It could be an optical illusion, or an animal that’s already known, and people who want to see something else actually see something else. Well, one thing’s for sure – you really shouldn’t be spending what’s left of your vacation trying to spot a mermaid.