Investments in renewables are starting to pay off in Morocco. A new report published by the Mediterranean Forum of Institute of Economic Sciences (Femise) claims that the renewable energy sector could create between 270,000 and 500,000 jobs in two decades.

Morocco has been one of the most ardent supporters of renewable energy. The country recently switched on the Noor solar plant. The complex alone carries a 160 megawatt capacity, with plans to expand it to 350 megawatts. After the entire plant is completed and switched on, it will provide electricity for 38% of the country. This initiative is expected to greatly help the country’s developing economy – not only by generating cheaper and more efficient energy but also by creating jobs. First released at the COP22 in Marrakech, Morocco, the Femise report highlights the opportunities brought by renewables:

“Despite the difficulties of some countries, the prospects for the Mediterranean region are not unfavorable, particularly for the ER sector. FEMISE researchers estimate that about 270,000 to 500,000 jobs could be created in Morocco by 2040, in the field of renewable energies.”

The report focuses on the challenges Mediterranean countries will face, especially in a changing climate. Water scarcity is expected to become more and more common, and this scarcity will exert great economic pressure. For Morocco, a country of 33 million people, these extra jobs could prove extremely helpful. Through the ambitious Desertec Industrial Initiative, Morocco hopes to establish itself as one of the main energy suppliers in the area. Being the only African country with a power cable link to Europe, Morocco expects to generate massive revenue from exporting energy across the Mediterranean sea.

With the recent announcement that solar energy is cheaper than fossil fuel energy, it’s becoming clearer each year that renewables offer great prospects for the economy. Hopefully, other countries will follow these trends and take advantage of these opportunities, instead of continuing to finance coal and other fossil fuels.

Morocco is poised to become a solar superpower, as they revealed plans for the largest concentrated solar power plant, powered by the Saharan sun. The plant will go online by 2020. 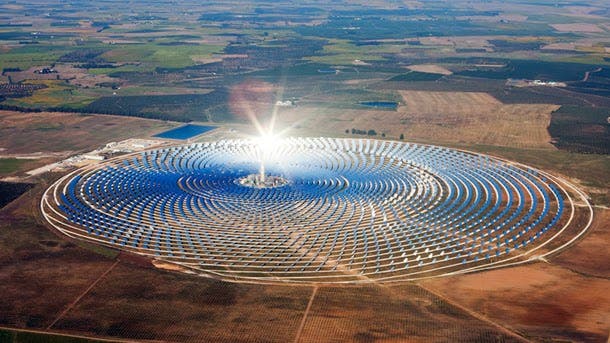 The good thing when you have vast portions of desert is that you can use them to generate solar power, without actually losing useful land. The Noor Solar Project, being built just outside the Saharan city of Ouarzazate, will power about half of the country’s energy, while also incorporating hydro and wind energy systems. But what makes it really special is that this array will be able to generate energy even after the Sun has gone down.

Noor will be a concentrated solar plant; it has a huge system of mirrors which will reflect sunlight and heat to a small area, allowing the Sun’s energy to heat up a solution that can be heated with water at a later time, without losing much energy. This is quite significant, because it deals with the problem of availability – photovoltaics only offer energy when the sun is shining. This particular solution is a synthetic thermal oil blend that will be heated to 393 degrees Celsius by the concentrated sunlight. After it is properly heated, it will move on to a heat tank containing molten sands that can store it for three hours with minimal energy loss – and small losses afterwards.

It will cover 2500 hectares (6178 acres) with 500,000 crescent-shaped solar mirrors located in 800 rows. Each mirror will be 12 meters high set on different tiers to maximize the solar input. They will move automatically after the Sun to reflect every last ray of sunlight

Ironically, this laudable project emerged from a lack of resources. Because unlike other African countries, Morocco doesn’t have significant oil reserves, they were forced to find other alternatives – and renewable energy was the solution.

“We are not an oil producer. We import 94 percent of our energy as fossil fuels from abroad and that has big consequences for our state budget,” Minister Delegate in Charge of Environment – Minister of Energy, Mining, Water and Environment of Morocco – Hakima el-Haite told Arthur Nelson over at The Guardian. “We also used to subsidise fossil fuels which have a heavy cost, so when we heard about the potential of solar energy, we thought; why not?”

If only other countries could learn from this… It’s about time all that desert land was put to good use.