Northeastern Canada has been settled again and again by distinct cultural groups, archaeological evidence suggests. A new paper reports that at least two of these groups were completely unrelated, adding further support to the theory that these people had distinct population histories. 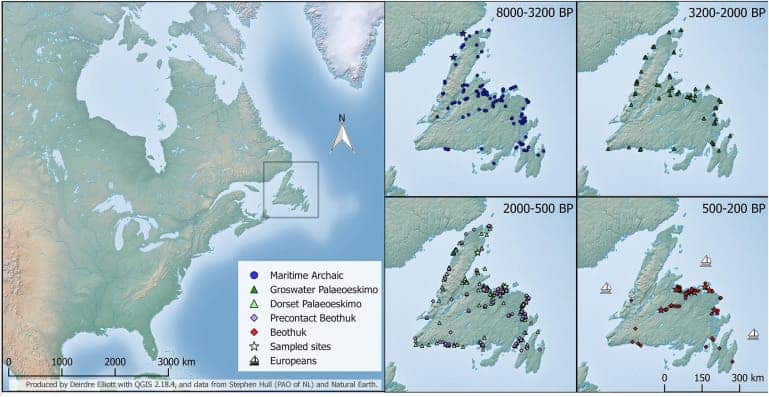 People have been living in Newfoundland, on Canada’s northeastern edge, ever since the Last Glacial Maximum subsided and ice caps retreated from the region roughly 10.000 years ago. Archaeological work has revealed that the area has seen quite a lot of newcomers in the meantime. Distinct cultural groups inhabiting the region at least three different times, with a possible hiatus between 2,000 and 3,000 years ago.

Two of the groups that reached Newfoundland are known as the Maritime Archaic and Beothuk, and according to a team of researchers led by Ana Duggan of McMaster University, these two groups were completely unrelated.

Archaeological findings couldn’t decisively establish the relationship between the Maritime Archaic and the Beothuk. So the team requested permission from current-day indigenous communities to retrieve DNA samples from 74 ancient remains strewn about the island of Newfoundland. After receiving the green-light, the team collected genetic material from tiny amounts of bone or teeth, as available.

The sample set included a Maritime Archaic subadult found in the L’Anse Amour burial mound, the oldest known burial mound in North America and one of the first manifestations of the Maritime Archaic tradition. The individual died more than 7,700 years ago. Most of the Beothuk samples came from the area around Notre Dame Bay, where the group retreated as a response to European expansion in the region, and the source-individuals were usually under 300 years old.

Analysis of mitochondrial DNA in the samples provided evidence that the two groups were unrelated. The two groups didn’t share a common maternal ancestor in the recent past, but rather one that coalesces sometime in the more distant past — meaning they split off a long time ago, and had developed into unrelated groups by the time they came to the island.

“Our paper suggests, based purely on mitochondrial DNA, that the Maritime Archaic were not the direct ancestors of the Beothuk and that the two groups did not share a very recent common ancestor,” Duggan says.

“This in turn implies that the island of Newfoundland was populated multiple times by distinct groups.”

Duggan says the research showcases the “extremely rich” dynamics of early people in the area. The fact that the Maritime Archaic people aren’t the direct ancestors of the Beothuk means there had to be multiple independent arrivals on the island, and that the arivees then settled the land for many generations.

“This record suggests abandonment, severe constriction, or local extinction followed by subsequent immigrations from single or multiple source populations, but the specific dynamics and the cultural and biological relationships, if any, among these successive peoples remain enigmatic,” the paper notes.

The paper “Genetic Discontinuity between the Maritime Archaic and Beothuk Populations in Newfoundland, Canada” has been published in the journal Current Biology

Cats’ long journey to today’s internet adoration started some 9,000 years ago, an extensive study which analyzed ancient feline DNA suggests. Wildcats were first domesticated in the Near East, then again in Egypt. According to the researchers who conducted the study, humans brought cats everywhere they went, from Egypt’s fertile plains to Viking longboats.

Cats: conquerors of the ancient world

Previously, researchers had sequenced the DNA of a couple of mummified cats from ancient Egypt, where the animals used to be treated like royalty and millions of such mummies abound. Eva-Maria Geigl, an evolutionary geneticist at the Institut Jacques Monod in Paris and colleagues really took it a step further, though.

They analyzed mitochondrial DNA from the remains of 352 ancient cats from more than 30 archaeological sites across Europe, the Middle East, and Africa. The oldest cat was dated from 15,000 years ago while the youngest used in the study lived during the eighteenth century C.E. Mitochondrial DNA is inherited exclusively from the mother’s side which makes it an ideal marker for phylogenetic and population analysis. These probably didn’t look and behave too differently from today’s African sand cat.

“We don’t know the history of ancient cats. We do not know their origin, we don’t know how their dispersal occurred,” Geigl said.

But we’re starting to learn

It’s not clear when cats became domesticated but the Egyptians might have had the first some 6,000 years ago. From Egypt, the felines rapidly expanded across the rest of Africa and Eurasia. Cats spread to Europe as early as 4,400 B.C.E. For instance, a mitochondrial line common in Egyptian cats from the fourth century B.C.E. was found in cat DNA collected from samples in Bulgaria, Turkey, and sub-Saharan Africa from around the same time. This was the second major wave of feline expansion. Cats even made their way along with sea-faring people, as evidenced by DNA found on a Viking site dating to between the eighth- and eleventh-century A.D. in northern Germany.

“There are so many interesting observations” in the study, says Pontus Skoglund, a population geneticist at Harvard Medical School in Boston, Massachusetts. “I didn’t even know there were Viking cats.”

Also according to the study, cats have changed very little in appearance since they were domesticated (though some claim house cats aren’t really tamed, just semi-domesticated). Physically, wildcats and house cats, are of about size and shape, though their behavior differs.

As another interesting finding, after the researchers sequenced nuclear DNA — valuable for tracing ancestry, not just population dispersion — they found the mutation responsible for the familiar tabby cats on the Taqpep gene didn’t appear until Medieval ages.

The findings appeared in the journal Nature Ecology & Evolution.

Five months ago, a three-parent baby girl was born in Mexico. Debate sparked in the wake of her birth, with one side arguing we’re “playing God” while the other points out that if a procedure gives women with a particular genetic disorder a shot at having healthy children, why not use it?

Limited information about the birth has published in anticipation of the American Society of Reproductive Medicine’s scientific congress in Salt Lake City, to be held next month, where the case will be debated at length.

What we know up to now is that the baby’s parents are Jordanian and the work was performed by a US team led by Dr John Zhang, of the New Hope Fertility Clinic in New York. The mother has Leigh syndrome, a genetic disorder passed on through mitochondrial DNA. It affects a developing fetus’ nervous system, usually leading to respiratory failure within the first two or three years of life. The mother herself is healthy but has already lost two children to the disease: a girl that lived to be six years old and an eight-month-old baby.

Naturally, the event sparked a heated debate. Critics believe that it’s the same as genetically editing humans or even “playing God”, while supporters say it gives couples a chance at having healthy babies related to them that they might otherwise never have.

So let’s take a look at how it all went down.

The technique used by the New Hope team (called pronuclear transfer) involved taking the nucleus from one of the mother’s eggs — her DNA — and implanting it into a donor egg whose nucleus has previously been removed but retained healthy mitochondrial DNA. Now, what’s really important to keep in mind here is that mitochondria have a special status in the human body — kind of like a friend who keeps crashing on your couch but can cook really well so you keep him around for the quality food. They retain their own DNA, completely separate from our own. They divide when they want, independent of when our cells do it. But they’re really, really good at turning what we eat into ATP, so we allow them their unequaled sovereignty inside our cells.

That’s why many scientists in the field insist the term “three-parent baby” is inaccurate. While mitochondrial DNA is inherited solely from the maternal line, the baby’s actual genetic makeup (sans the mitochondria) only comes from two people.

Still, because the technique isn’t approved in the US, the team invoked the pretty bad-ass argument that “there are no rules” in Mexico and just flew over for the procedure.

“To save lives is the ethical thing to do,” he told New Scientist.

Professor Bert Smeets, the director of the Maastricht University Genome Centre said that the egg replacement technique has already been proven safe by previous experiments and its introduction in clinics is only a matter of time.

“A US-based research group apparently escaped the more rigid regulatory framework in the US to perform this treatment in Mexico. That is a concern, especially as the framework not only safeguards the introduction into the clinic, but also the follow-up of the children born after this treatment,” he added.

“Hopefully, now the first child is born and the heat is off, it takes away the pressure to involve patients in unsecured treatments, when good alternatives are available.”

While specialists in the field welcomed news of Dr Zhang’s work, part of the public opinion and most regulators aren’t so thrilled about it. The British Parliament, for example, voted that creating “three-parent babies” is OK in principle but haven’t yet approved any specific technique to be used. The team also took some criticism for their choice to circumvent legal issues, even if the baby seems to be healthy.

“By performing the treatment in Mexico, the team were not subject to the same stringent regulation as some other countries would insist on. We have no way of knowing how skillful or prepared they were, and this may have been a risky thing to do. On the other hand, we have what appears to be a healthy baby. Because it was successful, fewer questions will be raised but it is important that we still ask them,” said Dr Dusko Ilic of King’s College London.

“It’s unfortunate to have people decide they’re just going to quite willingly engage in this kind of reproductive tourism — to go outside of a system that is in place to create the safest, most scientifically reproducible way forward,” said Lori P. Knowles, assistant professor, adjunct, at the University of Alberta School of Public Health told the CNN.

She also pointed out that four out of the five eggs the team fertilized weren’t viable.

“It shows you the technique itself is still quite fallible,” she said.

“Which is the whole reason you’re supposed to go slowly … and not jump right into creating babies.”

The team’s findings, under the title “First live birth using human oocytes reconstituted by spindle nuclear transfer for mitochondrial DNA mutation causing Leigh syndrome”, have been published in the journal Fertility and Sterility.