When looking into a mirror, you can see yourself or the mirror’s surroundings in the reflection. But what is a mirror’s true color? It’s an intriguing question for sure since answering it requires us to delve into some fascinating optical physics.

If you answered ‘silver’ or ‘no color’ you’re wrong. The real color of a mirror is white with a faint green tint.

The discussion itself is more nuanced, though. After all, a t-shirt can also be white with a green tint but that doesn’t mean you can use it in a makeup kit.

The many faces of reflected light

We perceive the contour and color of objects due to light bouncing off them that hits our retina. The brain then reconstructs information from the retina — in the form of electrical signals — into an image, allowing us to see.

Objects are initially hit by white light, which is basically colorless daylight. This contains all the wavelengths of the visible spectrum at equal intensity. Some of these wavelengths are absorbed, while others are reflected. So it is these reflected visible-spectrum wavelengths that we ultimately perceive as color.

When an object absorbs all visible lengths we perceive it as black while an object that reflects all visible wavelengths will appear white to our eyes. In practice, there is no object that absorbs or reflects 100% of incoming light — this is important when discerning the true color of a mirror.

Why isn’t a mirror plain white?

Not all reflections are the same. The reflection of light and other forms of electromagnetic radiation can be categorized into two distinct types of reflection. Specular reflection is light reflected from a smooth surface at a definite angle, whereas diffuse reflection is produced by rough surfaces that reflect light in all directions.

Mirrors employ specular reflection. When visible white light hits the surface of a mirror at an incident angle, it is reflected back into space at a reflected angle that is equal to the incident angle. The light that hits a mirror is not separated into its component colors because it is not being “bent” or refracted, so all wavelengths are being reflected at equal angles. The result is an image of the source of light. But because the order of light particles (photons) is reversed by the reflection process, the product is a mirror image.

However, mirrors aren’t perfectly white because the material they’re made from is imperfect itself. Modern mirrors are made by silvering, or spraying a thin layer of silver or aluminum onto the back of a sheet of glass. The silica glass substrate reflects a bit more green light than other wavelengths, giving the reflected mirror image a greenish hue.

This greenish tint is imperceptible but it is truly there. You can see it in action by placing two perfectly aligned mirrors facing each other so the reflected light constantly bounces off each other. This phenomenon is known as a “mirror tunnel” or “infinity mirror.” According to a study performed by physicists in 2004, “the color of objects becomes darker and greener the deeper we look into the mirror tunnel.” The physicists found that mirrors are biased at wavelengths between 495 and 570 nanometers, which corresponds to green.

So, in reality, mirrors are actually white with a tiny tint of green.

Another animal passes the mirror test — surprisingly, this time it’s a fish. The mirror test is a classic experiment used to determine animal self-awareness that only a handful of species have passed.

There might be more to the Bluestreak Cleaner Wrasse (Labroides dimidiatus) than meets the eye. Image credits Elias Levy.

A paper published by an international research team suggest that there might be more to the mind of the cleaner wrasse than we’d suspected. This tiny, unassuming tropical fish has just joined the few creatures that seem able to recognize their own reflection, the team writes.

The mirror self-recognition test (MSR) was first used during the 1970s by psychologist Gordon Gallup. Gallup presented the mirror to a group of adolescent chimpanzees, who — having never seen a mirror before — initially treated the images they saw as threats. After some time, however, they started shifting their behavior. In time, they learned that the mirror showed them a reflection of their own bodies, and so started to use them to groom or inspect themselves.

Gallup concluded that this change in behavior requires some level of self-awareness, a mental model of their own body as distinct from friends, foes, or other parts of the environment. The mirror test thus imposed itself as a key tool for researchers studying animal self-recognition.

The golden standard relies on the animal reacting in an unusual manner towards a novel feature of their body seen in the mirror. For example, if you see a spot of paint on your forehead in the mirror, you’d try to wipe it off. You do this because you recognize your face as being your own and because you can recognize the paint as not being ‘you’.

Since the 1970s, a few other animal species, usually mammals or birds, have passed the test as well. These range from ants to elephants (you can see a full list here). Some of these results, however, are still debated: manta rays, for example, acted oddly in front of mirrors, suggesting there was some sort of awareness behind their actions, but nothing conclusive could yet be determined. Many animals we consider social and intelligent, such as dogs, cats, or octopuses, have routinely failed the mirror test. Even humans often struggle with it, with some cultures not passing until six years of age or older.

The team, with members from Japan, Germany, and Switzerland, settled on the cleaner wrasse (Labroides dimidiatus) for their experiment as it has good vision and for its ability to spot parasites on other fish — both of which make it ideally suited for MSR-type tests. The team placed 10 fish in individual tanks outfitted with a mirror.

Being highly territorial animals, the fish at first attacked the mirrors, perceiving their reflection as intruders. Their attitude soon changed, however: within a few days, the fish were actually dancing in front of the mirrors, the team notes. This easily qualifies as ‘unusual’ behavior for the species, which tends to be solitary.

Next, the researchers placed a spot of colored gel on eight of the fishes’ heads in a position where they’d only be visible in the mirror. Seven of the fish spent ‘significantly more’ time in positions where the gel was visible in their reflection, the team writes. Several of them went on to spend more time than before trying to scrape the area against objects in their environment, the researchers add.

While the results suggest that the wrasse could perceive the images in the mirror as their own reflection, and the gel tests seem to indicate that they can notice outside changes to their bodies, the paper has sparked its own bout of debate. Some critics have pointed out that its possible the wrasse viewed the blobs as parasites on the skins of other fish, and not as being on their bodies at all.

Should the findings be confirmed, however, it would be an exciting development. Wrasses have relatively simple nervous systems, and we tend to associate self-awareness with complex brains. Not only would it be exciting to see self-awareness develop on such restrained ‘hardware’, but also to understand what that difference means in terms of how the fish experience self-awareness.

The paper “Cleaner wrasse pass the mark test. What are the implications for consciousness and self-awareness testing in animals?” has been published in the preprint server bioRxiv.

In Lewis Caroll’s Through the Looking-Glass, and What Alice Found There (1871), the sequel to the classic Alice’s Adventures in Wonderland, Alice again enters a fantastical world, this time by climbing through a mirror into the world that she can see beyond it. Though far from Alice’s spectacular feat, scientists at the Sandia National Laboratories in Albuquerque, New Mexico demonstrated a new type of mirror that behaves like no other.

A mirror without metals 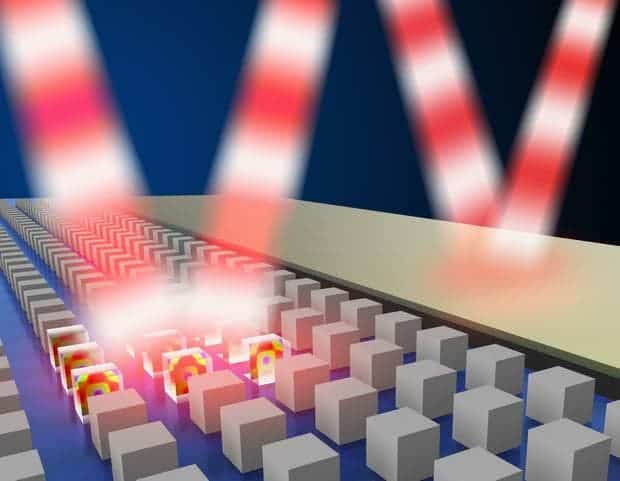 A conventional, metal coated mirror not only reverses the image, but also the light’s electric fields as well. This is because the mirror interacts with the electrical component of electromagnetic radiation. Of course, for those of us who use mirrors casually this physical alteration makes no difference, but it can become a real nuisance for physicists working on various optical and light absorbing/reflecting materials like solar cells, lasers and such. This becomes most intruding at the mirror’s surface, at the point of reflection where the opposite incoming and outgoing electrical fields produce a canceling effect. Yet, scientists in the US have made a breakthrough after they placed nanoscale antennas at or very near the surface of so-called “magnetic mirrors.”

“We have achieved a new milestone in magnetic mirror technology by experimentally demonstrating this remarkable behavior of light at infrared wavelengths. Our breakthrough comes from using a specially engineered, non-metallic surface studded with nanoscale resonators,” said Michael Sinclair, co-author on the Optica paper and a scientist at Sandia National Laboratories in Albuquerque, New Mexico, USA who co-led a research team with fellow author and Sandia scientist Igal Brener.

Unlike silver and other metals, however, there is no natural material that reflects light magnetically. Magnetic fields can reflect and even bottle-up charged particles like electrons and protons. But photons, which have no charge, pass through freely. To overcome this predicament, the researchers devised a matematerial – a material that can’t be found in nature, artificially created to suit certain needs – made up of nanoscale cube-shaped resonators, based on the element tellurium, each considerably smaller than the width of a human hair and even tinier than the wavelengths of infrared light, which is essential to achieve magnetic-mirror behavior at these incredibly short wavelengths.

“The size and shape of the resonators are critical,” explained Sinclair “as are their magnetic and electrical properties, all of which allow them to interact uniquely with light, scattering it across a specific range of wavelengths to produce a magnetic mirror effect.”

Typically, this sort of solution is practical only for long microwave frequencies, which limits the scope of applications to microwave antennas, mainly. The  two-dimensional array of non-metallic dielectric resonators, however, overcomes these limitations – all without loss of signal. To prove their design actually works like a magnetic mirror, the Sandia scientists used a technique called time-domain spectroscopy.

“Our results clearly indicated that there was no phase reversal of the light,” remarked Sheng Liu, Sandia postdoctoral associate and lead author on the Optica paper. “This was the ultimate demonstration that this patterned surface behaves like an optical magnetic mirror.”

Next, the researchers plan on demonstrating magnetic mirrors at even shorter wavelengths.  where extremely broad applications can be found.

“If efficient magnetic mirrors could be scaled to even shorter wavelengths, then they could enable smaller photodetectors, solar cells, and possibly lasers,” Liu concluded.