Whales don’t put their back into hearing — but they do put their skull. New research, along with the first-ever full-body CT scan of minke whale show how the sea-borne mammals can pick up low-frequency sounds, from the calls of other whales to the propellers of cargo ships. 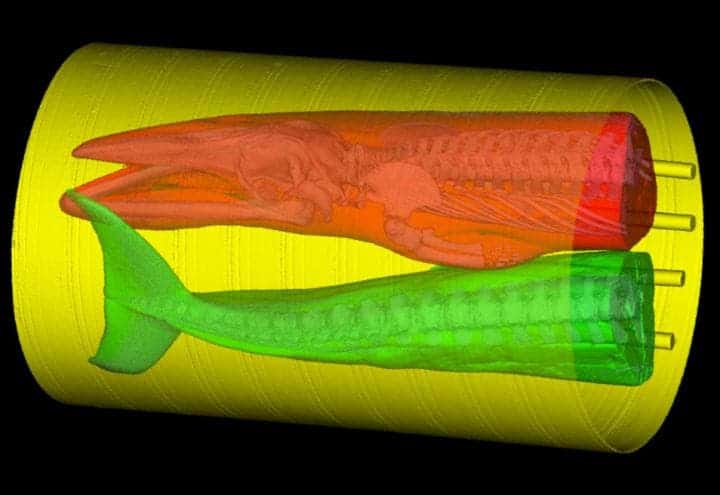 The minke whale specimen inside the industrial CT scanner. To reduce the time required to scan the entire whale, the team cut the specimen in half, scanned both pieces at the same time, and reconstructed the complete specimen afterward in the computer.
Image credits Ted Cranford / San Diego State University.

The gentle giants of the sea often bedazzle and impress with their songs, but… how can they hear each other underwater? New research suggests that it’s possible if you use your head. If you use your head as a huge acoustic antenna, that is.

Can you hear that?

Considering where whales like to hang out and their impressive girths, studying the marine mammals is notoriously difficult. However, one team of determined US researchers wouldn’t let that dissuade them. The duo has developed a new method of determining how baleen whales (parvorder Mysticeti) pick up low-frequency chatter between 10 to 200 Hertz.

“You can imagine that it is nearly impossible to give a hearing test to a whale, one of the largest animals in the world,” said lead researcher Ted W. Cranford, PhD, adjunct professor of research in the department of biology at San Diego State University.

“The techniques we have developed allow us to simulate the biomechanical processes of sound reception and to estimate the audiogram [hearing curve] of a whale by using the details of anatomic geometry.”

Using a computerized tomography (CT) scanner designed for industrial applications (it was originally used to spot structural defects in rockets), the researchers analyzed the internal structure of a minke whale calf (Balaenoptera acutorostrata) and a fin whale calf (B. physalus). Both animals were found stranded along the U.S. coast some years before the study and were preserved after they died during rescue operations.

CT scanners are a type of X-ray detectors that take a cross-sectional picture through objects or organisms. You’re likely quite familiar with them from hospitals or TV shows involving hospitals. The team produced 3D models showing of the calves’ skulls based these scans. Then, they used a method known as finite element modeling (FEM) to combine maps of tissue density from the CT scans with measurements of tissue elasticity. Finally, a supercomputer simulated these combined models’ response to sounds of different frequencies.

The team reports that whales’ skulls surprisingly act as antennae or a resonance chambers: the bones vibrate when impacted by sound, amplifying and transmitting the vibrations to the whales’ ears. The skulls were especially well-tuned to the low-frequency sounds that whales use to communicate. The authors also note that large shipping vessels also produce the same frequencies, a finding that should help industry and policymakers establish new regulation to limit our impact on these gentle giants.

In addition, the team’s models suggest that minke whales hear low-frequency sound best when it arrives from directly ahead of them. This suggests whales have directional hearing that provides cues about the location of sound sources, such as other whales or oncoming ships. Exactly if (and how) whales might boast directional hearing is still a puzzling question, given that low-frequency sounds tend to travel in waves that are longer than the whales themselves.

The findings were presented Monday, April 23rd at the American Association of Anatomists annual meeting during the 2018 Experimental Biology meeting in San Diego.