Researchers have developed a microphone so sensitive it’s capable of picking up individual particles of sound.

OK, we knew light has particles, and gravity has particles. Now even sound has particles? Well, not quite. A phonon is what’s called a quasiparticle — basically, an emergent phenomenon that occurs when a microscopically complicated system behaves as if it were a particle.

But although they’re not real particles (what’s real in the quantum world anyway?), phonons have a lot in common with photons, the carriers of light: they’re quantized. Being quantized is the backbone of all quantum particles and as strange as that may sound, it actually means something very simple: it means that they can only carry some types of energy.

Let’s say we have a minimum possible energy level — a particle can only have exact multiples of that ammount. If the minimum level is “1”, it can only have 1, 2, 3, 4… and so on — not 1.5, or any value in between. Think of it as the rungs on a ladder of energy, with nothing in between.

Since photons also have this characteristic to them, it means that a quantum level, it gets pretty weird.

“Sound has this granularity that we don’t normally experience,” said study leader Amir Safavi-Naeini, from Stanford. “Sound, at the quantum level, crackles.”

Although phonons have been described by Albert Einstein, researchers have only been able to measure phonon states in engineered structures — until now.

The problem with building a phonon microphone is the scale at which you have to build it.

“One phonon corresponds to an energy ten trillion trillion times smaller than the energy required to keep a lightbulb on for one second,” said graduate student Patricio Arrangoiz-Arriola, a co-first author of the study.

A regular microphone works thanks to an internal membrane that vibrates when hit by sound waves. This physical movement is converted into a measurable voltage. However, if you tried to make a quantum microphone this way, it wouldn’t work. According to Heisenberg’s uncertainty principle, a quantum object’s position can’t be precisely known without changing it. So if you tried to measure the number of phonons, the measurement itself would mask their energy levels. So the researchers decided to measure this latter property.

The quantum microphone consists of a series of supercooled nanomechanical resonators, so small that they are visible only through an electron microscope. The resonators are connected to a superconducting circuit which contains electron pairs that move around without resistance. The circuit forms a qubit — a system that can exist in two states at once and has a natural frequency, which can be read electronically.

“The resonators are formed from periodic structures that act like mirrors for sound. By introducing a defect into these artificial lattices, we can trap the phonons in the middle of the structures,” Arrangoiz-Arriola said.

While the system is extremely complex and difficult to handle, the results are also worth it. Mastering the ability to precisely generate and detect phonons could help pave the way for new kinds of quantum devices that are able to store and retrieve information encoded as particles of sound or that can convert seamlessly between optical and mechanical signals.

“Right now, people are using photons to encode these states. We want to use phonons, which brings with it a lot of advantages.

“Our device is an important step toward making a ‘mechanical quantum mechanical’ computer.”

The study was published in the journal Nature.

Michigan State University engineers have put together a flexible, paper-thin transducer — a device which can turn physical motion into electrical energy and vice-versa. The material could be used to create a whole new range of electronics powered from motion, as well as ultra-thin microphones and loudspeakers. 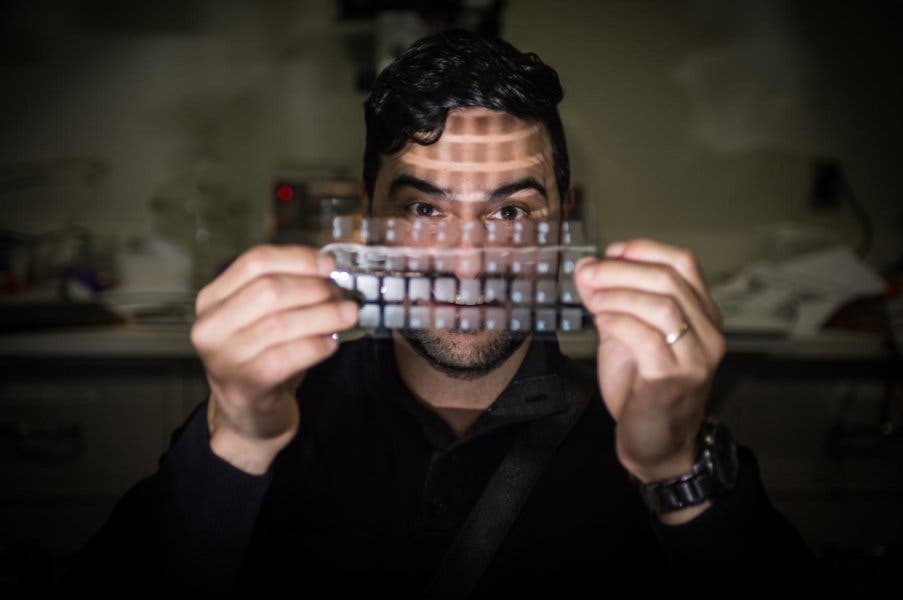 Harry Potter may have had animated newspapers but you know what Hogwarts never had? Newspaper boomboxes. So I guess it’s score one for the muggles, since we’re about to get just that. Along with newspaper microphones, or anything else that’s really thin and works either as a sound recording or replay device. Our imagination’s the limit.

The device’s fabrication process starts with a silicone wafer with several thin layers or sheets of environmentally friendly substances including silver, polyimide, and polypropylene ferroelectret added over it. Ions (which are charged particles) are added onto each individual layer so that they produce an electrical current when compressed.

Known as a ferroelectret nanogenerator (abbreviated FENG), it was first showcased in late 2016 as a sheet which could turn users’ touch into energy to power a keyboard, LED lights and an LCD touch-screen.

Since then, the FENG got some new tricks. The team discovered that in addition to its touch-to-energy transformation ability, the material can be used as a microphone — by turning the mechanical energy of sound into electrical energy — and as a loudspeaker — by doing the reverse.

“Every technology starts with a breakthrough and this is a breakthrough for this particular technology,” said Nelson Sepulveda, MSU associate professor of electrical and computer engineering and primary investigator of the federally funded project.

As a proof-of-concept for sound recording, the team developed a FENG security patch which uses voice recognition software to unlock a computer. Tests revealed that the patch can pick up on voices with a high fidelity, being sensitive enough to capture several frequency channels in the human voice.

To test how well the material would function as a loudspeaker, some FENG fabric was embedded into the faculty’s own Spartan flag. It was supplied with a signal from an iPad through an amplifier. The team reports that it reproduced the sound flawlessly, the flag itself becoming a loudspeaker. One day, you could be carrying speakers around everywhere, comfortably folded in your pocket until you need them. Or you could have a poster of FENG at home, ready to hook up to your PC, taking up virtually no desk space.

“So we could use it in the future by taking traditional speakers, which are big, bulky and use a lot of power, and replacing them with this very flexible, thin, small device.”

“Or imagine a newspaper,” Sepulveda added, “where the sheets are microphones and loudspeakers. You could essentially have a voice-activated newspaper that talks back to you.”

Other applications could include a noise-canceling sheeting that also produces some energy in the bargain, or voice-operated wearable health-monitoring devices. The team says they’re also interested in developing in the “speaking and listening aspects” of the technology.

The full paper “Nanogenerator-based dual-functional and self-powered thin patch loudspeaker or microphone for flexible electronics” has been published in the journal Nature Communications.