Imagine a swarm of insect-sized robots capable of recording criminals for the authorities undetected or searching for survivors caught in the ruins of unstable buildings. Researchers worldwide have been quietly working toward this but have been unable to power these miniature machines — until now.

Engineers from MIT have developed powerful micro-drones that can zip around with bug-like agility, which could eventually perform these tasks. Their paper in the journal Advanced Materials describes a new form of synthetic muscle (known as an actuator) that converts energy sources into motion to power these devices and enable them to move around. Their new fabrication technique produces artificial muscles, which dramatically extend the lifespan of the microbot while increasing its performance and the amount it can carry.

In an interview with Tech Xplore, Dr. Kevin Chen, senior author of the paper, explained that they have big plans for this type of robot:

“Our group has a long-term vision of creating a swarm of insect-like robots that can perform complex tasks such as assisted pollination and collective search-and-rescue. Since three years ago, we have been working on developing aerial robots that are driven by muscle-like soft actuators.”

Your run-of-the-mill drone uses rigid actuators to fly as these can supply more voltage or power to make them move, but robots on this miniature scale couldn’t carry such a heavy power supply. So-called ‘soft’ actuators are a far better solution as they’re far lighter than their rigid counterparts.

In their previous research, the team engineered microbots that could perform acrobatic movements mid-air and quickly recover after colliding with objects. But despite these promising results, the soft actuators underpinning these systems required more electricity than could be supplied, meaning an external power supply had to be used to propel the devices.

“To fly without wires, the soft actuator needs to operate at a lower voltage,” Chen explained. “Therefore, the main goal of our recent study was to reduce the operating voltage.”

In this case, the device would need a soft actuator with a large surface area to produce enough power. However, it would also need to be lightweight so a micromachine could lift it.

To achieve this, the group elected for soft dielectric elastomer actuators (DEAs) made from layers of a flexible, rubber-like solid known as an elastomer whose polymer chains are held together by relatively weak bonds – permitting it to stretch under stress.

The DEAs used in the study consists of a long piece of elastomer that is only 10 micrometers thick (roughly the same diameter as a red blood cell) sandwiched between a pair of electrodes. These, in turn, are wound into a 20-layered ‘tootsie roll’ to expand the surface area and create a ‘power-dense’ muscle that deforms when a current is applied, similar to how human and animal muscles contract. In this case, the contraction causes the microbot’s wings to flap rapidly.

A microbot that acts and senses like an insect

The result is an artificial muscle that forms the compact body of a robust microrobot that can carry nearly three times its weight (despite weighing less than one-quarter of a penny). Most notably, it can operate with 75% lower voltage than other versions while carrying 80% more payload.

They also demonstrated a 20-second hovering flight, which Chen says is the longest recorded by a sub-gram robot with the actuator still working smoothly after 2 million cycles – far outpacing the lifespan of other models.

“This small actuator oscillates 400 times every second, and its motion drives a pair of flapping wings, which generate lift force and allow the robot to fly,” Chen said. “Compared to other small flying robots, our soft robot has the unique advantage of being robust and agile. It can collide with obstacles during flight and recover and it can make a 360 degree turn within 0.16 seconds.”

The DEA-based design introduced by the team could soon pave the way for microbots that work using untethered batteries. For example, it could inspire the creation of functional robots that blend into our environment and everyday lives, including those that mimic dragonflies or hummingbirds.

“We further demonstrated open-loop takeoff, passively stable ascending flight, and closed-loop hovering flights in these robots. Not only are they resilient against collisions with nearby obstacles, they can also sense these impact events. This work shows soft robots can be agile, robust, and controllable, which are important for developing next generation of soft robots for diverse applications such as environmental exploration and manipulation.”

And while they’re thrilled about producing workable flying microbots, they hope to reduce the DEA thickness to only 1 micrometer, which would open the door to many more applications for these insect-sized robots.

One of the tiniest robots to come out of Harvard’s laboratories shows that being small can be a huge advantage. 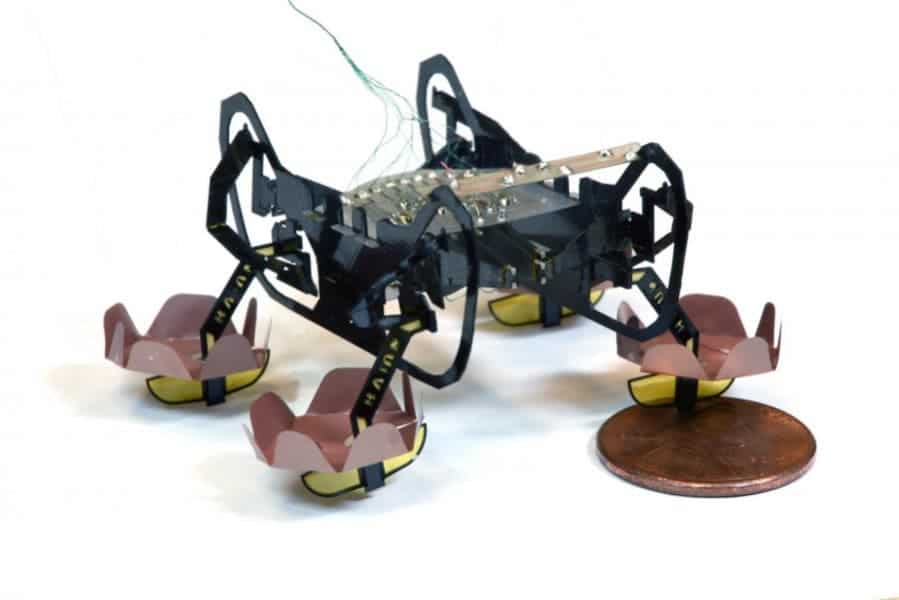 Fitfully christened the ‘Harvard Ambulatory Microrobot’ (HAMR), the device does exactly what it says on the tin — it’s from Harvard, it moves, it’s tiny, and it’s a robot. But don’t let its modest appearance deceive you, for HAMR will do a lot of things its beefier brethren can’t.

The robot can walk on land, walk underwater, or walk on water without any time constraints. The team behind HAMR hope their tiny creation will open up new possibilities for bots, paving their way towards new environments.

HAMR really is tiny. It weighs an intimidating 1.65 grams (0.05 oz) — about as much as a paper clip — and can carry an additional 1.44 grams of payload while retaining its ability to float. The bot draws on a new generation of multifunctional foot pads to carry it across watery surfaces. These pads use surface tension induced buoyancy to keep the bot afloat — just like those tiny bugs that zip across water surfaces.

But just floating isn’t very useful — it’s much more useful to float towards something. The team has the bot covered in that regard. They equipped HAMR with four pairs of asymmetric flaps and programmed it with custom-designed swimming gaits to help it paddle the water surface and move around. The robot’s swimming patterns resemble those of a diving beetle, the team adds, allowing it to both advance and turn. 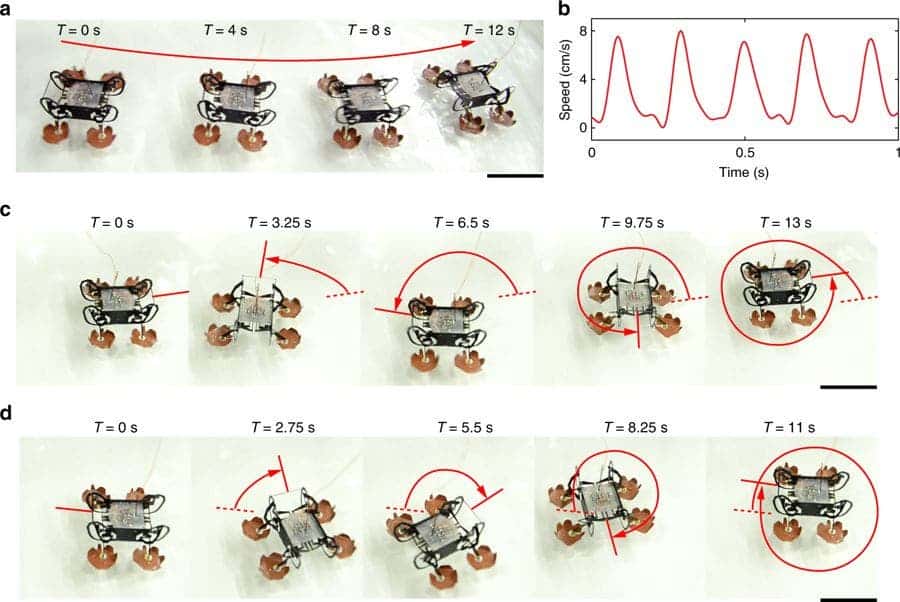 Robot swimming and turning on the water surface. B) graph tracks its speed going forward over time, while C) and D) track the speed of its turning motions.
Image credits Y. Chen et al., 2018, Nature Comm.

Moving on the surface requires little energy and saves HAMR the hassle of avoiding obstacles. But should the need arise, it can also apply a voltage to its foot-pads. The process, known as electrowetting, reduces the contact angle between a material and the water surface under an applied voltage, the team writes. This change makes it easier for an object to break the water surface and sink.

A coat of Parylene keeps it from shorting under water.

“This robot nicely illustrates some of the challenges and opportunities with small-scale robots,” said senior author Robert Wood.

“Shrinking brings opportunities for increased mobility — such as walking on the surface of water — but also challenges since the forces that we take for granted at larger scales can start to dominate at the size of an insect.”

Once below, HAMR moves around using the same gait it employs on dry land. The bot is just as mobile underwater, but emerging back to try land does pose a few problems. The surface tension of a body of water is relatively immense since the bot is so tiny. When trying to emerge, surface tension applies a force roughly twice the robot’s weight down on HAMR. The team also notes that this process dramatically increases friction on the robot’s hind legs, destabilizing and potentially damaging it.

To overcome this issue, they made HAMR’s diminutive transmission more sturdy and installed soft pads on its front legs to increase payload capacity and redistribute friction on inclined planes. All these changes mean that HAMR can currently break surface tension and emerge from a body of water — provided it can find a ‘modest incline’ to climb out on.

“HAMR’s size is key to its performance,” said co-author Neel Doshi. “If it were much bigger, it would be challenging to support the robot with surface tension and if it were much smaller, the robot might not be able to generate enough force to break it.”

“This research demonstrates that microrobotics can leverage small-scale physics — in this case surface tension — to perform functions and capabilities that are challenging for larger robots,” adds first author Kevin Chen.

While HAMR doesn’t have any real-life applications so far, it’s a great platform to showcase the advantages (and shortcomings) of tiny robots. The team will keep refining their design. Next on their list is improving HARM’s ability to move around and making it return to land even without a ramp — the team is currently coquetting with gecko-inspired pads or some sort of jumping mechanism for the task, although they may settle on a different solution.

But perhaps most importantly, HAMR is cute as a button. Judging from this video Harvard created back in January, if they ever make a pet version of the tiny little robot, I’m getting one. The video showcases an older version of HAMR, which lacks the padded feet and waterproof coating.

The paper “Controllable water surface to underwater transition through electrowetting in a hybrid terrestrial-aquatic microrobot” has been published in the journal Nature Communication.