Mathematics doesn’t usually make headlines and yet, to say that the announcement from Sir Michael Atiyah caused a stir would be an understatement. The renowned mathematician claimed to have solved the long-standing Riemann Hypothesis, with potentially massive implications for worldwide digital security. Well-aware of the skepticism that would surround his announcement, Atiyah pushed on, announcing that he would present his “simple” proof at the Heidelberg Laureate Forum. 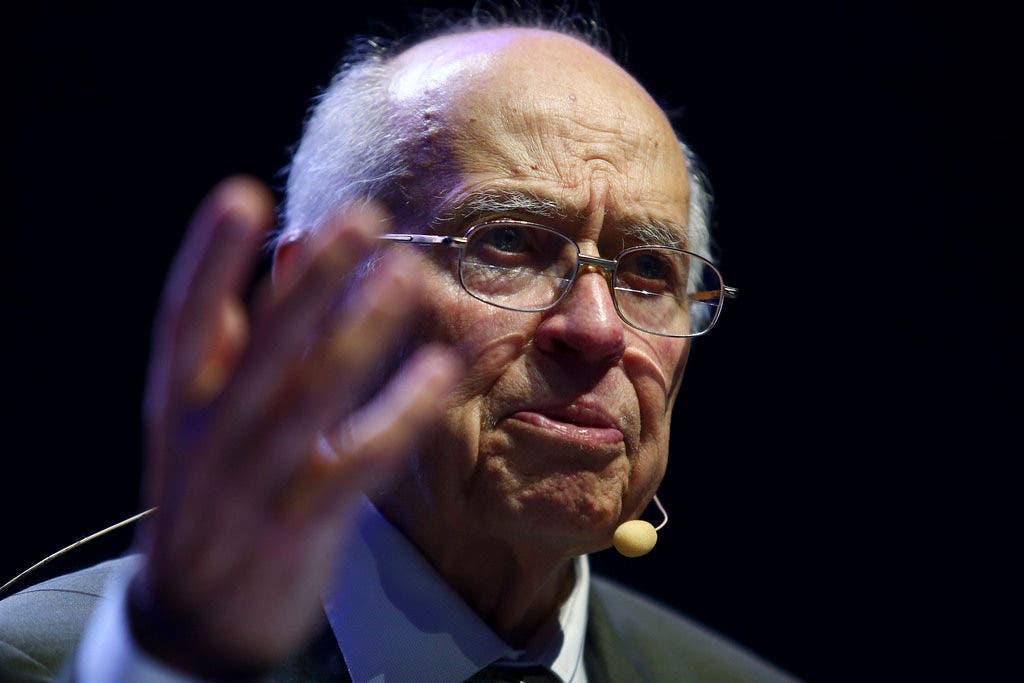 Michael Atiyah, speaking at the International Congress of Mathematicians in 2018.

This is a continuation of a previously published article, which you can read here. For a brief overview of the Riemann Hypothesis itself, check the bottom of the article.

There’s something inherently romantic about solving a math problem — a sort of man-against-nature kind of endeavor — and although most people seemed skeptical of Atiyah’s announcement, I’d dare say that deep down, we all hoped he would come out a victor. In Heidelberg, Germany, the stage was set.

It’s not just that the hypothesis is inherently challenging to solve — it stood unsolved for almost 160 years — but the fact that Atiyah himself claimed this solution struck people as unusual. It’s not that anyone doubted his ability: having won the two most prestigious awards in math (the Fields Medal and the Abel Prize), he’s one of the most renowned and respected mathematicians alive today. But most people in the field make their big findings in the earlier stretches of their career, before they’re 40. At a ripe 90, Atiyah stands in stark contrast, and he says recent papers tend to get rejected because people doubt his ability due to his old age.

So few people (if any) knew what to expect coming into the presentation, which made things all the more exciting, of course. The presentation itself was nothing if not entertaining — which is something you wouldn’t really expect, although Atiyah prides himself on his ability to explain everything at a fairly simple level.

“Solve the Riemann and you become famous. If you’re famous already, you become infamous,” he quipped in an almost hasty David Attenborough tone.

[panel style=”panel-info” title=”Hypothesis vs Theory” footer=””]Riemann’s hypothesis has been repeatedly observed to be accurate over a wide range of domains. However, it was never fully demonstrated — which is why it’s a hypothesis, rather than a theory. In science, ‘theory’ has a very different (and strong) meaning, as opposed to how ‘theory’ is used in our day to day lives.[/panel]

But as the minutes went by, it became clear that Atiyah wasn’t squeezing any long, compelling proof into the 45-minute presentation. At points, it felt like an introduction to mathematical history, with numerous sidetracks and backtracks. But there was also a sense of anticipation — a sense that the simple slides he was presenting were more like puzzle pieces, inconspicuously falling into place to reveal a much bigger picture.

Atiyah wasn’t even looking to solve the Riemann hypothesis — he was working in physics, trying to derive something called the fine structure constant. But sometimes, he says, when you solve problem A, you might end up solving problem B and not even know about it — this transposition of ideas makes math so great. The Riemann hypothesis was merely a problem B, something that came along almost accidentally.

Then, there it was — the “punchline”, as Atiyah himself referred to it: a relatively simple slide, with only a few lines. This is where all the “meat” of the demonstration is. 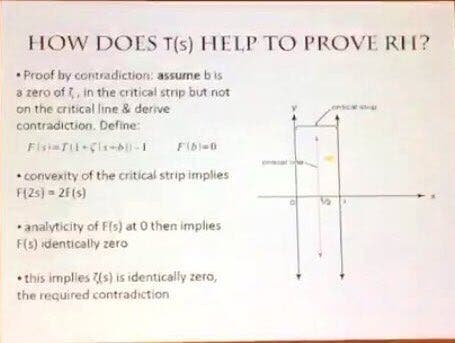 If you’re not a mathematician (or if you are, but work in a different field), that probably looks like gibberish — and that’s fine, we won’t go into specifics; in all honesty, we couldn’t, even if we wanted to. But here’s the thing: extraordinary claims require extraordinary proof, and extraordinary proof rarely fits into one slide.

There was a sense of bewilderment after the presentation finished. When it was time for the questions, no one stood up and no one raised their hand, and for the next 30 seconds, you could cut the atmosphere with a knife. Timidly, one young man raised his hand — and he spoke the words that were on everyone’s mind: has the Riemann hypothesis been proven?

The comments which could be heard in some sections of the room were unflattering at best, and don’t belong in any scientific environment. But the concerns raised are, in a general sense, valid. Atiyah made several assumptions which permitted his leap. For instance, he worked with something called infinite iterations — something which is extremely dangerous; it’s the mathematical equivalent of treading on thin ice. Atiyah says he wouldn’t trust himself enough to take this step, but he builds on the work of John von Neumann, widely regarded as the foremost mathematician of his time (first part of the 20th century). Empowered by von Neumann’s work, Atiyah felt confident enough to claim the solution to this problem.

There was also an issue regarding the scope of his demonstration — had he really “solved” the problem, or has he merely tackled a particular aspect about its application? Atiyah’s answer to the question from the audience was, like the entire speech, charming, but left a bit more to be desired:

“This is just the first step on a long road. But yes, the first step, the solution to the problem, I proved that,” he stated, right after he said that he thinks he deserves the Millennium Prize for solving the problem.

Naturally, the problem of verification popped up afterward. Mathematicians worldwide would like to poke and prod around this proof, and they will have the chance to do so. This is where things took an unpleasant turn.

Atiyah wants to be believed — of course he does. A mathematician of his caliber should not settle for anything else and communication is, after all, the end game of any study. But it can be quite hard to get your message across when you’re 90 years old.

“I do care who believes it. Mathematics involves two steps: creation and dissemination. If you don’t disseminate your ideas, you don’t get anywhere,” he said. But when you’re 90, it’s extremely difficult to publish, he adds.

“When you’re my age, people don’t really want to publish my papers. You’re too old, they say.”

As a knee-jerk reaction, you’d want to say this can’t possibly be true. Surely, his work is subjected to the same scrutiny as all others, regardless of age. But the inherent bias is hard to deny, even in a room full of Atiyah’s peers. In the aftermath of his presentation, age seemed to be the most common topic of discussion — perhaps even more so than the math.

Sexism is a big problem in science, Atiyah rightly points out, but so is ageism, he adds. At the end of the day, one can only feel that his paper should be judged by its own value — regardless of whether it comes from an Abel Prize winner or a 90-year-old man — as a paper coming from a mathematician, simple as that.

At this point, it’s not clear whether his papers were reviewed “double-blind” or if the reviewers were aware of who submitted the paper. We don’t know if age really was the decisive factor in the initial rejection of the paper, or if it’s simply invalid — but age shouldn’t be a decisive criterion.

Now, at the very least, his paper (see here) will receive attention and scrutiny. The few people who can truly attest to its worth will presumably review it thoroughly, and while it may take a while (math proofs are often difficult to confirm or invalidate), when the dust will settle, we’ll find out whether we finally have a solution for the Riemann Hypothesis or not. Regardless of that outcome, Atiyah made us all think about the largely overlooked problem of ageism in science.

His presentation was charming and entertaining — which in this context, almost feels like a sin. The stage was brilliantly set, but the final outcome is, as of yet, undecided, and the lead actor’s performance not entirely convincing. Has he really identified a solution? We’ll likely know soon enough. But he’s certainly highlighted a new problem:

While looking at prime numbers, Berhard Reimann, one of the most prolific German mathematicians, realized something interesting: the distribution of these prime numbers isn’t random at all, it’s very similar to a function, called the Riemann Zeta Function, described below.

This is where it starts to get tricky. The variable s can take any value, and Riemann’s work gives us an explicit formula for the number of primes in a given interval. This is done in terms of the so-called ‘zeros’ of the function — the values of s under which the function becomes 0. You can think of this function as a way to predict the distribution of prime numbers.

Riemann observed this in action, but he was never really able to prove it. This is why this is still a hypothesis, and not a theory (which, in science and math, has a much stricter meaning than in regular talk). It still remains to be seen whether this will still be the case.