New research is paving the way towards new, more efficient sunscreen — one that won’t damage corals, to boot.

Methylene blue, a century-old medicine that my grandma used to give me whenever I had a sore throat, could prove to be quite an effective sunscreen. The substance is an effective broad-spectrum insulator against ultraviolet (UV) radiation, absorbing both UVA and UVB (the first produces sunburn, the second contributes to skin cancer), repairs UV-induced DNA damage in the skin, and is also much safer for corals than current options. According to a new study, methylene blue could become a common alternative sunscreen ingredient.

“Our work suggests that methylene blue is an effective UVB blocker with a number of highly desired characteristics as a promising ingredient to be included in sunscreens,” says the study’s senior author Dr. Kan Cao, Founder of Mblue Labs, Bluelene Skincare, and a Professor at the University of Maryland Department of Cell Biology and Molecular Genetics.

“It shows a broad spectrum absorption of both UVA and UVB rays, promotes DNA damage repair, combats reactive oxygen species (ROS) induced by UVA, and most importantly, poses no harm to coral reefs.”

Most commercially available brands of sunscreen sold today (around 80%) use oxybenzone to block UV rays. However, we know that oxybenzone is quite damaging to coral reefs, and several local and national governments have already banned its use and that of its derivatives in order to protect marine ecosystems. Which is all well and good, but it also means that we need a replacement.

The team looked at the interaction between methylene blue and UV radiation under several angles in primary human keratinocytes and skin fibroblasts from young and old donors. The results were compared to similar data for oxybenzone. They report that methylene blue not only absorbs UVA & UVB, but it also helps repair DNA damage induced by UV radiation.

When exposing Xenia umbellate, a soft coral species, to the same amounts of methylene blue or oxybenzone in isolated tanks, they found another important tidbit of information. The corals exposed to oxybenzone experienced severe bleaching and death in under a week. The ones exposed to methylene blue did not show any negative effects even at relatively high concentrations of the compound.

Compared with other skincare antioxidants such as vitamin A (retinol) and vitamin C, methylene blue showed that it is highly effective at protecting our cells. The best results, however, were seen when using a combination of vitamin C and methylene blue.

“We are extremely excited to see that skin fibroblasts, derived from both young and old individuals, have improved so much in terms of proliferation and cellular stress in a methylene blue-containing cell culture medium.” Dr. Cao reports.

“Most surprisingly, we found that the combination of methylene blue and Vitamin C could deliver amazing anti-aging effects, particularly in skin cells from older donors, suggesting a strong synergistic reaction between these two beneficial antioxidants.”

Overall, the team writes in their abstract, methylene blue has the potential of becoming a reef-friendly active ingredient in sunscreens, which would also likely improve the efficiency of this product compared to current options. In particular, they explain, today’s ratings (Sun Protection Factor — SPF) only account for UVB exposure, so today’s sunscreens leave users exposed to the oxidative stress and photoaging induced by UVA rays. Methylene blue also promotes DNA repair in the skin, and can deliver anti-aging effects, especially in conjunction with vitamin C.

The paper “Ultraviolet radiation protection potentials of Methylene Blue for human skin and coral reef health” has been published in the journal Scientific Reports.

Methylene blue, a common antioxidant typically used as a dye in chemical processes, is surprisingly good at slowing the signs of aging. In fact, it might actually reverse some of the agings of the skin. Scientists found that changes incurred from applying the chemical to skin cells derived from 80-year-old individuals were permanent.

“Methylene blue demonstrates a great potential to delay skin aging for all ages,” said Zheng-Mei Xiong, lead author of the study and an assistant research professor of cell biology in a statement. 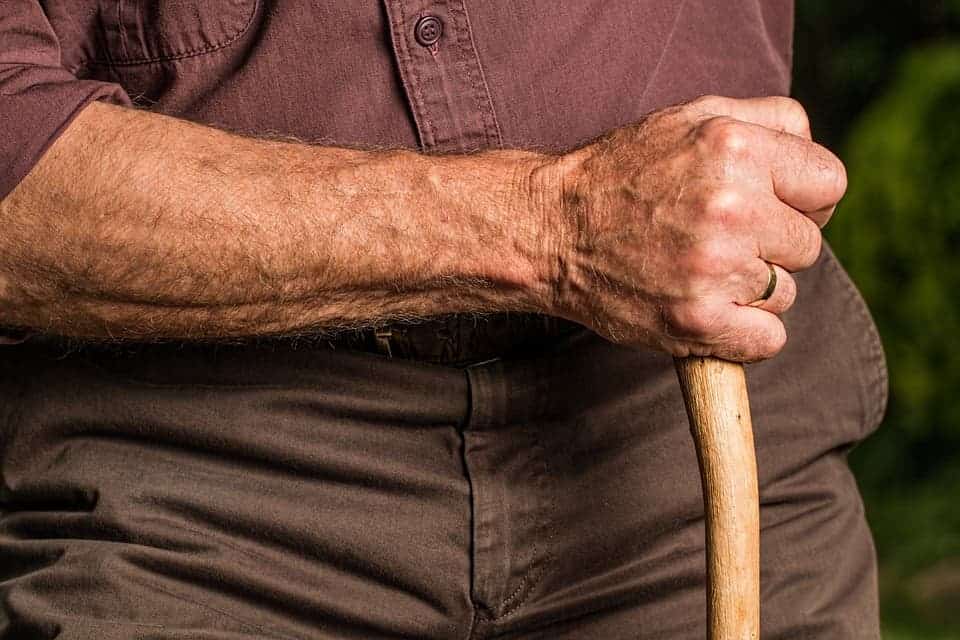 What causes those wrinkles

Aging occurs because, over time, cells stop dividing properly due to DNA damage. In the process, our health, stamina, and vitality suffer. The most visibly aged organ in the human body is, of course, the skin, which becomes wrinkled and gains a different color.

The process that governs aging in the skin can be traced to fibroblasts, which are specialized cells responsible for producing such things as cartilage or bone. Diving in more granularly, it’s fibroblasts that produce collagen. This is the backbone of any kind of skin and is responsible for making skin tough enough so it doesn’t tear easily like a piece of cloth. At the same time, fibroblasts also produce another key protein called elastin, which gives skin flexibility so it can stretch easily. When it’s time for new skin to grow, fibroblasts produce enzymes that instruct cells to break down the old collagen.

Old human skin isn’t very flexible – it’s saggy and wrinkled. By this stage, the fibroblasts have entered an uneven stage of protein production where there’s less collagen being made but more of the enzymes that break it apart. What you end up with is an increasing amount of broken collagen fibers.

In time, the broken fibers drive a feedback cycle that causes the skin to tear easily. Meanwhile, the fibroblast cells also produce less elastin. Thus, aged skin is far less capable of pulling back into an original smooth configuration once it’s been stretched by repeated frowning, smiling, etc.

All of these changes are incurred by natural DNA damage after varying amounts of fibroblast cellular replication. In some people, this DNA damage is more or less pronounced – you’ve seen and know people who look older than their biological age. Likewise, chances are you’ve seen people who look younger (no makeup considered, of course). That’s because there are multiple factors that influence fibroblast DNA damage. For instance, studies have concluded that UV light exposure and certain carcinogens present in cigarette smoke increases the likelihood of DNA damage.

Other studies suggest that some chemicals classed as reactive oxygen species (ROS) can also damage cellular structures, like fibroblast DNA. These oxygen-containing molecules desperately want the electrons of other species or molecules and will gladly rip these from them. This causes oxidative stress in the skin causing it to wear.

Antioxidants are good for counteracting ROS because they neutralize the electron-grabbing-hole-forming chain reaction. And this is where methylene blue comes in.

University of Maryland researchers applied the chemical to skin cells collected from three groups of people: healthy middle-aged donors, individuals over 80 years of age, and individuals who are technically young considering age but otherwise old because they suffer from progeria – the condition that makes people’s bodies age faster than they should normally. Finally, methylene blue in varying amounts was also applied to a lab-grown artificial skin made in layers that mimic natural skin and its epidermis.

The results were striking. The antioxidant effect was powerful in all types of skin and the artificial skin model revealed the chemical helped it retain more water and become thicker, both telltale signs of young skin. That’s not all. This isn’t some patch work. Rather there are indications that methylene blue might actually have a rejuvenating effect.

“The effects we are seeing are not temporary. Methylene blue appears to make fundamental, long-term changes to skin cells,” said senior researcher Kan Cao in a statement. 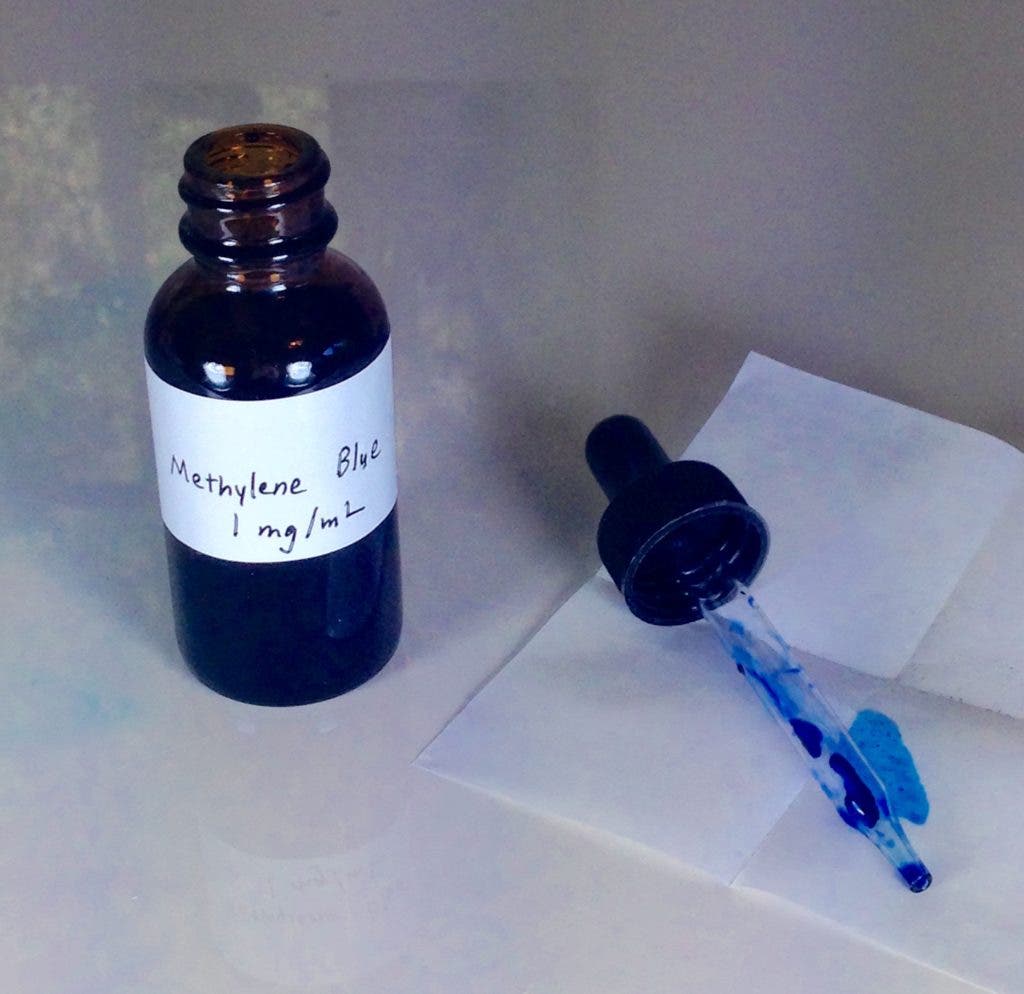 Methylene blue is already used in medicine to treat methemoglobinemia, a condition that causes abnormally high amounts of hemoglobin to enter the blood stream. It’s also often encountered in microbiology labs where it’s used a dye to make the nucleus of various plant and animal cells stand out.

Now, it seems methylene blue is poised to become a major component in novel cosmetic products such as anti-aging creams or sprays. Cao even envisions a future where patients donate some of their cells for doctors to grow skin samples in the lab. This way, after applying varying amounts of the antioxidant, they can come up with a tailored made program that fits the needs of each individual patient. And don’t worry – your skin won’t turn Smurf-blue in the process. While methylene blue makes things blue-tinted, the concentration is too small to produce this effect.

It’s also worth noting that the anti-aging effect, though significant, does not produce over-the-top effects. This is no fountain of youth. This distinction might be reserved to other chemicals and methods that have been shown to have rejuvenating effects. Other promising works involve hormones that stimulate the production of telomerase, an enzyme which keeps cells “young” by stopping their genetic material from shrinking. Elsewhere, Australian researchers administering a certain compound to mice and found muscle degeneration and diseases caused by aging were reversed. And as life is sometimes stranger than fiction, transfusing young blood could be the most promising rejuvenating method yet.

Every once in a while, you hear about the hardest of problems that have really easy solutions. In numerous cases, cures have been found in most common of substances, or even foods. This time, a study led by researchers at Children’s Hospital & Research Center Oakland showed that in small concentrations, something as common as methylene blue could significantly slow down or even cure Alzheimer’s and Parkinson’s disease.

This substance has been used for more than a century, in various situations, including as a treatment for a cold or a flu. The study was conducted by Hani Atamna, PhD, and a his team at Children’s and it was published in the March 2008 issue of the Federation of American Societies for Experimental Biology (FASEB) Journal.

Their research found that methylene blue can slow down or even prevent the decline of mitochondrial function, which leads to the above diseases.

Methylene blue was first discovered more than 100 years from now, in 1891. It is used also for treating methemoglobinemia, a blood disorder. It is a well known fact that when taken in large quantities, it affects the brain. But what comes out as a surprise, at least to me, is that this fact alone was enough to discourage scientists to experiment with smaller quantities.