Large grazing animals have a strong selective force on plants, certain plants have evolved traits to thrive on pastoral landscapes. In the Himalayas, yaks (such as the one depicted here) were a significant evolutionary driver. Image credits: Robert Spengler.

In the history of mankind, few things have been as influential as domestication. Whether it’s plant or animal domestication, this process has enabled our species to lay the foundation of what we now call society. Having access to a reliable source of nutrients enabled settlements to develop and thrive.

It’s not exactly surprising. It’s been known for quite a while that many familiar grains have common traits suggesting that they coevolved to be dispersed by large grazing mammals. Essentially, the changes in the plant biomes were driven by changes in animal behavior — which themselves were driven by domestication.

Robert Spengler, director of the Paleoethnobotany Laboratories at the Max Planck Institute for the Science of Human History, and Natalie Mueller, a National Science Foundation fellow at Cornell University, write that the progenitors of small-seeded crops evolved to be dispersed by domesticated animals. They looked at the herbivory patterns and the rangeland these herbivores would have inhabited. Although these wild varieties now only grow in isolated patches, these patches are much more common near rivers or other areas that animals were more likely to frequent. Growing in patches also made harvesting them easier for early human populations.

The study was carried out in North America, where, for a long time, the domestication of plants wasn’t well understood. The missing puzzle piece was bison. As the massive bison herds moved throughout North America, they dispersed these plants in relatively compact areas, leaving a trail of vegetation behind them. But as the European populations slaughtered the bison, the plant populations also started to dwindle.

[Also Read: How megafauna and humans shaped the apple’s domestication]

Bison herds, once dominant across many areas of the US, are now functionally extinct. Image via NPS.

However, this process wasn’t restricted only to North America. Elsewhere in the world, other grazers also helped spread certain plant populations, something which humans took advantage of. As domesticated animals became more and more common, they also played a selective role.

“Small-seeded annuals were domesticated in most areas of the world,” explains Spengler. “So the ramifications of this study are global-scale. Scholars all over the world will need to grapple with these ideas if they want to pursue questions of domestication.”

For decades, researchers have debated why early human foragers preferred small-seeded annual plants as a major food source (which ultimately led to their domestication). The fact that these plants would have been easy to harvest and preferable by animals probably contributed to their ultimate domestication.

Now, researchers want to further analyze this idea and see how other ruminant megafauna contributed to the distribution and domestication of plants all around the world.

“Currently, we’re studying the ecology of fields where modern herd animals graze as proxies to what the ecology would have looked like during the last Ice Age, when large herds of bison, mammoths, and wooly horses dictated what kinds of plants could grow across the American Midwest and Europe,” explains Spengler. “We hope these observations will provide even greater insight into the process of domestication all over the world.”

The study was published in Nature Plants. 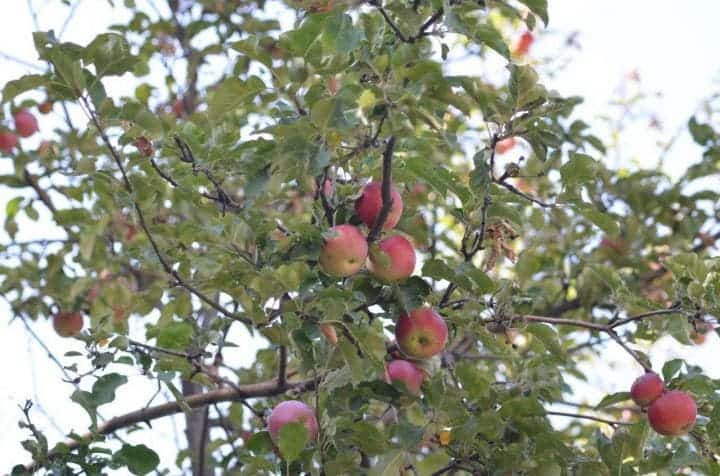 Apples are perhaps the most familiar fruit in the world but have you ever stopped to wonder how these delicious treats appeared? The path apples had to take from their humble wild origins, thousands of years ago, to farmer’s markets around the world was quite complicated — but also very interesting. Unlike other crops that humans have domesticated, today’s sweet apples are owed to extinct megafauna, as well as Silk Road traders, scientists write in a new study.

Apples have occupied an important role in humans’ diets since ancient times. We know from art depictions that humans had domesticated the fruits in southern Europe from at least 2,000 years ago. What’s more, ancient seeds found at archaeological sites suggest that humans had been foraging wild apples in Europe and West Asia for more than 10,000 years.

Previously, scientists performed genetic studies establishing that the modern apple is a hybrid of at least four wild apple populations. But how did these different types of apples interact in the first place? According to archaeological evidence, in the form of apple seeds discovered at various sites across Eurasia, apples, as well as other fruit and nut trees, were among the commodities that moved on the Silk Road. To support this hypothesis, much of the modern apple’s genetic material can be traced back to the Tien Shan Mountains in Kazakhstan, an important node in the ancient trade route.

But even long before the Silk Road was founded, the course of apple breeding and evolution was shaped by another major selective force — and it wasn’t humans. Writing in a new study, researchers led by Robert Spengler of the Max Planck Institute for the Science of Human History, documented the processes that set the stage for the modern apple’s domestication.

“Seeing that fruits are evolutionary adaptations for seed dispersal, the key to understanding fruit evolution rests in understanding what animals were eating the fruits in the past,” Spengler explains.

Other fruiting plants in the same family as the apple, known as Rosaceae, generally have small fruit (cherries, roses, raspberries etc). These small fruits are advantageous because they can be easily swallowed and dispersed by birds. However, apples, as well as pears, quince, and peaches, evolved large fruits that were too large for birds to disperse their seeds. According to Spengler, the role of apple seed disperser fell onto large animals, particularly European megafauna such as wild horses or large deer who were attracted by the fruit. 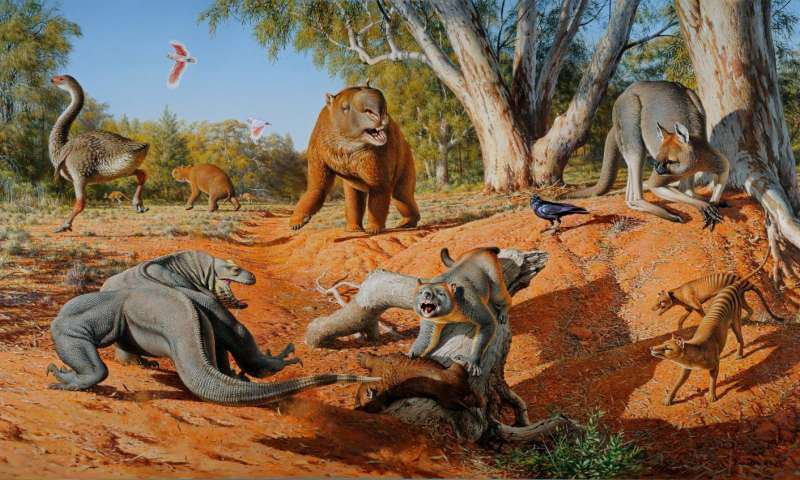 A menagerie of megafauna that inhabited Australia some 45,000 years ago. Credit: Peter Trusler, Monash University.

Spengler and colleagues back their claims with evidence of weak dispersal of wild apple seeds during the past 10,000 years — a period when megafauna became extinct. What’s more, wild apple populations have moved very little over glacial zones of the Ice Age, suggesting that the plants had been moving over long distances in the absence of seed-spreaders.

[panel style=”panel-success” title=”What is megafauna and what happened to it? ” footer=”Credit: American Museum of Natural History”]You’ve probably heard of woolly mammoths and giant ground sloths—but what about a gorilla-sized lemur and 500-pound birds? Ross MacPhee uses colorful illustrations to take us on a journey back in time to the world of the now extinct “megafauna,” and explains what scientists think may have happened to them.

Without megafauna to move them, wild apple tree populations stayed isolated after the last Ice Age. But then humans started foraging the fruit, moving them across Eurasia along the Silk Road. The traders brought various lineages into contact, causing hybridization. These hybrids produced large fruits — a common trait of hybridization — and humans started to fixate this trait in place through grafting and selecting cuttings of the most favored trees. 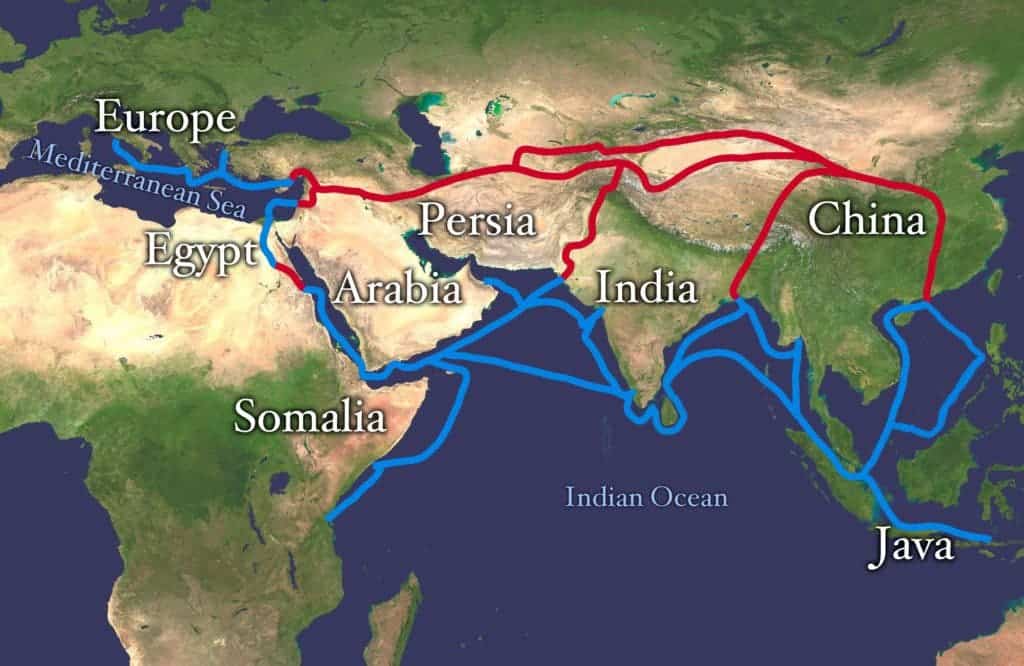 Both of these major forces — hungry megafauna and exploring human traders — shaped the modern apple that we all know and hold dear. The most intriguing part of the study, however, lies in the fact that it shows that domestication isn’t a clear-cut process. Rather than employing a long and tedious selection and propagation process, modern apples appeared quickly thanks to hybridization.

“The domestication process is not the same for all plants, and we still do not know much about the process in long-generation trees,” notes Spengler. “It is important that we look past annual grasses, such as wheat and rice, when we study plant domestication. There are hundreds of other domesticated plants on the planet, many of which took different pathways toward domestication.”

The findings appeared in the journal Frontiers in Plant Science.

Megafauna is an umbrella term for massive ancient mammals like the sabretooth tiger, the woolly mammoth, the woolly rhino and the giant armadillo. These animals were extremely successful for hundreds of thousands of years, having survived many climate change events like ice ages. All of these animals, however, went extinct over the course of 80,000 years, with the last ones being wiped just 10,000 years ago.

Scientists have debated whether a lone climate event, human hunting or both had been responsible for this massive die off. Mounting evidence seems to point towards the latter.

All across the world, archaeologists have found butchered bones of the supersized mammals, like bears ten times bigger than today’s grizzlies. Some of this forensic evidence comes from Patagonia from 13,000 years or around the time humans started settling the Americas, which sort of fits the narrative that hunters wiped out the megafauna.  Alan Cooper, an evolutionary biologist at the University of Adelaide in Australia, says that this is just one side of the picture. Recent developments suggest humans were in the Americas even 15,000 years ago which can only mean there were periods lasting thousands of years of equilibrium before the species were finally destroyed from the face of the Earth.

Cooper and colleagues turned to ice cores drilled from Greenland and Antartica. Trapped in the ice were telltale signs that the planet’s average temperatures jumped fast around 12,000 years ago. Patagonia warmed by as much as  2°C over 1000 years and all of the species Cooper studied went extinct during this time, as reported in Science Advances. All but one, a lone survivor called the guanaco which is a llama relative and still alive today.

Dramatic shifts in climate were common occurrences, yet the megafauna survived them. But not anymore after humans entered the picture, Cooper said. His opinion seems to be backed by a massive study undertaken last year by scientists from  Exeter and Cambridge University. They ran a statistical analysis in which all the possible times megafauna species could have become extinct were scrutinized, then set against the times humans first arrived in various places. The conclusion was stark:

“As far as we are concerned, this research is the nail in the coffin of this 50-year debate — humans were the dominant cause of the extinction of megafauna,” said Lewis Bartlett, from the University of Exeter’s Centre for Ecology and Conservation, which ran the study. “What we don’t know is what it was about these early settlers that caused this demise.

“Were they killing them for food, was it early use of fire or were they driven out of their habitats? Our analysis doesn’t differentiate, but we can say that it was caused by human activity more than by climate change. It debunks the myth of early humans living in harmony with nature.”

Still many questions are left unanswered. Did humans populations rise rapidly following global warming upping demand for game? Did humans disrupt the migration of species looking for new habitats? We might one day find out, as science inches in on the truth, one question and answer at a time.