The Curiosity Rover is earning its keep, sending back more and more valuable information about the Red Planet. 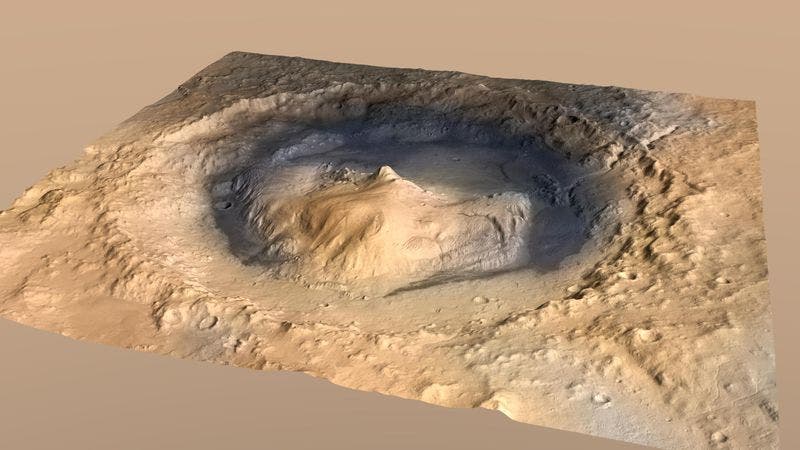 A rendering of Gale Crater, with Mount Sharp at its center. The Curiosity rover is currently exploring this area, trying to find whether Mars could have supported life. Image credits: NASA.

When researchers and engineers decided to land Curiosity inside Gale Crater, they didn’t choose randomly. The crater, which contained a massive lake, was chosen because due to its structure, there’s a good chance of learning many of Mars’ geological secrets. While it was already established that Mars held water, the conditions of the water and the overall environment is still unclear. Now, this research shows that not only was the planet hosting a lot of water — it had lakes much like those on Earth.

Geochemist Joel Hurowitz from Stony Brook University led a large team that analyzed over 100 meters of rock layers in Gale Crater. To reconstruct the past environment, they measured the aluminum inside each layer, plotting it against minerals like sodium and calcium, which easily leach out of the rock. Basically, warm water is more chemically active than cold water. During warm conditions, water is better at dissolving and absorbing stuff (just like how sugar melts easier in hot water). In this case, if a rock has a lot of aluminum but not so much sodium or calcium, it indicates that it formed in a warmer environment.

Oxygen was another key component they looked at. There are sharp differences between deeper and more shallow water, in terms of oxygen content. By adding the oxygen content into the mix, researchers were able to show that the lake was a diverse feature, much like those on Earth. These conditions also apparently lasted for a very long time: some 700 million years!

“These were very different, co-existing environments in the same lake,” said Joel Hurowitz of Stony Brook University, lead author of the report. “This type of oxidant stratification is a common feature of lakes on Earth, and now we’ve found it on Mars. The diversity of environments in this Martian lake would have provided multiple opportunities for different types of microbes to survive.”

“This is a new level of detail in terms of our understanding of the chemical environment in this lake on Mars,” Hurowitz added. “It gives us a much more complete picture of the habitability of this lake.” 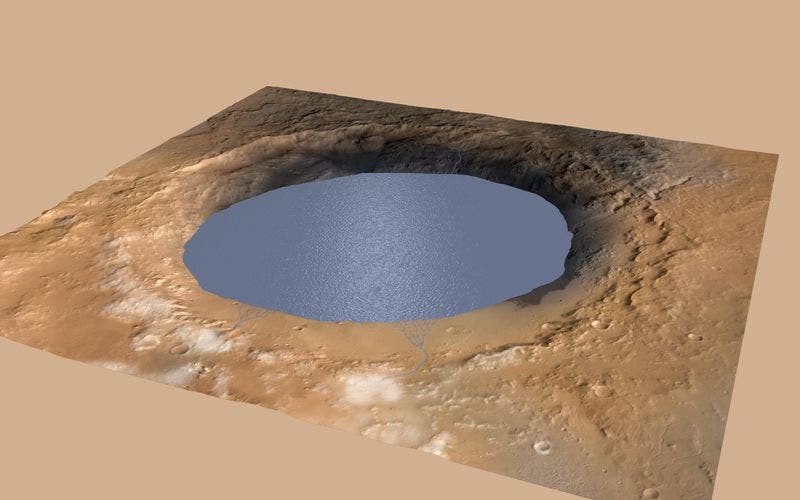 We still don’t know if Mars did have any life (and if it did, we shouldn’t get our hopes up for anything bigger than microbial), but having a complex lake system, with warm water ranging from shallow to deep is definitely exciting. It means it could have supported several different types of microbes. Some microbes thrive in low-oxygen environments, while other prefer the opposite. Keep in mind that scientists are looking into a time when photosynthesis hadn’t even evolved on Earth, so we’re not sure what kind of microbial life Mars might have hosted.

“We’re learning that in parts of the lake and at certain times, the water carried more oxygen,” said Roger Wiens, a planetary scientist at Los Alamos National Laboratory and co-author of the study, published today in the journal Science. “This matters because it affects what minerals are deposited in the sediments, and also because oxygen is important for life. But we have to remember that at the time of Gale Lake, life on our planet had not yet adapted to using oxygen–photosynthesis had not yet been invented. Instead, the oxidation state of certain elements like manganese or iron may have been more important for life, if it ever existed on Mars. These oxidation states would be controlled by the dissolved oxygen content of the water.” 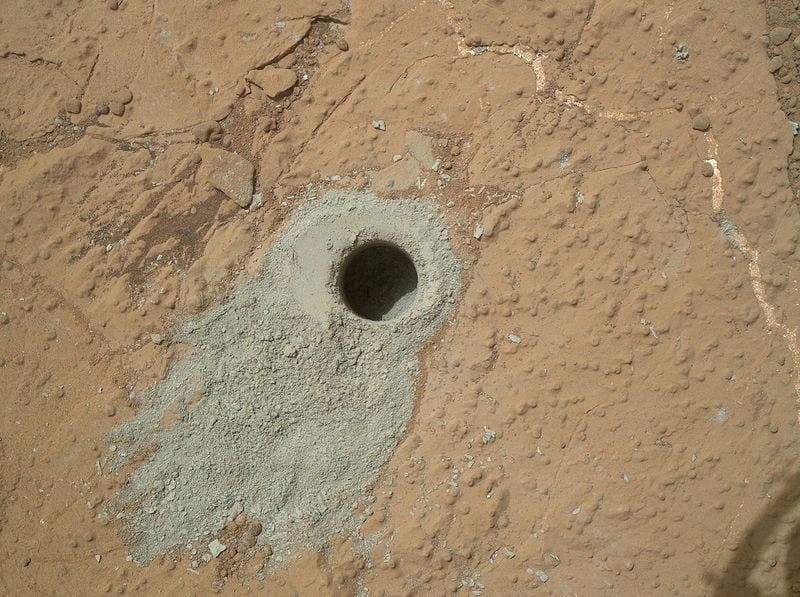 A drilled hole made by Curiosity. Image credits: NASA / JPL.

Researchers were surprised by the accuracy of the Curiosity analysis, and how much we can deduct from that. But put together, this makes a lot of sense.

“What was causing iron minerals to be one flavor in one part of the lake and another flavor in another part of the lake?” Hurowitz asked. “We had an ‘Aha!’ moment when we realized that the mineral information and the bedding-thickness information mapped perfectly onto each other in a way you would expect from a stratified lake with a chemical boundary between shallow water and deeper water.”

A hypothesized model of a redox-stratified lake in Gale crater — just like a lake on Earth. Source: NASA / JPL.

In total, Curiosity has been on Mars for over 1,700 sols (martian days, which are 24 hours, 39 minutes long), traveling 16 km from the bottom of Gale Crater towards the peak of Mount Sharp. Its main objective is determining whether Mars could have supported life, by analyzing nature and inventory of organic carbon compounds, investigating the chemical components which could serve as the building blocks of life, identifying biosignatures of life, investigating the chemical, isotopic, and mineralogical composition of the Martian surface, interpreting geological processes taking place and assessing the broad spectrum of surface radiation, which is necessary for a future manned mission to Mars.

As for whether Mars does host life now, unfortunately, that’s not an answer Curiosity is equipped to answer. We’ll have to wait a few more years for NASA’s next Mars mission to figure that one out.