NASA’s Mars rover, the Perseverance, was aptly named. After delaying its launch (July 17) by three days, the agency has now rescheduled it for July 22 due to “a contamination concern”.

The agency initially delayed the launch due to issues with ground equipment, namely a faulty crane. As this was being fixed, engineers also ran into trouble as they were mounting the Atlas V rocket’s nosecone to its body (creating the space that transports the rover). Due to this, Perserverence’s launch was rescheduled for July 22, NASA said on Wednesday.

Earth and Mars don’t stay at a constant distance all the time. They move around the Sun at different speeds and on different orbits. The launch window to Mars, the span of time when its closest to Earth, is open until Aug. 11. So despite the delay, NASA isn’t worried about not being ready on time.

“NASA and United Launch Alliance [who built the rocket] are now targeting Wednesday, July 22, for launch of the Mars 2020 mission due to a processing delay encountered during encapsulation activities of the spacecraft,” the agency writes.

NASA adds that “the spacecraft and vehicle remain healthy”, and successfully performed a refueling test on Monday.

Launch director Omar Baez said in a news conference that “[they] have plenty of window or runway ahead of us and we’re not worried about it”. He said that further setbacks from “not-so-perfect days” are probable but that the team will still be ready for launch. It may even be possible to extend the launch window to Aug. 15, Baez added.

Perseverance is scheduled to land on Mars on Feb. 18, 2021. Its target is the Jezero Crater, a 49 km (30.5 mi) wide crater thought to have contained liquid water at some point in the past. There, it will look for signs of ancient life and take samples that will be retrieved on a later mission. One of its most important tasks is to test MOXIE — a system that creates oxygen from the Martian atmosphere, which is rich in carbon dioxide.

Perseverance’s design is largely based on the Curiosity rover, the last rover to land on Mars. It’s heavier, carries fewer instruments, but is also equipped with a nuclear power source — which should keep the rover running for a long time.

Perseverance is the first rover to also bring along a colleague: Ingenuity, the first helicopter sent to space. The tiny flier will initially make three test runs in the Martian atmosphere, though it could make more if everything goes well.

Of course, this all hinges on NASA making the launch window. If they don’t, we will have to wait for another 26 months for the two planets to properly align again.

In just a year’s time, NASA will launch a new robotic rover mission to Mars. The mission, temporarily called “Mars 2020”, will involve the collection and retrieval of rock and soil samples to Earth. This means there’s gonna be quite a bit of heavy lifting involved. Luckily, a recent demonstration showed that the rover is up for the task.

The rover’s arm and turret are some of its most important parts. They must work together to emulate the arm of a geologist that’s examining and collecting samples. Recently, at the Jet Propulsion Laboratory’s Spacecraft Assembly Facility in Pasadena, California, NASA engineers instructed the rover’s 88-pound arm to perform a bicep curl as it moved from a deployed to a stowed configuration.

“This was our first opportunity to watch the arm and turret move in concert with each other, making sure that everything worked as advertised — nothing blocking or otherwise hindering smooth operation of the system,” said Dave Levine, an integration engineer for Mars 2020.

“Standing there, watching the arm and turret go through their motions, you can’t help but marvel that the rover will be in space in less than a year from now and performing these exact movements on Mars in less than two.”

In its final configuration, the rover’s arm will have five electrical motors and five joints. The turret will be equipped with cameras, life and chemical element detection instruments, a percussive drill, and a coring mechanism.

The mission’s launch is planned for July 2020 and scheduled to land at Jezero Crater on Mars in February 2021. Although a future return trip to Mars to retrieve the rover’s collected samples hasn’t yet been put in motion, nor is it clear if it’s feasible at this moment, NASA believes that sample collection from Mars merits much attention. NASA also says that many aspects of the upcoming Mars 2020 mission will shape the technology required for human missions on the Red Planet.

This will be NASA’s seventh mission to touch down on Mars, joining the likes of Curiosity, InSight lander, Spirit, and Opportunity. In order to find a cool name as its predecessors, NASA has put out a call for K-12 students in US schools, offering them the chance to name the 2020 rover. This is somewhat of a tradition now. Before it was dubbed Curiosity, the previously-deployed plucky rover was known as the Mars Science Laboratory.

A piece of Mars is going home — NASA engineers want to use a chunk of Martian meteorite to calibrate a future science mission. 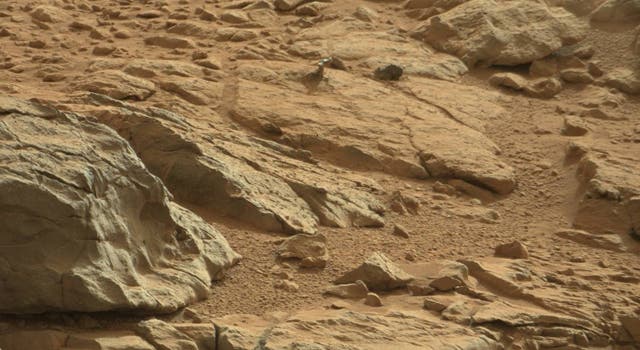 In 2002, a rather odd-looking rock was found in the Uhaymir region of Oman. Weighing no more than 206 grams (0.45 pounds), it drew the attention of geologists and astronomers. Based on its chemical and isotopic composition, they dated the impact at around 9,700 years ago and traced its origin back to Mars. Now, the meteorite named Sayh al Uhaymir 008 (SaU008) will be going back home, hitching a ride on NASA’s Mars 2020 rover mission.

Mars 2020 is an ambitious mission: not only does it plan to collect samples from the Red Planet’s surface and save them for a future retrieval mission, but it also wants to carry out chemical analyses on rock features as fine as a human hair.

However, working with such fine details is no easy task, and it requires a lot of fine-tuning and calibration. This isn’t necessarily a new thing, as previous NASA missions have used calibration before — but if you’re calibrating things, why not use the real thing as a scale?

“We’re studying things on such a fine scale that slight misalignments, caused by changes in temperature or even the rover settling into sand, can require us to correct our aim,” said Luther Beegle of JPL. Beegle is principal investigator for a laser instrument called SHERLOC (Scanning Habitable Environments with Raman and Luminescence for Organics and Chemicals). “By studying how the instrument sees a fixed target, we can understand how it will see a piece of the Martian surface.” 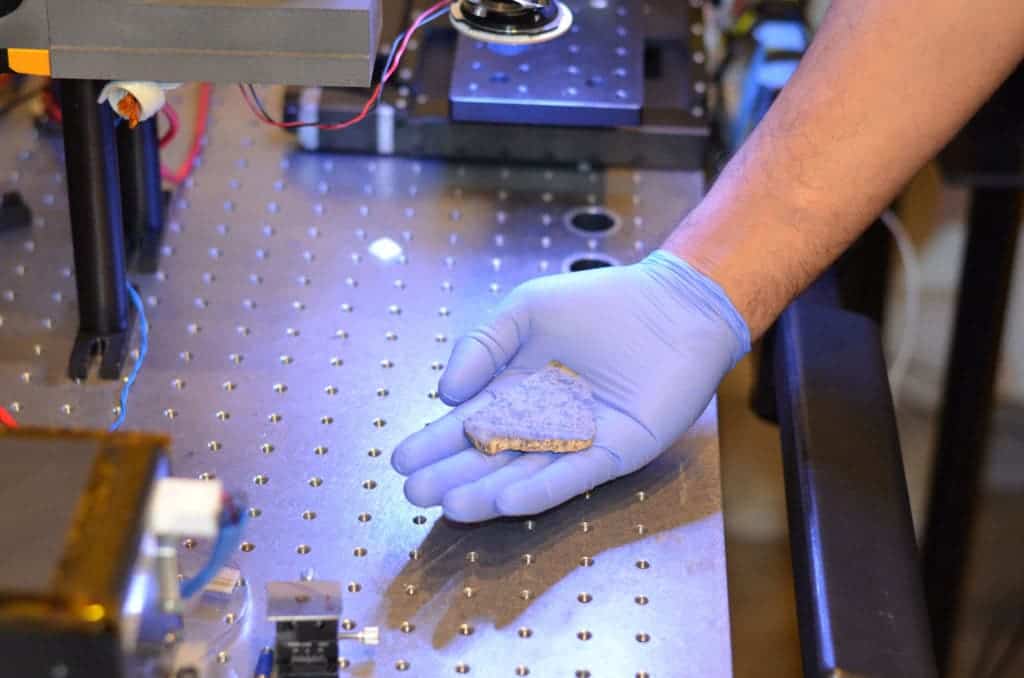 Rohit Bhartia, a member of NASA’s Mars 2020 mission, holds a slice of a meteorite, which scientists have determined came from Mars. One of two slices will be used for testing a laser instrument for NASA’s Mars 2020 rover while it’s still on Earth; the other slice will go to Mars onboard the rover. Image Credit: NASA/JPL-Caltech.

The plan is to study the meteorite on Earth, measure it thoroughly and write down its physical parameters. Then, when the new rover will settle down on Mars, it will re-scan the meteorite and see if it gets the same results. If something went wrong along the way, then at least researchers will be able to compensate the error. You can perform this sort of calibration with any viable sample, but having one that’s similar to your intended target (in this case, Martian rocks) can add that extra bit of precision — but there’s a catch.

Martian meteorites are quite rare, with only 200 being confirmed by The Meteoritical Society, which has a database of these meteorites. So they’re quite precious and difficult to come about. To make things even more difficult, not any meteorite would do — it needs to be one which features certain chemical features to test SHERLOC’s sensitivity. These features need to be reasonably easy to detect, in order to easily ensure repeatability. The sample also needs to be sturdy, as flaky pieces can break off and damage or destroy the equipment.

Ultimately, they found the right sample at the Natural History Museum of London, where it was made available by courtesy of Caroline Smith, principal curator of meteorites at the museum.

“Every year, we provide hundreds of meteorite specimens to scientists all over the world for study,” Smith said. “This is a first for us: sending one of our samples back home for the benefit of science.”

Aside from the meteorite, Mars 2020 will also carry materials that could be used to make spacesuit fabric, gloves, and a helmet’s visor. Seeing how they hold up in the rugged Martian environment will be key for the planning of manned missions to the Red Planet.

“The SHERLOC instrument is a valuable opportunity to prepare for human spaceflight as well as to perform fundamental scientific investigations of the Martian surface,” said Marc Fries, a SHERLOC co-investigator and curator of extraterrestrial materials at Johnson Space Center. “It gives us a convenient way to test material that will keep future astronauts safe when they get to Mars.”