The macula lutea (an oval region at the center of the retina) is responsible for the central, high-resolution color vision that is possible in good light; when this kind of vision is impaired due to damage to the macula, the condition is called age-related macular degeneration (AMD or ARMD). Macula lutea means ‘yellow spot’ in Latin.

Picture of the back of the eye showing intermediate age-related macular degeneration.
Via Wikipedia

Douglas Waters, an 86-year-old from London, had lost his vision in July 2015 due to severe AMD. After a few months, Waters became part of a clinical trial developed by UC Santa Barbara researchers that used stem cell-derived ocular cells. He received his retinal implant at Moorfields Eye Hospital, a National Health Service (NHS) facility in London, England.

Before the surgery, Water’s sight was very poor, and he wasn’t able to see anything with his right eye. After the surgery, his vision improved so much that he could read the newspaper and help his wife in the garden.

The study, published in Nature Biotechnology, shows groundbreaking results. Researchers could safely and effective implant a specially engineered patch of retinal pigment epithelium cells derived from stem cells to treat people with sudden severe sight loss from wet AMD. This is the first time a completely engineered tissue has been successfully transplanted in this manner.

Douglas Waters was struggling to see up close after developing severe macular degeneration, but 12 months on he is able to read a newspaper again

AMD usually affects people over the age of 50 and accounts for almost 50% of all visual impairment in the developed world. The condition disturbs central vision responsible for reading, leaving the surrounding eyesight normal. Wet AMD is caused by hemorrhage or liquid accumulation into the region of the macula, in the center of the retina. Wet AMD almost always starts as dry AMD. Researchers believe that this new technique will be the future cure for dry AMD.

Scientists wanted to see whether the diseased retinal cells could be replenished using the stem cell patch. They used a specially engineered surgical tool to insert the patch under the affected retina. The operation lasted almost two hours.

Besides Water, another patient, a 60-year-old woman who also suffered from wet AMD, underwent the surgery. The two patients were observed for one year and reported improvements to their vision. The results were incredible — the patients went from being almost blind to reading 60 to 80 words per minute with normal reading glasses.

“We hope this will lead to an affordable ‘off-the-shelf’ therapy that could be made available to NHS patients within the next five years,” said Coffey, who founded the London Project to Cure Blindness more than a decade ago.

An 80-year-old man suffering from age-related macular degeneration (AMD) – the most common cause of sight loss in the world – can now see again after being fitted with a bionic eye. The technology was developed at the Manchester Royal Eye Hospital, and the implant marks the first trial for the Argus II system for AMD. 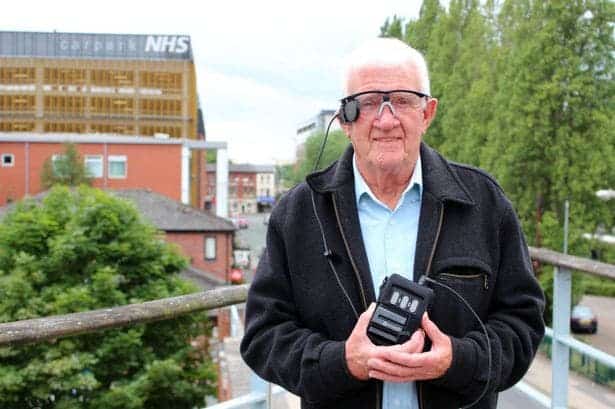 The pensioner from Audenshaw, Ray Flynn, underwent surgery to fit the Argus II in June. The implant was fitted in the retina, while a camera mounted on a pair of glasses sends wireless signals direct to the nerves which control sight. The signal is then decoded by the brain directly. Thanks to the Argus II and the dedication of the doctors from the Oxford Road hospital Flynn can now make out the outlines of people and objects.

“As far as I am concerned, the first results of the trial are a total success, and I look forward to treating more dry AMD patients with the Argus II as part of this trial. We are currently recruiting four more patients to the trial in Manchester.” 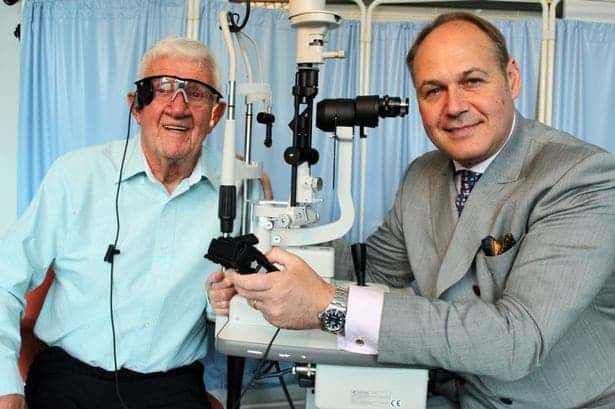 A long time ago I wrote a piece on the developments made by a group at University of California, Berkeley that managed to restore light perception to blind mice without using invasive procedures like surgery. A chemical was used and just as easy as putting some eye drops, the researchers enabled mice to sense light when such a thing wasn’t possible before. Now, the same group has developed a new chemical that works much in the same way as the previous one, only much better: it lasts longer and isn’t potentially dangerous like before. Hopefully, this chemical or some upgraded version may be used in treating patients suffering from degenerative retinal disorders.

The retina is comprised of three layers, but only the outermost layer is photoreceptice, containing  the rod and cone cells that respond to light. When the rods and cones die during the course of degenerative blinding diseases,  like  retinitis pigmentosa and age-related macular degeneration, the rest of the retina is still intact – it’s just that it’s not responsive to light causing loss of sight.

The new chemical called DENAQ, which replaced AAQ,  confers light sensitivity for several days with ordinary white light and only impacts retinal ganglion cells if the rods and cones have already died. The latter part is really important since if you still have functioning eye sight, in the sense that you’ve already lost a bunch of ganglion cells but not all of them, those cells that are still active won’t be affected by the chemical. The previous AAQ photoswitch chemical  required very bright ultraviolet light, which can be damaging, to work.

“Further testing on larger mammals is needed to assess the short- and long-term safety of DENAQ and related chemicals,” says Richard Kramer of the University of California. “It will take several more years, but if safety can be established, these compounds might ultimately be useful for restoring light sensitivity to blind humans.”

Findings were reported in the journal Neuron. 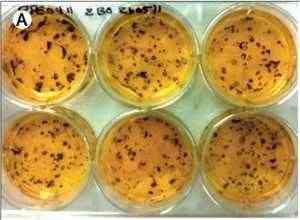 Pigmented epithelial cells were grown from embryonic stem cells prior to injection.

Detailed in a recently published study, a team of ophthalmologists have successfully managed to improve the vision of both of their trial patients, which were declared legally blind due to macular degeneration, by inserting human embryonic stem cells into one eye of each person. Significant improvements were recognized shortly after the procedure, and continued to progress positively in the months that came after, as well. The other eyes that were left untreated remained in the same poor condition as prior to the operation .

Macular degeneration is the leading cause of vision loss among the elderly, while Stargart’s muscular dystrophy, or Stargart’s disease, is a common cause of vision loss among children and young people. Drugs, laser treatment of the retina and so forth only help in slowing down the process, but the end scope of these diseases cannot be derailed, and hence are considered incurable.

Stem cell treatment has been considered an option before, however the procedure conducted by the team of scientists, lead by Steven Schwartz, an opthalmologist and chief of the retina division at UCLA’s Jules Stein Eye Institute, is the first one of its kind.

“This is a big step forward for regenerative medicine, said Dr. Steven Schwartz at UCLA’s Jules Stein Eye Institute. “It’s nowhere near a treatment for vision loss, but it’s a signal that embryonic stem-cell based strategies may work.

The operation involved injecting stem cells into one of each patient’s eye, a 78 year old woman suffering from macular degeneration and another woman, aged 51, who suffered from Stargardt’s macular dystrophy, both declared legally blind, with hopes that the cells required for proper vision will regenerate. The stem cells were treated before being injected into the patients’ eyes, as they were induced to grow into retinal pigment epithelial cells. The loss of these cells located in the pigmented layer of the retina is the leading cause of macular dystrophy.

The results post the half hour surgery, in which 50,000 stem cells were injected, were remarkable – just a few weeks after the patients went from barely recognizing a hand to counting fingers, reading their own handwriting, pouring a glass of water without spilling it all over the floor and so on. In short, they were given the chance to live a normal life once more. Their vision continued to improve months after the surgery. The patients were also given immunosuppressants to prevent their bodies from rejecting the foreign tissue.

Other scientists have recently commented upon the research, admitting the results are indeed remarkable, while warning at the same time that the trial was conducted only on two persons,  and the improvements can still be considered short-term. Extensive studying on a broader range of patients and over longer time is required to accurately measure the effectiveness of stem cell treatment for this kind of operation.

According to Dr. Robert Lanza, chief scientific officer at Advanced Cell Technology and a co-author of the study, the embryo was destroyed after the stem cells were derived, but in the future, doctors will be able to derive stem cells from an embryo without destroying it.

The research was published in the journal The Lancet.