The great part of Earth’s liquid outer core comprises of molten iron, which is just swell for us and every inhabitant of our planet, because this layer generates a magnetic field which protects us from radiation which would be lethal. But common accepted theory suggests that there should also be some lighter ingredients down there, judging by its density, which can be estimated through seismic research; the usual suspect was, of course, oxygen, which is present in high quantities in and outside of Earth, but as it turns out, oxygen isn’t the culprit here. This has been deduced through seismic research as well. 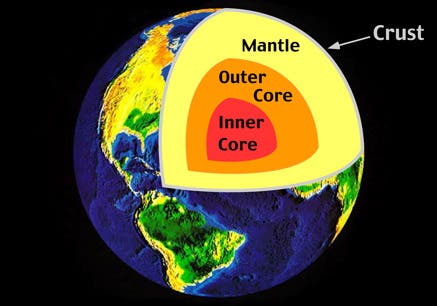 “We can’t sample the core directly, so we have to learn about it through improved laboratory experiments combined with modeling and seismic data,” explains the Carnegie Institute’s Yingwei Fei.

So, sorry to disappoint you, but there’s no mole people expedition going on, just hard work in a lab. Fei and his colleagues mixed up various alloys of iron and lighter materials and then introduced them to conditions of temperature and pressure similar to those in the outer core, then carried seismic tests on them to see if they match with reality. As it turns out, whatever the outer core is built of, it isn’t iron and oxygen.

“The research revealed a powerful way to decipher the identity of the light elements in the core. Further research should focus on the potential presence of elements such as silicon in the outer core,” says Fei.