It’s really getting crowded up there! The immediate area around Earth is cluttered with space debris, with recent estimates suggesting almost 4,000 man-made satellites in a near-Earth orbit, only one-third of which are currently operational. These non-operational units are subject to leakage, fragmentation and even explosions — further littering the immediate region around our planet. On top of this is a further population of near 20,000 known space debris objects.

If humanity is going to continue to exploit the space immediately surrounding the Earth measures need to be taken to avoid this space debris. Collisions between this space junk and operating satellites aren’t just costly and damaging, they also create more debris. Now researchers at the University of Bern have made a breakthrough that just might help satellites avoid just collisions.

The Bern team is the first in the world to successfully determine the distance from Earth to a piece of space junk in daylight. The researchers performed the feat on June 24th using a geodesic laser fired from Swiss Optical Ground Station and Geodynamics Observatory Zimmerwald. The achievement opens up the possibility of spotting space debris during the day, this means that possible collisions between satellites and space debris can be identified early and mitigation strategies such as evasive manoeuvres can be implemented earlier.

Spotting space debris during the day should help prevent events such as the collision that occurred between the operational communications satellite Iridium 33 and the obsolete Cosmos 2251 communications satellite in 2009. Occurring at an altitude of 800 km over Siberia the impact at 11.7 km/s created a cloud of over 2000 pieces of debris — each larger than 10 cm in diameter. Within a matter of months, this cloud of debris had spread across a wide area, and it has been a threat to operational satellites ever since.

But one positive did come out of the event, it made both scientists and politicians wake-up to the fact that the problem of space debris can no longer be ignored.

In fact, the risk of collision with space junk in certain orbits around the Earth is so great, that evasive manoeuvres are commonplace. The ESA alone receives thousands of collision warnings for each satellite in its fleet per year! This leads to satellites performing dozens of evasive acts each year. But, it’s vitally important to accurately assess when evasive action is actually needed as they can be costly and time-consuming to perform.

“The problem of so-called space debris — disused artificial objects in space — took on a new dimension,” says Professor Thomas Schildknecht, head of the Zimmerwald Observatory and deputy director of the Astronomical Institute at the University of Bern. “Unfortunately, the orbits of these disused satellites, launcher upper stages or fragments of collisions and explosions are not known with sufficient accuracy.”

Thus, as well as reducing collision risk, daytime observations of space debris could mean that unnecessary evasive action is avoided. There could be another benefit to early debris detection too.

Many researchers are currently investigating the possibility of missions to clear space debris. One such example is the work of Antônio Delson Conceição de Jesus and Gabriel Luiz F. Santos, both from the State University of Feira de Santana, Bahia, Brazil, recently published in the journal EPJ Special Topics. The pair modelled the complex rendezvous manoeuvres that would be required to bring a ‘tug vehicle’ into contact with space junk. Better positioning debris clusters could assist these efforts considerably.

Currently, the position of space debris can only be estimated with a precision of around a few hundred metres, but the team from Bern believe that using the satellite laser ranging method they employed to make their daylight measurement, this margin of error can be slashed down to just a few meters, a massive improvement in accuracy.

“We have been using the technology at the Zimmerwald Observatory for years to measure objects equipped with special laser retroreflector,” Schildknecht says, adding that these measurements were also previously only possible to make at night. “Only a few observatories worldwide have succeeded in determining distances to space debris using special, powerful lasers to date.”

Despite providing more accurate measurements, geodetic laser systems such as the one at the Zimmerwald observatory employed by the researchers are actually at least one order of magnitude less powerful than specialized space debris lasers. Additionally, detecting individual photons diffusely reflected by space debris amid the sea of daylight photons is no mean feat.

These problems were overcome by the use of highly sensitive scientific CMOS camera with real-time image processing to actively track the space junk, and a real-time digital filter to detect the photons reflected by the object.

“The possibility of observing during the day allows for the number of measures to be multiplied. There is a whole network of stations with geodetic lasers, which could in future help build up a highly precise space debris orbit catalogue,” Schildknecht concludes. “More accurate orbits will be essential in future to avoid collisions and improve safety and sustainability in space.”

Space is a dirty place, so the ISS needs some lasers to blast it clean, researchers propose.

If you’re a fan of Sci-Fi, we’re in luck — an international group of scientists wants to see our most burning desire made real. They propose to install a laser defense system aboard the International Space Station (ISS) to blast at litter in the near-Earth orbit.

The idea of ‘arming’ the ISS with laser batteries isn’t new but we’re just now getting to a place where we can develop systems compact and reliable enough to be practical aboard the station. To jump-start development, an international team of researchers from France, Italy, Japan, and Russia is pooling their efforts, according to Boris Shustov, member of the Russian Academy of Sciences (RAS).

The system they’re considering would consist of orbital lasers aboard the ISS. It should be effective against the most common type of space debris around Earth — pieces that only measure a few centimeters.

The idea was first proposed by Japanese researchers back in 2015. The original project draft envisioned lasers using 10,000 optical fiber channels and would draw all of the ISS’s electrical output to work at full capacity, according to the team. That, understandably, isn’t a particularly attractive defensive system. The new project aims to provide the same power output by using 100 “thin rods” in lieu of the optical fibers. This would reduce the overall energy drain to only 5% of the ISS’s output — a twenty-fold decrease.

This version of the laser system would allow the ISS to fire laser bursts for 10 seconds, up to a range of 10 kilometers (6.2 miles), with a recharge time of 200 seconds, according to Russian media. The whole system would weigh about 500 kilograms (1,100 pounds).

It’s a small price to pay, considering the benefits such a system would provide. The ISS still has to make routine adjustments to its orbit to avoid collisions with pieces of man-made junk. These bits are parts of former rockets or spacecraft that have been broken up into small pieces through mutual collisions over the years, or from the effects of space radiation.

They’re quite small, going very fast, and can have disastrous consequences to the ISS’s structural integrity should they hit. There’s also a lot of them. NASA is currently tracking about 17,000 pieces about the size of your fist and half a million pieces roughly the size of a marble. According to their estimates, there are over 200 million pieces over one millimeter in size still floating in Earth’s orbit at speeds in excess of 17,500 mph (over 28.100 km/h).

An impact with any single one of those fragments could jeopardize the ISS and its crew.

But don’t get overly excited — Superman’s laser eyes are still a ways away. 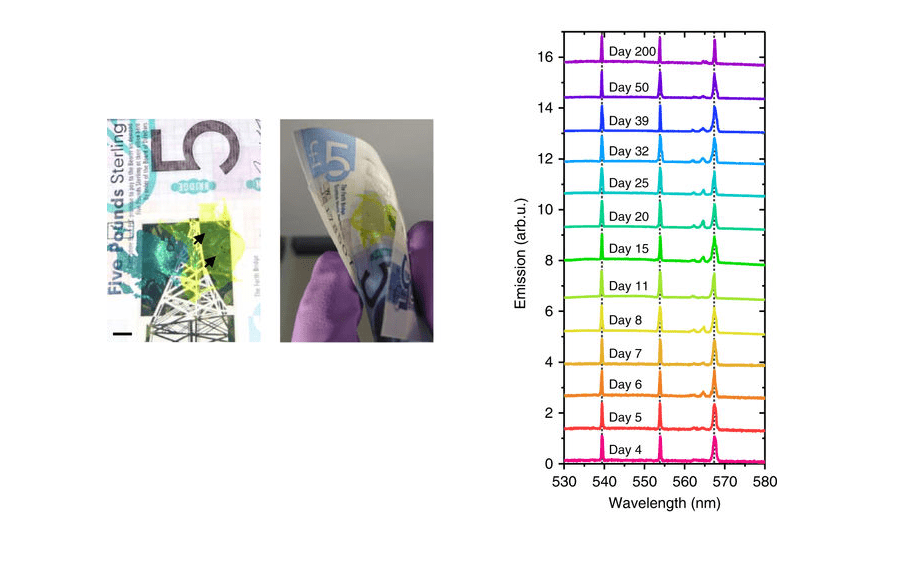 The membrane lasers could be implemented on eyes or as security features on banknotes. The right image shows that the spectra remained constant over a period of 200 days — in other words, it was quite stable. Image credits: Karl et al. 2018.

When you read about shooting lasers from your eyes, the first thing that inevitably comes to mind is destroying things. But in the scientific world, this ability (technically called ocular lasers) means something else entirely. Rather than fighting bad guys or causing needless destruction, scientists are focusing on using ocular lasers for security, biophotonics, and photomedicine.

Using a cow eye as a model, a team from the University of St. Andrews managed to create ocular lasers with a new type of ultra-thin membrane that uses organic semiconductors.

“In summary, we have demonstrated the fabrication and operation of ultra-thin, substrate-less organic lasers with extreme mechanical flexibility and lightweight,” researchers write in the study. “These physical properties combined with the low lasing threshold and the ability to generate unique output spectra allows the application of membrane lasers as security label that can be applied to a wide range of substrates including banknotes, contact lenses, and fingernails.”

Essentially, the thin laser could be attached to either an eye or a banknote (both of which were used for this study). The new design has the weight, thickness, and mechanical flexibility needed to attach the laser membrane to another object. Researchers report that when attached to another object, the optical properties didn’t change over the course of several months.

These lasers hold great promise for a number of applications — simple and accessible spectroscopy, data-communication, biosensing, and chemosensing for detecting explosives. The main advantage of this new technology is its sleek size and ease of use. Previous solutions were bulky, expensive, and difficult to maneuver.

“Our work represents a new milestone in laser development and, in particular, points the way to how lasers can be used in inherently soft and ductile environments, be it in wearable sensors or as an authentication feature on bank notes,” said Malte Gather, a co-author of the study and professor at the School of Physics and Astronomy at St. Andrews, in a statement.

While this sort of flexible biotechnology has developed dramatically over the recent years, don’t expect to find them in shops anytime soon — their place is still in the lab and not on the shelves. However, that may change in the not-so-distant future, and if that happens, I can’t wait for ocular lasers to hit the market.