Although not as famous as chameleons, caterpillars of the peppered moth (Biston betularia) are quite the masters of camouflage themselves. The insect not only resembles the shape of the twigs it rests on but also variably matches their color, ranging from a reddy brown to green. For more than a century, naturalists have tried to explain how these caterpillars manage to change color to blend in their environment. A new study may have finally unraveled the mystery, showing that the insects can “see” a twig’s color with their skin. 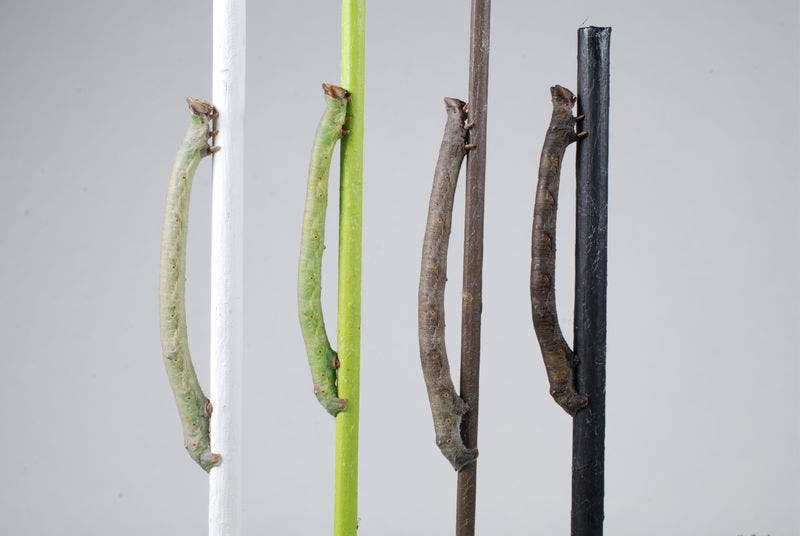 Caterpillars of the peppered moth can sense the color of twigs with their skin. Credit: Arjen van’t Hof, University of Liverpool.

Researchers at the Max Planck Institute for Chemical Ecology in Germany and Liverpool University in the UK conducted three experiments to solve the riddle of how caterpillars of the peppered moth perform their disguise. First, they wanted to see if eyesight was essential to the insects’ camouflage. S, they “blindfolded” several of them by painting their eyes over with black acrylic paint. These blindfolded caterpillars were placed on white, green, brown, and black branches. Remarkably, despite not being able to see, the insects were still able to change color in order to resemble their background to the same extent as individuals that didn’t have their eyes covered.

“It was completely surprising to me that blindfolded caterpillars are still able to pick a branch that best matches their color. I don’t think my supervisor, Ilik Saccheri, believed me until he saw it by himself”, said Amy Eacock, lead author of the new study and currently a postdoc at the Max Planck Institute for Chemical Ecology, said in a statement. 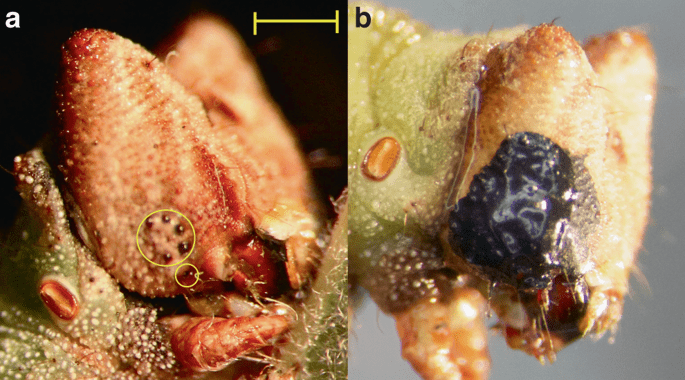 In a second experiment, the researchers analyzed how blindfolded caterpillars reacted to their environments. When allowed to move freely, the caterpillars consistently rested on the twig that most matched their own color.

While these two experiments convincingly offered evidence that the caterpillars of the peppered moth are capable of sensing the color of vegetation through other means other than eyesight, a third experiment showed how all of this is possible. The researchers examined where genes related to vision are expressed inside the insects’ bodies, finding them not only in the head, where the eyes rest, but also in the skin. One particular gene related to vision was expressed more in the skin than in the heads of the caterpillars. Writing in their journal Nature Communications, the authors believe that it is this gene that may be largely responsible for the caterpillars’ surprising color-perception by the skin.

Finally, the researchers performed a computational model of visual perception to quantify larval color and luminance as it would be perceived by a visually hunting avian predator, the blue tit. The results suggest that there’s no difference in how birds see blindfolded and unblindfolded caterpillars.

“We constructed a computer model that can ‘see’ the same way birds do, so we are able to conclude that these adaptations – color change, twig-mimicking, behavioral background-matching – likely evolved to avoid visual detection by predators,” Amy Eacock said.

Cristiano Menezes of the Brazilian Agricultural Research Corporation has discovered farming behaviors in bees, adding them to the list of social insects that practice agriculture.

Up to now, these black-and-gold balls of fluff were believed to rely solely on pollen and nectar for sustenance. However, a particular species, Scaptotrigona depilis — the Brazilian stingless bee — has been observed growing fungus to be fed to their larvae. Menezes says that if other species that rely on fungi for survival are found, there will be some serious concerns about using fungicides in agriculture.

He was studying the bees in the lab, when he found what the believed to be fungus contamination in their hives. But, looking at all 30 hives he had collected as specimens, he found it in each and every one. Even more suspiciously, it was growing inside brood cells — the structures that house a hive’s developing larvae. Hmm. 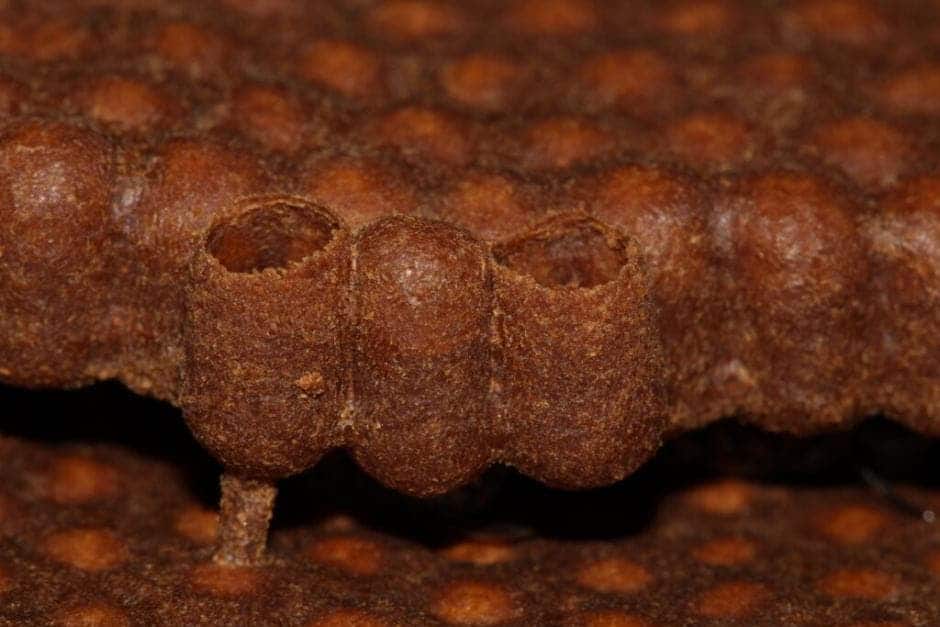 Taking a closer look at the presumed contaminant, Menezes began intuiting that maybe it wasn’t the fungi living off the bees, but the other way around. And indeed, it’s a keystone element of the hive — it permeates the cerumen, the waxy material bees build their stuff out off. After the bees lay an egg in each cell, and regurgitate food for the larva, the fungus starts growing from the cerumen into the cell. When the egg hatches, the larva feeds on the fungus, and it can’t feed on anything else. When the team tried to grow bees on a fungus-free diet, the survival rate of larvae dropped immensely, from 72 to only 8 percent.

“The survival difference may be either due to some nutrients provided by the fungus, or due to the fungus protecting the regurgitated food from spoiling,” the team reports.

When the bees leave their hive to start a new colony, they take some cerumen with them, so “seed” their new brood cells, proving that the bees understand and utilize the fungal agent.

“It is clear that the fungus profits from dispersal with the bees, both to new colonies and within the nest, and is offered a protected environment,” says Duur Aanen of Wageningen University in the Netherlands.

Menezes calls it “proto-farming” — the bees show some agricultural behaviours, such as “planting” the fungus, and providing stable conditions and nutrients for it to grow, then harvest it, but don’t actively tend to it. These behaviors are seen in other social insects as well, such as ants or termites — one species of ants was reported to even farm animals for meat.

“It is an exciting example of the complex connections between insects and microscopic life,” says Cameron Currie of the University of Wisconsin. “And it illustrates the important roles for beneficial symbionts in insects.”

Both Menezes and Currie think there are more farming bees to be found.

“Given the substantial diversity of bees, many of which are poorly studied, it is likely that other bees engage in similar associations,” Currie says.

This raises concern about the use of fungicides, which while not directly harmful to bees, may be affecting them by killing off their symbiotic fungi, Menezes’s team concludes.

Fungus gnats (Bradysia species) – also known as dark-winged fungus gnats, are small, mosquito-like insects often found in homes and offices, usually in the vicinity of houseplants. The larvae that hatch are legless, with white or transparent bodies and shiny black heads. From the first glimpse you’ll notice they’re not the prettiest sight, but what they lack in looks, they make up in cleverness.

The fungus gnat larvae are incredibly vulnerable when alone; they’re puny, non-poisonous and practically at the mercy of predators – basically anything larger than them. To survive, the larvae have adapted a group behavior in which they join together by the hundreds to form a slimy, moving mass. The video embedded in this post illustrates this behavior. At first, you might be fooled to think you’re watching a snake (a two-headed snake?), but once the video zooms in all hell breaks loose.

While this instance of fungus gnat larvae behavior is very clever (or grouse), they’re consider serious pests and can cause severe damage to both houseplants and commercial crops. Some fungus gnat larvae are known for their propensity to feed on the roots and lower stem tissues of plants. These feeding habits stunt and might kill affected plants. 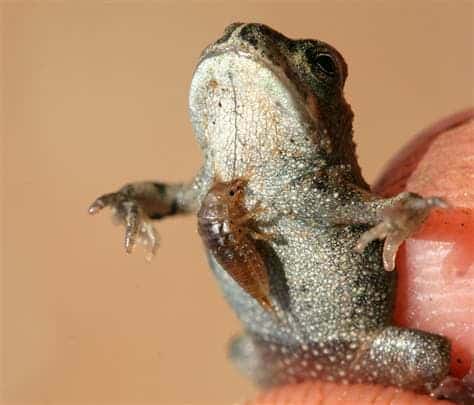 A beetle larva attached to the chest of an amphibian. (c) Gil Wizen / AFTAU

In a classic David vs Goliath scenario, scientists have observed how the Epomis beetle larvae simply devour frogs, several times larger than the larvae. Thus the pray has become the predator, and vice versa, as the initial predatory frog finds itself sucked out of his lifeline by the larvae until nothing by a sac of bones remain.

It’s a truly freaky turn of events, but which by no means can be considered accidental or isolated – on the contrary. In what can only be considered a very tricky evolutionary maneuver, squirmy larvae cunningly attract frogs or toads by posing as dead meat, wiggling its antennae and jaws in an enticing pattern. These movements become more intensive as the would be predator approaches – like a dance. Whose the hypnotoad now?

Enticed by this ‘siren call’, before the amphibian can get a clue of whatever’s happened, the beetle larvae suddenly eludes its predator and attaches on to the nearest surface of the frog’s body. From there on it starts sucking and draining. In some rare cases, frogs actually manage to swallow the larvae, only to regurgitate them out after a short while, time in which the larvae takes another swing and actually kills the frog.

In one “extraordinary” case, wrote Tel-Aviv University study researchers Gil Wizen and Avital Gasith, a larva survived in the stomach of an amphibian for two hours before the larger animal vomited it back up.

The following video has been produced by Tel Aviv researchers, who recorded a live beetle larvae-frog encounter. It’s kinda graphic, so click at your own risk.

Frogs, hopeless in front of the larvae

Generally, ground beetles are a tasty, easy pray for frogs and toads, but for some time now researchers have noticed that the larvae of some species of ground beetles can be terribly ruthless on their own terms. To better observe this behavior in a controlled environment, researchers collected the larvae of two ground beetle species, E. circumscriptus and E. dejeani, and placed them in containers with a variety of frog and toad species.

There were 382 separate tests, and on each account the amphibian turned out dead. Only seven frogs and toads managed to swallow the larvae, but in each case, the amphibian quickly threw up its would-be meal. The regurgitated larvae quickly rallied and attached themselves to the amphibians’ mouths. At an 100% fatality rate, the beetle larvae are some mean, deadly critters.

“This study started as a side-study while checking the population status of toads in the coastal plain of Israel,” said Wizen who worked on the research in the lab of Avital Gasith at Tel-Aviv University. The phenomenon was first discovered in 2005 by Eldad Elron and Alex Shlagman.

“In Israel there are only six amphibian species and all of them are threatened by extinction,” he said.

The research was published Sept. 21 in the online edition of PLoS ONE.