Sticking to a workout routine is never easy. Music, a new study concludes, can be an important ally.

Everyone has their own workout routine. Some just do it in isolation, others prefer being in a crowded room where everyone is doing their thing. Some like it loud, some prefer the quiet. For many people, music has become an integral part of working out.

It’s not hard to understand why. As the body is being pushed, the mind can easily wander off. Music can keep the mind entertained and distracted from the hard work the body is doing. That’s why you hear loud music in most gyms, and why you often see people jogging with headphones.

Previous studies have also documented that music can help distract from the fatigue and discomfort caused by exercise. However, different people see music in different ways — some like intense beats, others would prefer a soothing tune. How we perceive music is also influenced by culture, as well as personal preference. Everyone has their own preferred genres, and it’s not exactly clear what type of music (if any) works best during exercise.

A new study wanted to assess how beneficial music can be in high intensity and endurance exercise. The study analyzed the effect of the tempo of a piece of music on female volunteers who were either walking on a treadmill (endurance exercise) or using a leg press (high-intensity exercise).

The volunteers carried out two workout sessions, completing the exercise either in silence or while listening to pop music at different tempos. The researchers monitored several physical parameters of the volunteers, as well as their opinions about how hard the exercise was.

“We found that listening to high-tempo music while exercising resulted in the highest heart rate and lowest perceived exertion compared with not listening to music,” explained Professor Luca P. Ardigò of the University of Verona in Italy. “This means that the exercise seemed like less effort, but it was more beneficial in terms of enhancing physical fitness.”

The effects were strongest in participants listening to high-tempo music (170 – 190 bpm) while doing endurance exercises, suggesting that people performing endurance activities such as walking or running may reap the largest benefits from listening to intense music.

However, the study also features significant limitations. There were only 19 participants, not nearly enough to establish statistical relevance. In addition, all participants were young women (under 30), doing a specific type of exercise.

Nevertheless, it’s a good indication that at least in some scenarios, music might be an important aid when exercising.

In future research, the team will also investigate the effects of different types of music genres, melodies, or lyrics. Music is complex and multifaceted, and it’s not clear how all these different elements contribute to the experience that helps you when exercising.

The study was published in the journal Frontiers in Psychology.

You can’t run away from your problems — unless, it turns out, that problem is death.

Any amount of running is linked to a significantly lower risk of death from any cause, a new metastudy on the subject reports. If more people took up running, the authors add, we could see substantial improvements in population health and longevity.

That physical exercise is good for you isn’t exactly news. However, the exact details on running are a bit fuzzy. The full extent of its benefits on our health is not exactly clear, even if we know that it does protect us from cardiovascular diseases, for example. It’s not clear how much a person should run to see the potential benefits, or whether running more frequently, for longer, or at a certain pace brings certain benefits over other styles of running.

In a bid to find out, the team performed a systematic review of all relevant published studies, conference presentations, doctoral theses, and dissertations. The team was on the lookout for research into the link between running, jogging, and the risk of death from all causes, cardiovascular disease, and cancer.

The team further explains that even casual running — for example once per week or less, lasting less than 50 minutes each time, even at speeds under 6 mi (8 km) an hour — was still associated with significant health benefits and longevity. That’s 25 minutes less than the recommended weekly amount of vigorous exercise.

All in all, this suggests running is a very good option for people whose main obstacle to exercising is a lack of time. On the flip side, however, the team reports that more running (above the threshold mentioned above) didn’t lead to greater reductions in the risk of death from any cause.

“Increased rates of participation in running, regardless of its dose, would probably lead to substantial improvements in population health and longevity,” the study concludes

The paper “Systematic review: Is running associated with a lower risk of all-cause cardiovascular and cancer mortality, and is the more the better? A systematic review and meta-analysis” has been published in the British Journal of Sports Medicine. 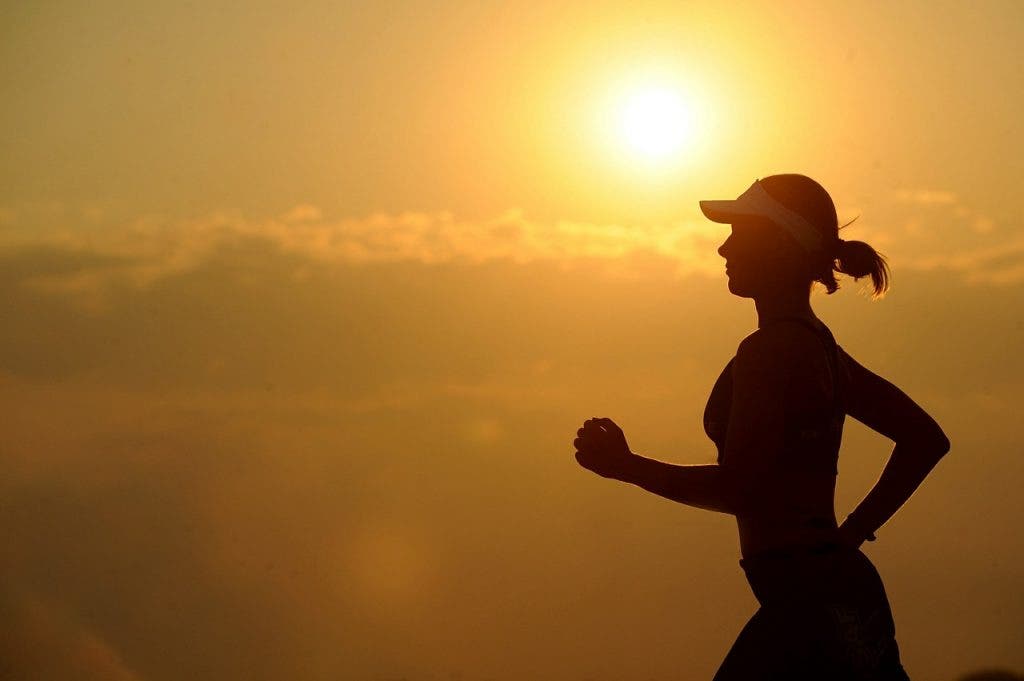 The sight of the determined, lycra-clad jogger has become a familiar feature of urban parks around the world. Jogging – defined as “the activity of running at a steady, gentle pace” – was made popular by running pioneer Arthur Lydiard, who realised that this was a better way to train for competition than sprinting to exhaustion. Jogging gained a huge following in the 1980s, and has recently experienced something of a resurgence.

There are clear health benefits to this relatively cheap and accessible activity. The Copenhagen City Heart study – which collected data between 1976 and 2003 – revealed that regular jogging increases the life expectancy of men by 6.2 years, and women by 5.6 years.

Peter Schnohr, chief cardiologist of the study, found that jogging improves oxygen intake and heart function, reduces blood pressure and inflammation markers, increases insulin sensitivity and bone density, and helps to prevent obesity and blood clots, among many other things.

So, how much jogging do you have to do to gain this bounty of benefits? The Copenhagen City Heart study itself recommends between 60 and 150 minutes per week, in total. The UK’s National Health Service (NHS) likewise suggests that 19- to 64-year-olds should be doing 150 minutes of moderate aerobic exercise each week – where aerobic exercise is a workout which you can maintain for relatively long periods, without too much impact on your breathing rate.

These benefits are maximised by jogging for more than 20 minutes, at least three to five times per week. But, based on my own experience as a competitive runner and coach, there are a few other tricks you can use to get the most out of your regular jog.

Everybody runs differently, so your technique is going to be unique. Even so, there are a few key pointers that may help. The UK Athletics resource UCoach recommends running tall, with high hips, and placing each foot directly beneath your centre of mass keeping your arm action relaxed and efficient, with rhythmical stride. Within the first ten weeks, new joggers should expect to see their movement become more efficient, and their running gait improve.

Going to a specialist running store is very useful – they should be able to give you feedback and advice on your current running shoes, your technique and what extra support you require. This can make a big difference when it comes to preventing injuries; something all runners are trying to achieve.

Keep in mind, however, that the most expensive shoes might not be the best – in fact, it’s probably more important to make sure they are comfortable.

Setting goals is proven to give you the motivation you need to get started, and to continue training. These may include personal goals to get fit and lose weight, or you may aim to complete an event like a 5km, 10km or half or full marathon. Remember, any goal is a great tool – but you may simply enjoy jogging – that’s fine, too.

Mixing up your jogging routes and venues is key to beating off potential boredom. So, make sure not all your jogs are over the same distance and on the same loop. You can’t beat a new trail for a longer jog, just make sure you know where you are going – or you may be running for longer than you anticipated.

Jogging with others is a great way to be social and also go longer and further. The rise of the Parkrun is a global phenomenon that gets many thousands of people each week running, jogging and walking over a 5km distance. There are many Parkruns spread all over the UK. It is free to enter, and they happen every Saturday morning at 9am in many urban parks.

6. Smarten up your jog

This is jogging for the new age. There are numerous smartphone apps and trackers that will monitor and motivate you. They will measure your routes, give you split times and show your progression. You can do virtual jogs with your friends, have mini competitions and even have real-time online coaching support from trained professionals.

There are even apps that will create a music playlist with beats to match your steps per minute. Research tells us that synchronised music increases exercise output, and helps to reduce the perceived effort of jogging.

Jogging is an accessible urban sport – it’s also smart, sociable and healthy. It isn’t a surprise that jogging has made a comeback. So, put on your trainers, grab your smartphone, go for a jog and live longer.

This article was originally published on The Conversation. Read the original article.

Changing bad habits into good ones can be quite a challenge, but having a partner that does the same goes a long way. A new study has found that if your partner works out and quits smoking, then you are much more likely to do the same thing.

Encouragement and support go a long way – and collaborating in a team is one of the main characteristics of our species, so it’s only normal that teaming up makes things easier. Researchers at the University College London found that both men and women worked out more if their partners joined them, and the same thing goes for losing weight.

Researchers turned to the English Longitudinal Study of Ageing and examined the smoking habits, workout patterns and weight loss of 3,722 married and cohabiting English couples over 50 years old. The figures are striking – only 8% of those partnered with smokers quit smoking, but that number jumped to 50% when the partner also quit. A similar pattern emerged for physical activity, with a whopping 70 percent of people exercising when their partner did the same!

When it came to actually losing weight, the figures weren’t so spectacular, though they were still highly relevant. Researchers looked at how many people lost 5% of their body weight – a significant figure. They found that a quarter of all men lost weight when their partners did the same, with only 10% doing it alone. For women, those figures were 36% and 15% respectively.

It’s not clear yet why this happens, and this was not the purpose of the study.

“Of course we weren’t studying ‘why,’ only ‘whether’, but I would speculate that social support and sharing the problem would be good,” Jane Wardle of University College London said. “Maybe there might also be an element of competition.”

What was very interesting is that the patterns weren’t so strong when people got involved with already healthier people – it worked much better when both partners were working to solve problems.

Wardle also mentioned that the same trends probably continue to same sex relationships and marriages, but the numbers they had available for this statistic was to small to have any meaning.

The study also indicates that if one of the partners needs to lose weight and quit smoking, his partner can directly help him by doing the same.

“I would certainly recommend doctors to enquire if their patient’s partner ought to be quitting smoking, getting more active, or losing some weight, and if so talk to the patient about whether the two of them might take the change up together,” she said.