Researchers have just uncovered one of the largest stashes of Iron Age weapons ever discovered in Germany. Around 100 different artifacts have been recovered from the site.

The advent of the Iron Age was an important stepping stone in our technological history. It was marked, quite unsurprisingly, by the introduction of iron as a material for tools and weapons. Iron-carbon alloys (what we refer to as ‘iron’) generally have similar properties to properly processed bronze (the metal it replaced), but iron has the huge advantages of being more abundant and simpler to produce, while having the downsides of requiring higher temperatures and more complex ore processing techniques.

At first, the use of it was quite limited, but as the know-how of smelting iron spread, so did its use. In Germany, the (early) Iron Age spanned between 800 to 45 BC, followed by the late Iron Age up until 1 BC, when the area became a Roman province. It was probably during the fighting for this transition that the stash was deposited at the site.

Stashed for a rainy day

The site is close to the German city of Schmallenberg, on the top of mount Wilzenberg. A press release by the Westfalen-Lippe Landscape Association, which made the discovery, explains that around 100 Celtic Iron Age artifacts were unearthed here.

This isn’t the first time the Wilzenberg site attracts academic interest. Work has been ongoing here ever since the 1950s. Prior digs have revealed a series of features suggesting that the site served as a hill fort back in the day, most notably ramparts. But there were some artifacts recovered over this time, as well.

Hillforts were relatively small fortifications made of local materials — from stone or wood to clay or soil — that were meant to discourage foreign incursions, or slow them down enough for a response to be mustered; hence, the ramparts. And, according to the findings, the Wilzenberg site also served as a weapon stash, most likely for locals or the soldiers manning the fort.

What prompted the discovery was the association’s use of metal detector devices to search for iron artifacts hidden beneath the structure’s former floor. Around 100 spears, swords, lance tips, belt hooks, and iron harness elements were discovered. Although dating them directly with sufficient accuracy proved impossible, the team explains that context cues would place the artifacts somewhere between the years 300 and 1 BC.

What was really peculiar about the finding is the condition the weapons here were uncovered in. Most of the swords here were severely damaged or deformed, being bent into halves or thirds, for example. Both the spears and lance tips were blunted. The team explains that the sheer scale of the damage seen here suggests this was an intentional, sustained effort. It was most likely carried out following a battle, as the victorious army wanted to prevent these weapons from being used again.

It’s also important to note that the weapons and artifacts were found piled up, not spread around, which indicates that they were carried to and deposited on the site. This suggests that the battle was fought elsewhere, and the weapons were then recovered, transported to Wilzenberg, damaged, and deposited here.

It’s very likely that the battle occurred around the city of Wilzenberg, and that the winners took these items as their trophy.

The original press release (in German) is available here.

University of Leicester archaeologists have recovered a collection of rare Iron Age metal artifacts from a site in Glenfield Park, Leicestershire, England. Among the objects are decorated cauldrons, a complete sword, and a brooch from the 3rd century BC. 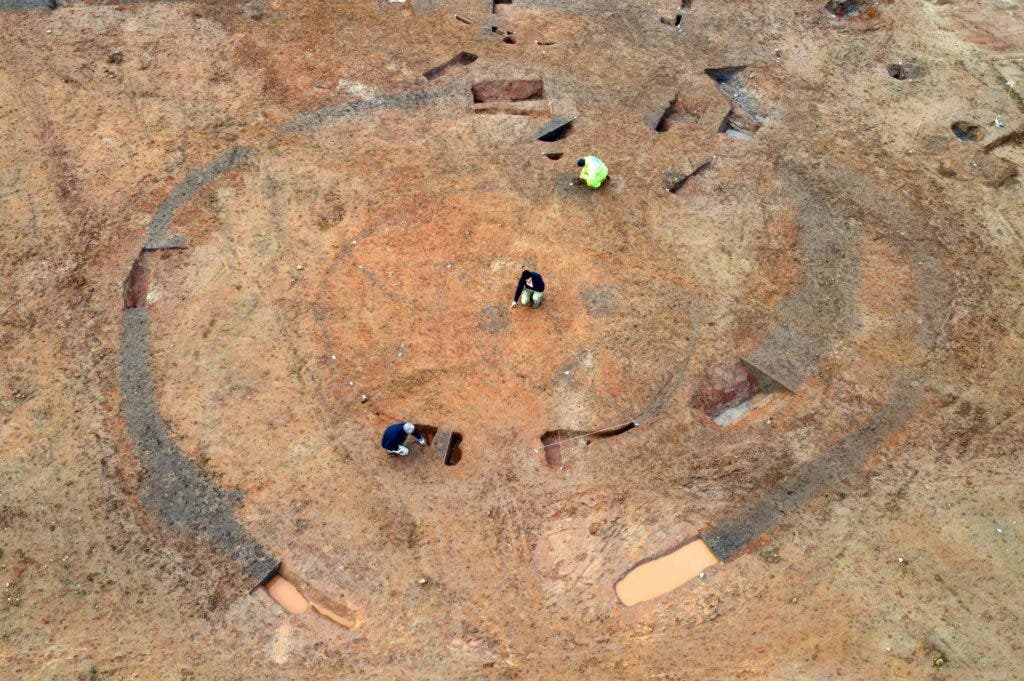 The collection includes eleven cauldrons, several fine-crafted ring-headed dress pins, an involuted brooch and a cast copper-alloy ‘horn-cap’, likely a part of a ceremonial staff, archaeologists say. The objects were inhumed at the site in a series of events that took part over a considerable span of time, they add, resulting in multiple episodes of sediment deposition across the settlement.

“Glenfield Park is an exceptional archaeological site, with a fantastic array of finds that highlight this as one of the more important discoveries of recent years,” said Dr. John Thomas, director of the excavation and project officer from the University of Leicester Archaeological Services.

Dr. Thomas explains that human occupation in the area during the middle Iron Age (5th to 4th centuries BC) was “modest”, consisting of a small settlement with no walls on the south-facing slopes of the spur. Some time later, around the 4th to 3rd centuries BC according to current radiocarbon dating results, the site underwent major changes. Individual roadhouses were enclosed, “there was far more evidence for material culture”, and the inhabitants adopted rituals and rites that seem to involve “deliberate burial of a striking assemblage of metalwork.”

That metalwork is what truly sets the site apart, Dr. Thomas says. Not only is it found in much larger quantities than in other known comparable sites in the area, the items are also of much higher quality and the composition of the artifacts is also unique.

“The cauldron assemblage in particular makes this a nationally important discovery,” Dr. Thomas said. “They represent the most northerly discovery of such objects on mainland Britain and the only find of this type of cauldron in the East Midlands.”

The team reports that the cauldrons appear to have been placed in a large circular enclosure ditch that surrounded a building. It’s not known why yet, but it’s very likely that this was a deliberate choice, not an accident, the archaeologists add. The cauldrons had been placed either upright or inverted, after which the ditch was filled in. One hypothesis is that this burial was meant to mark an end to the activities carried out at this part of the site. Other cauldrons were found buried across the site, suggesting that these rituals were used to mark significant events over a long period of time as the settlement developed.

They are fashioned from several distinct parts — iron for the rims, upper bands, and the ring handles attached to them, copper alloy for the body. Size-wise, they range between 14.2 and 22 inches (36-56 cm) in diameter, with the summed-up capacity of all cauldrons around 550 liters. This volume is quite significant, and the team suspects that they may have been used to provide food for large groups of people, for example at gatherings held in the site for the area’s wider Iron Age community.

CT scans performed on the cauldrons show evidence of wear, tear, and repair, pointing to long-term and repeated use of the objects. The amount of care and effort that went into repairing them further reinforces the hypothesis that the cauldrons were special for the Iron Age community at Glenfield Park.

“Due to their large capacity it is thought that Iron Age cauldrons were reserved for special occasions and would have been important social objects, forming the centerpiece of major feasts, perhaps in association with large gatherings and events,” Dr. Thomas said.

“They are rarely found in large numbers and, with the exception of a discovery in Chiseldon, where 17 cauldrons were found in a pit, there have been few excavated examples in recent years.”

Dr. Thomas adds that cauldrons held a symbolic value in the area at the time, as evidenced by their frequent appearance in early-medieval Irish and Welsh literature.