French scientist working with Hall thrusters — an advanced type of engine that harnesses a stream of plasma to generate forward momentum — have recently figured out a way to optimize these drives, allowing them to run on a staggering (wait for it) 100 million times less fuel than conventional chemical rockets. Their work has been published in Applied Physics Letters. 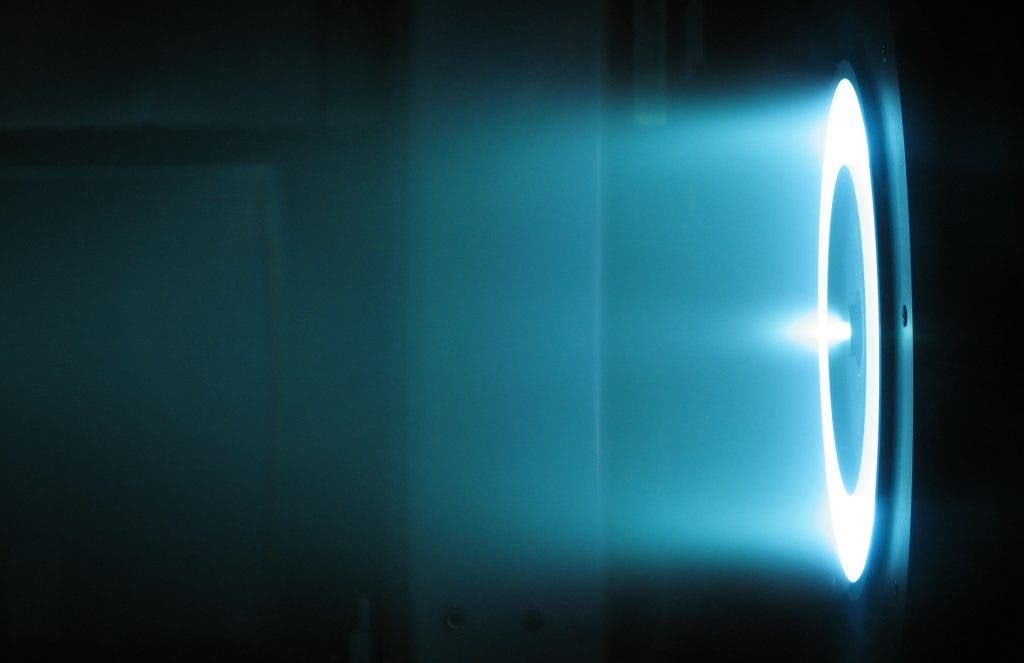 They work just like regular ion thrusters, blasting a stream of charged ions from an anode ( + charge) to a cathode ( – charge). They are pulled by magnetism towards the back of the ship and then pushed by magnetic repulsion out of the ship, propelling the craft forwards. The technology isn’t new: such engines have been in operation since 1971, and are now routinely employed on satellites and space probes to adjust their orbit when needed. They are ideal for space use, and scientists plan to use them to get humans to Mars…there’s only one small problem: the lifespan of current Hall thrusters clocks in at a maximum of 10,000 operational hours, way too short for any space exploration mission.

This is because, unlike traditional ion drives, Hall thrusters do not have a physical cathode: they utilize a magnetic field and a trapped electron cloud that serve as a hollow, “virtual” cathode. A charged ion stream is produced by injecting xenon, these heavier atoms capable of passing unimpeded through the magnetic field and are subsequently neutralized. This creates a relatively low-pressure discharge, but in the void of space it’s powerful enough to provide thrust in the opposite direction of the flow of ions.

And this is the Achilles’s heel of the drive: the components that make up the anode, virtual cathode and electron cloud. This container, the discharge channel wall, is constantly being bombarded by high-energy ions, wearing it down so much that the part requires constant repairs or even replacing to allow the drive to function.

So, researchers from the French National Center for Scientific Research, presumably with a roar of “for science!” took the wall out of the device altogether:

“An effective approach to avoid the interaction between the plasma and the discharge channel wall is to move the ionisation and acceleration regions outside the cavity, which is an unconventional design named a Wall-Less Hall Thruster,” said lead researcher, Julien Vaudolon.

The two prototypes of the Wall-Less Hall thruster.
Image via sciencealert

It’s not all roses however, as Esther Inglis Arkell explains for Gizmodo:

“The red anode should be lined up on the wall emitting xenon. Instead, it’s in the magnetic field, allowing electrons to glom onto it, reducing performance,” she says, referring to the device on the left in the above image, which was a total failure.

“The new design [on the right] makes the small change, which allows the anode to keep clear of the field. This one seems to work.”

Since the engine uses so little fuel compared to chemical drives, it frees up a lot of room in spacecrafts — meaning more cargo can be transported, or more passengers.

This frees up valuable space that we need for the long-run, deep space missions required to transport people and supplies to other planets, such as Mars. All that remains is for scientists to measure how much this approach extends the operational lifespan of the Hall thrusters, since at least 50.000 hours reliability is required to reach the red planet.

A huge plasma eruption that took place on the Sun has caused a “solar tsunami” of ionized atoms that are on a course for our planet on Tuesday night. Nothing to be too alarmed here, except for the disruption of some satellites.

It will however generate quite a show, a rare and unpredictable one too.

“It’s the first major Earth-directed eruption in quite some time,” Leon Golub of the Harvard-Smithsonian Center for Astrophysics told Space.com

NASA’s Solar Dynamics Observatory was launched in February, with the goal of looking into the Sun and figuring out how phenomena such as this work. The best show will be in North America, and it could also trigger some aurorae, which will make it even more awesome. Be sure to keep an eye on the sky tonight.