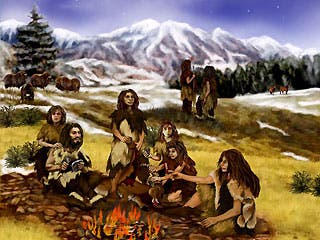 There has been a long standing debate regarding the Neanderthal people, and what kind of legacy we carry from them. Recently, a study conducted by an international team of researchers led by Damian Labuda of the Department of Pediatrics at the University of Montreal and the CHU Sainte-Justine Research Center showed that a part of the human X chromosome originating from Neanderhtals is found only in people outside Africa.

“This confirms recent findings suggesting that the two populations interbred,” says Dr. Labuda. His team places the timing of such intimate contacts and/or family ties early on, probably at the crossroads of the Middle East.

The Neanderthal’s ancestors left Africa some 400.000 – 800.000 years old, and moved to Europe, mostly concentrated in areas in France, Germany, Russia. However, modern humans left Africa only 50.000 – 80.000 years old. But the biggest question which remained on everyone’s lips was whether the Neanderthals, which were bigger, more powerful, and seemingly better adapted could interbred with modern humans, or were just a totally different species alltogether. The response is quite clear now – the two populations lived in a close association to each other, and could interbred. If this was common practice or if it was just occasionally is still unclear.

Dr. Labuda and his team almost a decade ago had identified a piece of DNA (called a haplotype) in the human X chromosome that seemed different and whose origins they questioned. When the Neanderthal genome was sequenced in 2010, they quickly compared 6000 chromosomes from all parts of the world to the Neanderthal haplotype.

Indeed, it could be this genetic injection that helped mankind evolve and go past the evolutionary bottleneck that Neanderthals were unable to overcome.

“Variability is very important for long-term survival of a species,” says Dr. Labuda.