A healthy environment at home goes a long way towards improving your well-being. The NASA Clean Air Study identified several species of plants that are effective in scrubbing your home’s air of nasty chemicals.

Compounds including benzene, formaldehyde, trichloroethylene, xylene, and ammonia float about in the air around you, released by aging adhesives, fire proofing, car exhaust, and the list goes on. These chemicals have been linked to negative health effects — headaches, dizziness, eye irritation, and others.

So how can you scrub these nasties out of your air? Well, a NASA study led by B. C. Wolverton some 27 years ago found that The Florist’s Mum and Peace Lily are the strongest choices for the job. Following the study, the agency also recommends you have at least one plant per 100 square feet (10 square meters). Although the research technically classifies as “old” (and further research has been done on the subject, as we detail here) it still remains one of the most inclusive and accurate works on the issue.

The guys over at Lovethegarden.com have luckily framed the findings of the study in a handy inforgraphic format. Ah, the wonders of modern technology.

So enjoy, and next time you’re looking for a potted friend to bring back home, consider consulting this guide.

Do you know what the infrastructure of the future is? It’s not roads or rockets, it’s information. Everything from medicine to city planning to education will be based on data, which means we’ll become increasingly reliant on computers to make sense of it all — as if computers weren’t prevalent enough. But just because they’re so ubiquitous, doesn’t mean they’re less amazing. We use them on a daily basis, either to keep in touch with friends, work on amazing projects or have fun. Yet, we have to understand that like all technological achievements, for instance, space flight, the culmination we see today is the result of a long scientific journey which began a long time ago.

In the case of computer science, you can say that this started when Calculus was invented, but that would be stretching it too far. The dots really started to connect around the 18th century when the first mentions of “digital” were made and the first tentative algorithms were published. The rest is binary history, and this beautiful infographic has the gist.

Let’s face it — we haven’t taken care of this planet as we should have. In fact, humanity’s relatively brief stint on Earth resembles a nasty viral infection, and sooner or later Earth might say ‘enough’s enough’ and cleanse us. But there’s still hope and a bit of time left to redeem ourselves. This infographic has the inside scoop of where the environment stands today and how much of its deprecated state is owed to human action, but also a quick action plan on how to amend our relationship with Mother Earth.

Despite research on lysergic acid diethylamide (LSD) in the ’60s showed great promise in treating psychological disorders, the substance was banned by the U.S. government under the Nixon administration and later by the whole world. Not only was it banned, it was designated as Schedule 1 substance, up there with heroin and cocaine.

Few drugs have had a more undeserving bad rep as LSD, but acid is finally making a comeback, it seems. Last year, researchers made the first LSD study in 40 years, confirming its potential  medical benefits in treating anxiety, depression and addiction. Then, another group made the first brain scans ever of subjects who had taken a dose of the acid. They found “the brain functions less like a compartmentalized entity and more like a whole, very much akin to how the brain of a baby works.”

“In many ways, the brain in the LSD state resembles the state our brains were in when we were infants: free and unconstrained,” said Robin Cahart-Harris, who led the study. “This also makes sense when we consider the hyper-emotional and imaginative nature of an infant’s mind.”

As governments become more lenient with LSD research, its undeniable therapeutic potential will be made clearer. Scores of people battling with depression and addiction might then one day finally find a tool to face their demons.

Dog — man’s best friend. Well, no one doubts dogs are very loyal and the best friends a taker can ever hope for. But what about you? Since you’re supposedly friends with dogs, you should know a thing or two about them. How many of these can you check off?

Share some other science facts about dogs that you know of in the comments. Oh, and remember, easy on the hugs. M’kay?

In 2009, the National Highway Traffic Safety Administration reported that 4,092 pedestrians were killed in crashes with motor vehicles and 59,000 were injured. These numbers represent a 22 percent drop from 1998. However, an unknown number of pedestrian crashes requiring emergency room treatment are not included in these reported fatalities and injuries because they did not occur in a public roadway (i.e., crash occurred in a parking lot or driveway). Some of these fatalities are caused by both driver and pedestrian negligence. Drivers have a duty to operate their vehicles in a reasonably safe manner to avoid injury to others. This includes keeping an eye out for pedestrians and properly yielding when necessary. But that doesn’t mean pedestrians can’t be extra careful and avoid an accident even when poor driving is involved. Here are some sound tips aimed at kids, but which parents should take heed also.

Brought to you by:SafeKids.org | Open in a New Window

Around 80,000 people around the world answered a questionnaire that gauged what they valued most in life. Their responses were centralized and normalized by the OECD Better Life Index, and used to design an infographic. Labeled over each of the 180 countries, you can see what’s the dominant life priority of the population.

The happiest countries in the world can be found in South America, according to a previous poll run by Gallup. On the opposite side, United States residents are among the most miserable, scored the same as Uzbekistan and Kenya. It’s not all about the wealth, apparently. In the OECD infographic for instance, the dominant life priority is “life satisfaction”. Most people in South America, however, rate “education” as a top priority. 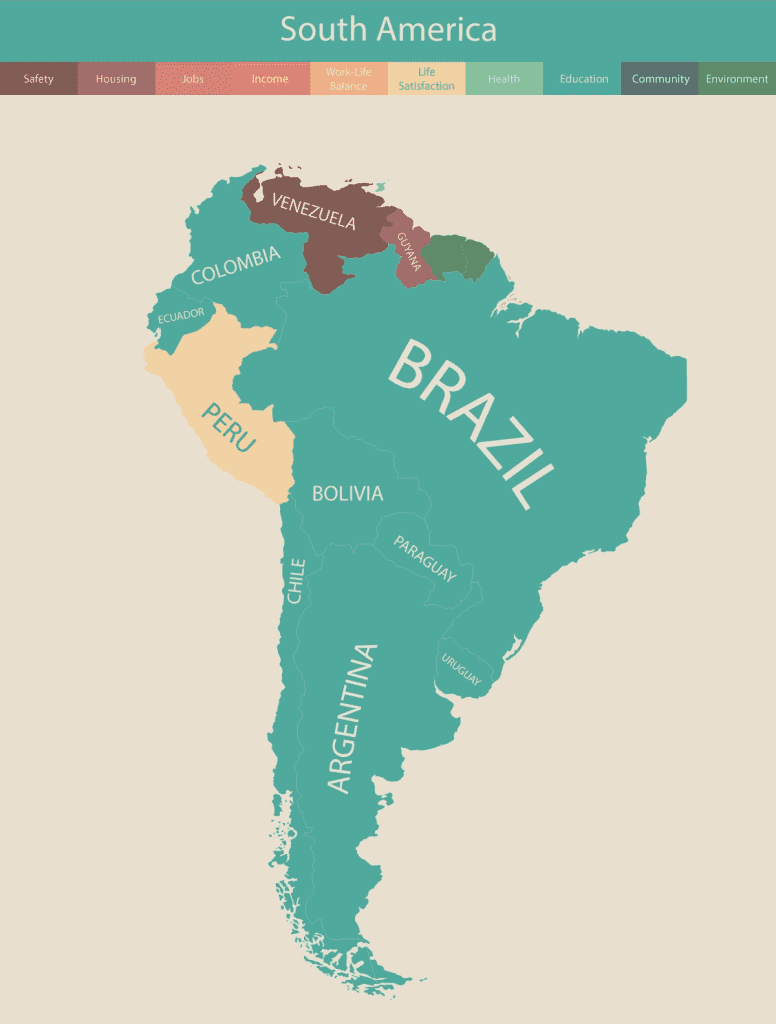 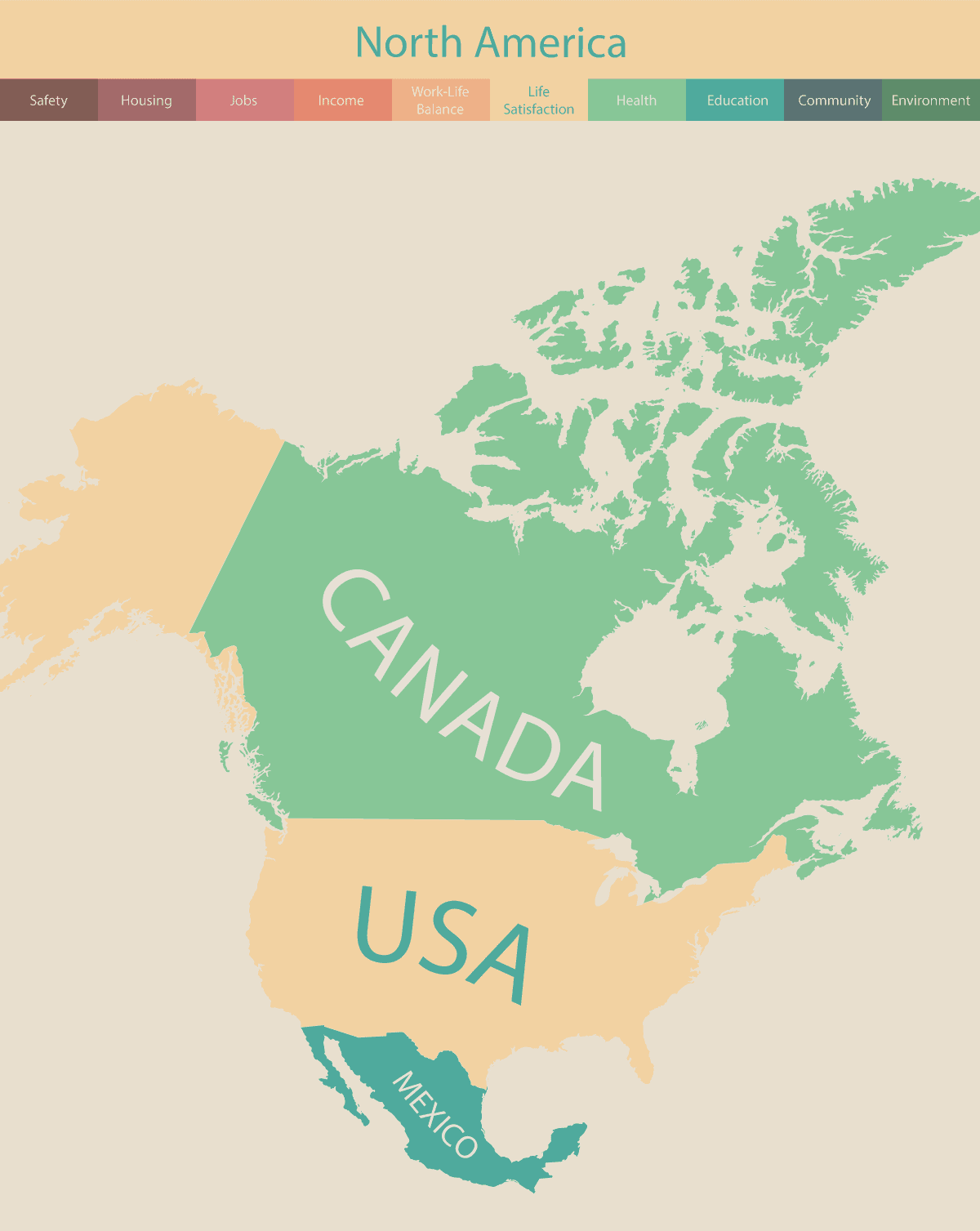 In Europe, priorities seem to be mixed. Central Europe wants “life satisfaction”, Western Europe holds “health” as the prime goal, while the poorest countries in the area, war struck Ukraine or Albania, think “income” matters the most to them. 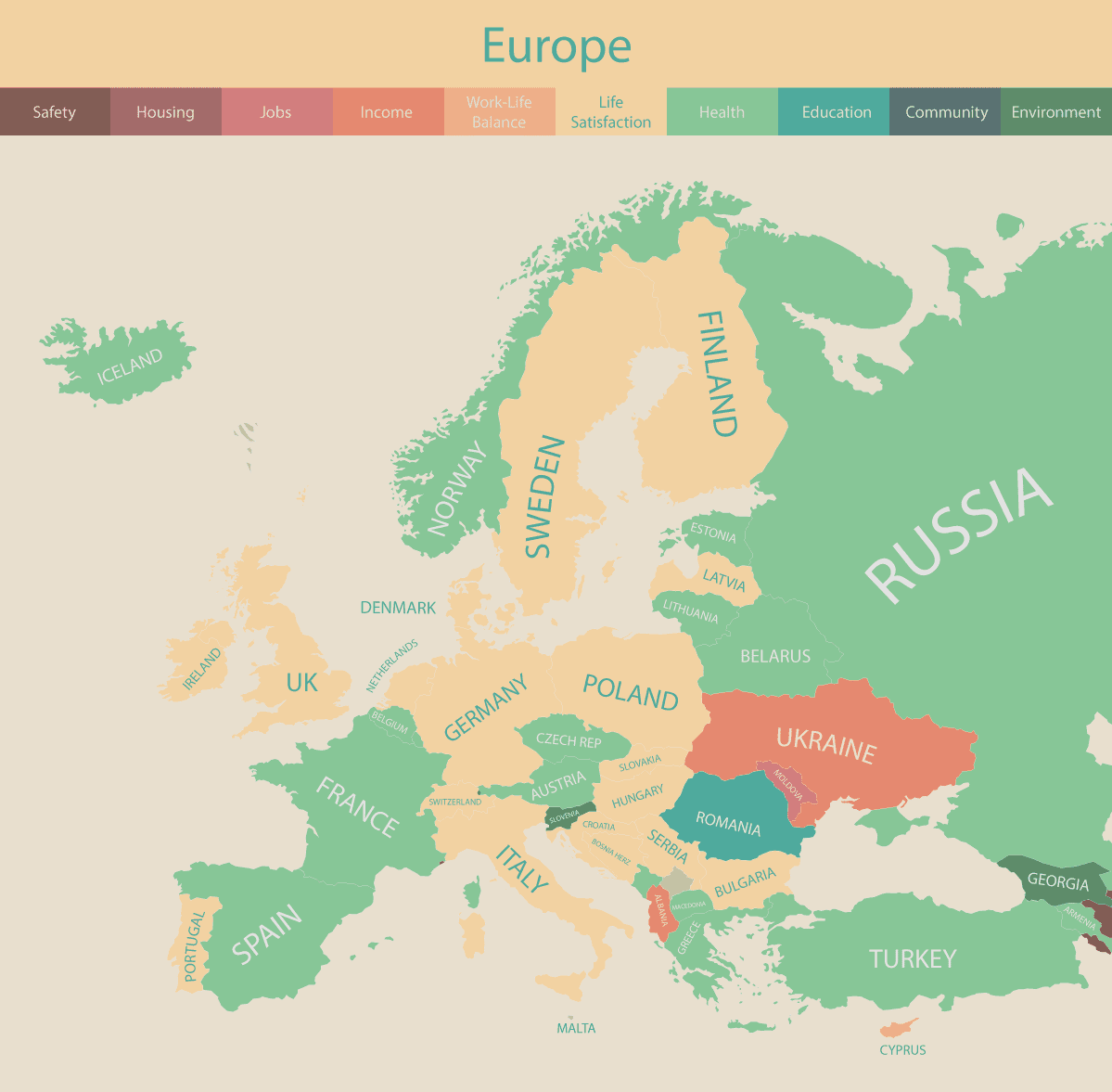 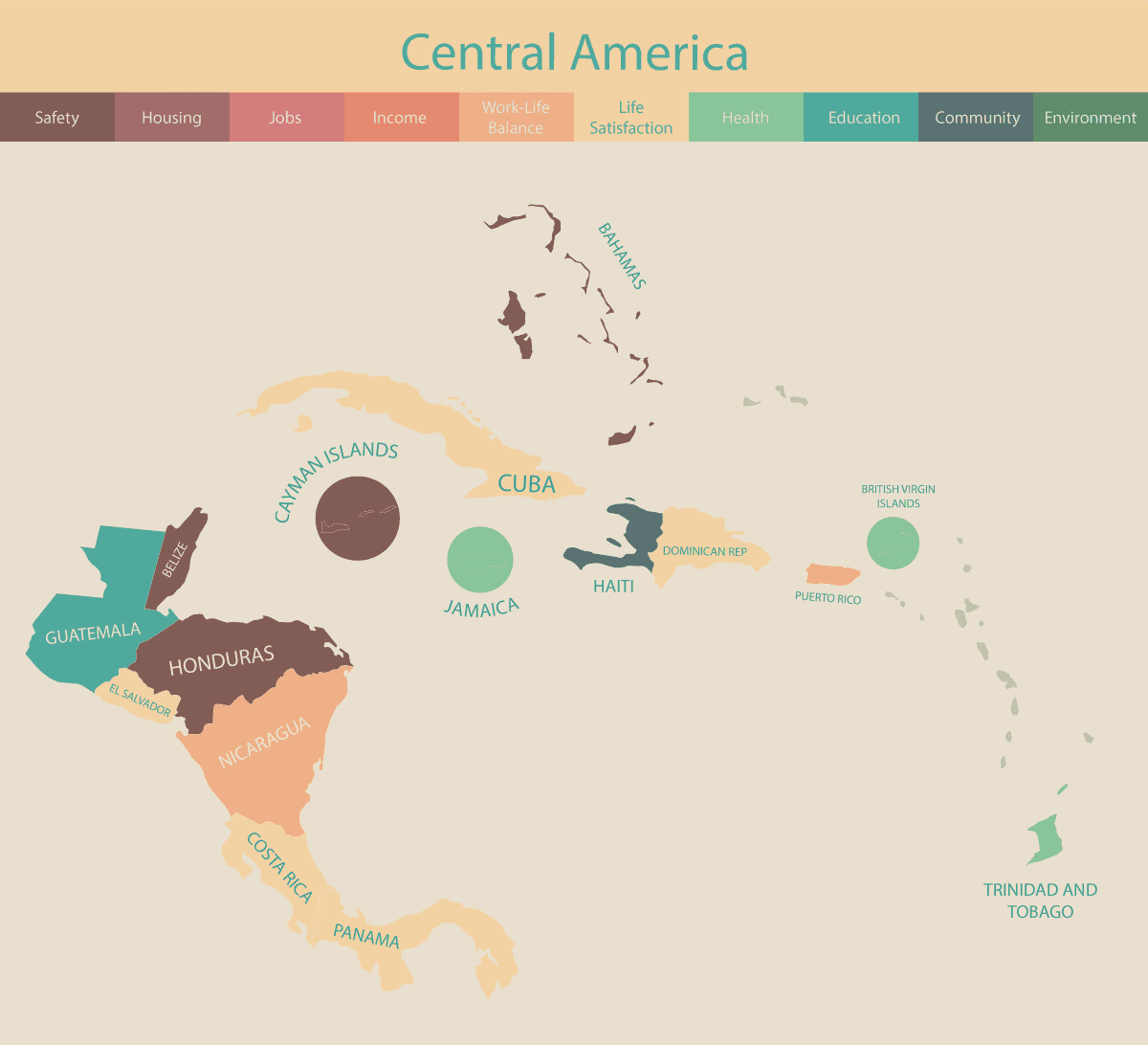 Simply put, people desire what they lack the most in life, whether a roof above their head, money or inner peace. But is this a never ending chain, with one need and desire rising as soon as the former is satisfied? Wealthy countries aren’t necessarily the happiest – far from it. So, if you’re life goal is mostly material, you might want to meditate on that option. Life is short. Life is sacred. Make the most of it.

Mobile technology is revolutionizing nearly everything consumers do. From browsing price comparisons in the store to checking movie times for nearby theaters while you’re still on the road, it’s possible to streamline virtually every activity using your smartphone. Dining is one of the most recent additions to the world of mobile conveniences. Having a smart device powered by a fast 4g network like the sleek Samsung Galaxy S6 in hand when your stomach starts rumbling can make it easier than ever to find, order, and enjoy your meal.

Starbucks has established itself as one of the forerunners with mobile ordering. Customers with the app can place an order for their caffeine fix before they stumble out of the house so the steaming cup is waiting when they stroll in the door a few minutes later. Several pizza restaurants are utilizing similar technology by offering mobile ordering through their apps. Consumers are extremely receptive to this type of technology, with 74 percent of those aged 18 to 34 saying they would order delivery or takeout through a mobile device if it was available.

If you’re in the mood for a more leisurely meal, your smartphone can help here, too. Restaurant finder apps are hardly new, offering locations, phone numbers, menus, and reviews on the fly, so you can pinpoint the best options in your vicinity. Reservation apps are joining the scene as well, making it easy to snag a table before you arrive to minimize your wait.

Mobile conveniences extend all the way into the restaurant. Thirty percent of consumers have used a restaurant’s app to pay their bill. Forrester predicts that mobile payments will reach $142 billion by 2019 as people ditch their wallets for the convenience of paying with a smartphone. Thanks to smartphones, the traditional dining experience may never be quite the same again. Read on to learn more about how technology is changing the way we dine.

I recently came across this remarkable post from the Mother Nature Network (MNN), depicting the best and worst environmental affairs of each US state. So I figured it would be interesting for Americans to see where their state excels, and, on the contrary, where it fares the worst. 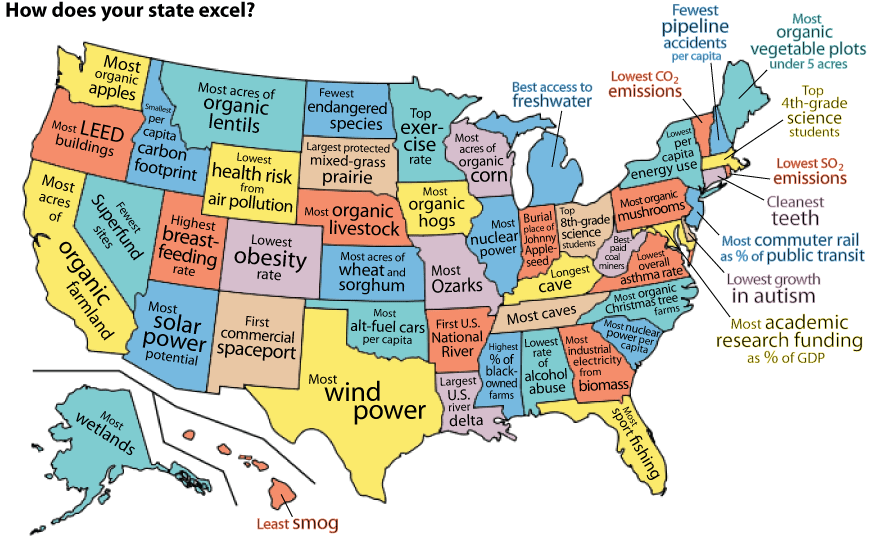 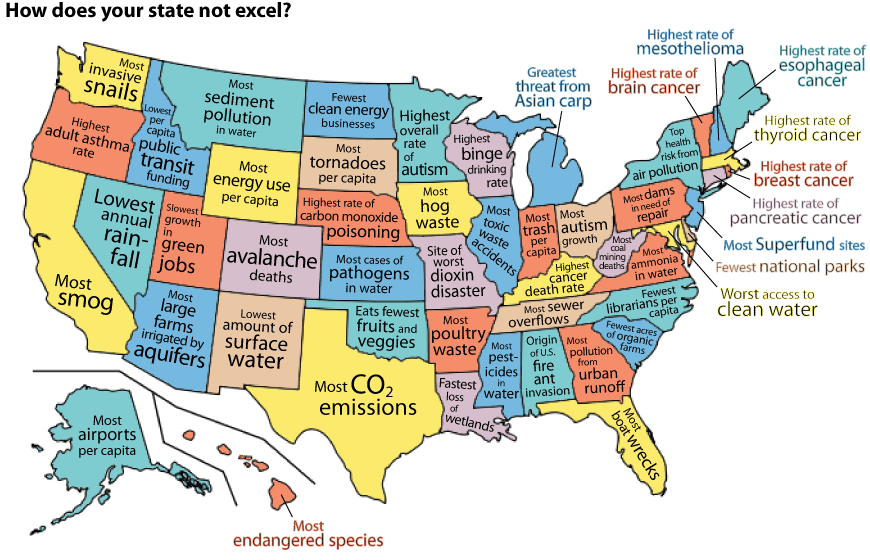 I recently came across this great infographic published over at LiveScience. It pretty much speaks for itself, so, here it is (as always, click it for full size):

Guess what you’re doing right now? Same thing I’m doing as I type this in, I know, but sitting down for too long is not at all alright. Actually, sitting down for more than six hours a day can increase your risk of death by as much as 40%! And no, even if you exercise 30 minutes a day, chances are you’re still not making up for the immense amount of time your body spends sitting.

The below captioned infographic was developed by MedicalBillingandCoding, and although it has a very panicky nature to it, it does tell a big truth – sitting is killing you.

As previously reported, SETI, the international organization which handles the search for electromagnetic transmissions from civilizations on distant planets, will shut down soon due to lack of funding. What’s really bothersome is that, although we all know we live in trouble economic times, the cost of keeping SETI going is simply peanuts for the US government or the huge corporations. The cost is $2.5 million – a travesty by all means when you consider the benefits such a project might provide. Imagine, the first contact with an extraterrestrial signal – it would certainly be greatest milestone in human civilization history. Sure, more pragmatic objectives have to be taken into consideration when budgeting, but heck a measly $2.5 million?

If you’re not really sure what $2.5 million really means for SETI, then here’s a really well put together infographic by microcosmologist, which puts into perspective the sum across other sectors of the US budget and other corporations. Click on the image for a larger view.