Pictures from NASA’s Dawn spacecraft seem to indicate that the dwarf planet was much more active than we thought.

There is probably an ice volcano on Ceres. Image color indicates elevation. Image via NASA.

Ceres is the largest body in the asteroid belt – too big to really be an asteroid, but too small to be a planet, it’s trapped in the “minor planet” classification. But Ceres might be much more interesting than other similar bodies, with its mysterious bright spots being a constant source of amazement. In October 2015, observations revealed white patches on Ceres’ surface, which researchers initially presumed to be ice and then turned out to be salt.

“When we got to Ceres, we were expecting to be surprised, and we have been in many ways,” Dawn principal investigator Chris Russell, a professor of geophysics and space physics at the University of California, Los Angeles (UCLA), told Space.com.

This time, astronomers found something which may very well be an ice volcano – a planetary pimple called Ahuna Mons. The mountain protrudes in an otherwise smooth terrain, it is not an impact feature, and it appears to be the only mountain of its kind on Ceres. Bright streaks run top to bottom on its slopes.

“This is an amazing construct and a huge mountain,” Christopher Russell told Gizmodo. “It’s nothing like a terrestrial ice mound we’ve ever seen.” 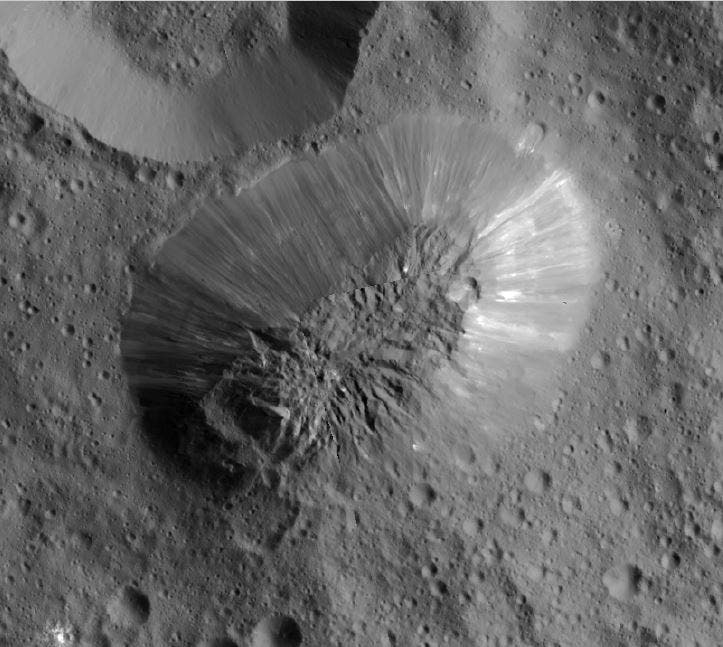 Well, it’s mostly because we don’t have a better explanation. We’ve previously observed ice volcanoes on bodies like Saturn’s moon Enceladus. When the temperature becomes low enough (as is the case on Enceladus and Ceres), “classical volcanoes” can’t exist, and any volcanic phenomenon is manifested through ice.

“In the outer solar system, we never see classic volcanoes because the temperatures are so low,” explains Ottaviano Ruesch of the Goddard Spaceflight Center, who analyzed the images of Ahuna Mons. “Instead, we have salty water ice. At the right temperatures, that material can become molten and rise to the surface.”

There is strong evidence that it isn’t an impact feature, and it’s instead something that comes from within.

“Ceres has been active during its history inside; the interior has been changing, evolving, much like the Earth’s interior changes with time,” added Russell, lead author of one of the new Science papers and co-author on the other five. “It’s in the transition between the smaller asteroids and the Earth, in that it changes, and has changed, over the years from the time that the material initially came together.”

But not everyone is sold on the ice volcano theory. Jeffrey Moore, head of the Geology and Geophysics Imaging Team for the New Horizons mission, has a lot of experience with this kind of features, after analyzing several features on Pluto which look a lot like ice volcanoes.

“It’s an intriguing hypothesis that it is a volcano, and it’s hard to explain without a volcano, but in my view it’s not conclusive,” Moore told Gizmodo. “If Ahuna Mons had more unambiguous flow features coming out of the volcano and down the slope, or a more conspicuous central depression, I think it’d be an easier sell.”

Whether it’s an ice volcano or not, we know it happened relatively recently. Ahuna Mons is just a few hundred million years old, whereas Ceres has a 4.5 billion year history. Further information will hopefully enable us to properly understand this geological feature.