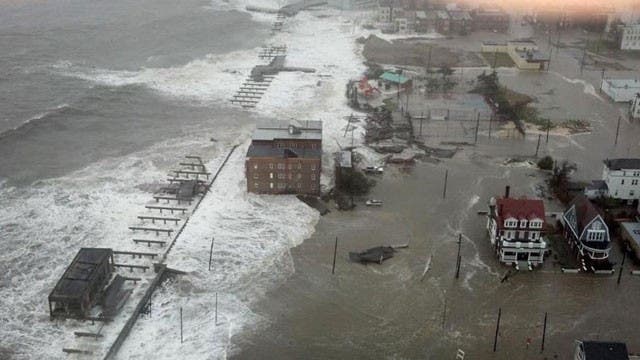 An extremely worrisome climate model predicts, based on current global warming projections, that storm surges – the most damaging and dangerous part of a hurricane – are set to increase in frequency and magnitude by as much as ten times by the turn of the century due to climate change. The scientists involved in the study warn that based on their findings, we’re already starting to pay our dues for XXth century warming as storm surges the size of Katrina are now at least twice as common as they were a century ago.

Climate scientist Aslak Grinsted of the University of Copenhagen in Denmark, along with colleagues, analyzed storm surge records from six tide gauges along the southeast coast of the US, which extend back to 1923. These were used in conjunction with modern, high-detail observations to perform a statistical projection of how powerful and frequent these storms might be in the future, both on average and extremes.

The researchers conclude that there will be tenfold increase in frequency of storm surges if the climate becomes 3.6 degrees Fahrenheit warmer – a Katrina magnitude surge every other year. Current global warming scenarios have mean temperature rise anywhere from 2.0 to 5.2 degrees by the end of the century. The main driver for hurricanes is warm water , and coupled with rising sea levels, things aren’t looking too bright for coastal residents.

While these predictions are extremely worrisome (can the US handle a Katrina every other year or so? I don’t think so…), it’s important to note that even to this day hurricanes are poorly understood. Moreover, the data sets the researchers gathered and analyzed from the the turn of the last century are minimal and poor in details compared to current modern day satellite observations, and as such do not provide a reliable foothold. Sure, they’re alright for estimating and correlating, given we don’t have anything better at hand, still reality might differ from their predictions.

Is the study flawed? Maybe, but here’s something worth considering: when the researchers looked in the past, not in the future, they had something locked in right – “we have probably crossed the threshold where Katrina magnitude hurricane surges are more likely caused by global warming than not,” the researchers note. To be more precise, Katrinas are twice as likely to happen that a mere century ago.

The study was published in the journal Proceedings of the National Academy of Sciences.

In the wake of the Sandy hurricane, which is currently still sweeping through North America’s east coast, weather forecasting has suddenly become a subject of major interest. It shouldn’t take natural disasters, which are getting more and more frequent unfortunately, to spark interest in this matter of grave importance. Despite this, funding for space geosciences, mainly responsible for launching and operating weather satellites, has been drastically cut down in the past decade. The effects are starting to show now as NASA’s weather satellite fleet aged. Experts warn that some weather observations could be become at best incomplete in the coming years if the current trend is maintained.

GOES-East, short for Geostationary Operational Environmental Satellite, and its companion GOES-West survey over the two halves of the U.S. in fix points since their orbits match the rotation of the planet. Recently, however, right in the peak of a hurricane season GOES-East starting giving out erroneous readings, whether they were actual images or inaccurate temperature and humidity measurements. Fortunately, NASA and NOAA had a back-up GOES parked in orbit nearby, which they swung in proper place. What if this back-up as well would’ve been offline? Well, a good chuck of North American would’ve been left with incomplete forecasts or worst yet, completely in pitch black.

Terribly underfunded, offline weather satellites could leave parts of the world in the dark

In 1992 NASA’s budget for geosciences was $2 billion, ten years later, despite inflation, its budget is currently $1.5 billion. Currently, a collective of 90 Earth-sensing instruments are part of the of NASA’s weather-forecasting fleet. That number could fall to as few as 20 by 2020.

It’s not only about forecast. Weather satellites are crucial to gathering data for complex climate and weather models, which help pinpoint  and predict storms in advance. Such models, for instance, picked up on what Sandy was going to do 8 or 9 days in advance. Typically hurricane models can predict them with about 5 days in advance, a huge leap from 3 days in advance a decade ago.

Sure, weather satellites are still being launched, the best example being the recently orbiting Suomi  National Polar-orbiting Operational Environmental Satellite System Preparatory Project (or NPP), but still not frequent enough. While the advancements top of the notch instruments like those on the NPP are invaluable, the truth of the matter is weather satellites have a short life-span and cost a lot of money to maintain, despite representing a fraction of the cost that goes into a spaceship launch.

Hurricane Sandy continues to ravage North America, going strong at 150 km/h winds, and is expected make landfall near the New Jersey-Delaware border Monday night, threatening the entire Eastern Seaboard, with numerous people already being evacuated or preparing for this dire event. Before discussing matters further, I’d just like to express my entire sympathy to all the people in danger or who have loved ones in danger – my best wishes go out to you!

Just two weeks ago, Muncih Re, one of the biggest reinsurance firms in the world conducted a study of their own, called “Severe Weather in North America”. Don’t let the fact that this is a private organization fool you – reinsurance studies are extremely serious, well documented and thorough, because if they’re not, they lose money. What they concluded was bad news for Americans:

“Nowhere in the world is the rising number of natural catastrophes more evident than in North America.”, they wrote, related to “weather-related loss events”

Over the last three decades, this number has increased by a factor of 5, making North America the most prone area for this kind of disaster; while this growth can be attributed to a number of other factors, such as a rise in the number of people living in threatened areas, the main culprit is another old “friend”: global warming.

For the general public, this hurricane’s impact came as a shock; it’s late October, the hemisphere should be breezing towards a winter chill – so what is a super hurricane doing in the United States? This is a very valid question.

For climate researchers, the hurricane came not as a surprise, but rather a confirmation of dire theories.

“Folks, this storm is exactly the sort of thing climate scientists have been worried about for years,” wrote Amanda Staudt, a senior scientist with the National Wildlife Federation. “Global warming is putting hurricanes on steroids and we’re beginning to see the effects.”

So can you draw a line between human activity and hurricane activity? The answer is yes… and not. Rising sea levels, warmer waters and overall hotter temperatures all work together to amplify the damage hurricanes do and extend their season. However, a study conducted by World Meteorological Organization, published in Nature (paper here) came to some interesting conclusions. Here they are, summed up:

So how does this apply to Sandy? Well, there is almost a general consensus that it is, at least partially, fueled by waters with a warmer temperature; if it weren’t for those extra degrees, we would probably see a much smaller impact. But the thing is, hurricanes are complicated, and we still don’t understand them fully yet. There are a lot of factors that affect them, and the relationships between these elements are often hard to pinpoint, but it does seem pretty clear that global warming isn’t helping out.