A hurricane and earthquake happening at the same time sound like an unlikely combo — but at the bottom of the ocean, it isn’t. According to a new study, it’s quite common for a powerful hurricane to cause the seafloor to rumble like a 3.5-magnitude earthquake.

Researchers call this phenomenon a ‘stormquake’. They occur when a large storm forms above the ocean, triggering a secondary wave that interacts with the seafloor. The interaction causes the seafloor to shake, primarily when it is flat and over a large continental shelf.

“During a storm season, hurricanes or nor’easters transfer energy into the ocean as strong ocean waves, and the waves interact with the solid earth producing intense seismic source activity,” said Wenyuan Fan, an assistant professor of Earth, Ocean and Atmospheric Science at Florida State University and lead author of the new study.

There’s no need to worry, though. Although powerful tsunamis such as those that struck Japan in 2011 are formed when an earthquake occurs on the seafloor, stormquakes are simply too weak to pose a threat. In fact, they represent a new useful seismic source that scientists can use to investigate the planet’s structure, especially in locations where we lack seismic instruments or earthquakes. Moreover, they can be used to study ocean wave dynamics during large storms, which ultimately should improve forecasting in the future.

“We can have seismic sources in the ocean just like earthquakes within the crust,” Fan said. “The exciting part is seismic sources caused by hurricanes can last from hours to days.”

The study, which was published was published in the journal Geophysical Research Letters, notes that 14,077 stormquakes have been recorded between 2006 and 2015. Hurricane Ike, which struck the Caribbean Islands and Texas in 2008, and Hurricane Irene, which washed on the East Coast, created the most stormquakes in their path.

But, not all hurricanes lead to stormquakes. The massively powerful Hurricane Sandy barely generated one, suggesting that local oceanographic features and seafloor topography are essential to their formation. No stormquake was detected off the coast of Mexico or the U.S. East Coast from New Jersey to Georgia.

“We have lots of unknowns,” Fan said. “We weren’t even aware of the existence of the natural phenomenon. It really highlights the richness of the seismic wave field and suggests we are reaching a new level of understanding of seismic waves.”

Hurricane Irene is believed to be the 10th billion dollar disaster of 2011, which makes it a new record holder, taking down 2008, which only had 9 such disasters; and hey, we still have 4 months to go! 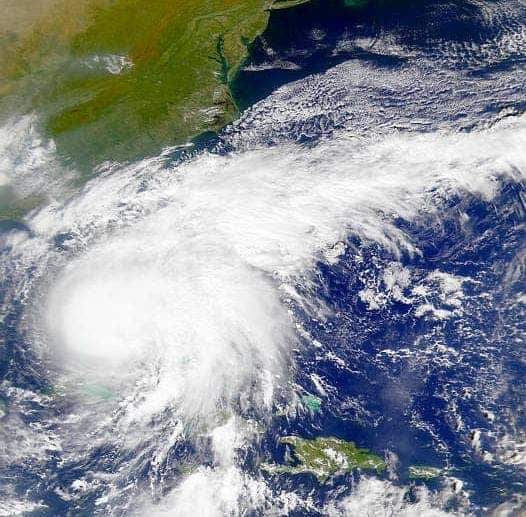 Hopefully, by now, people will start to understand the cost of man’s impact on the plaet ever since the industrial age. Practically, for every one degree rise in temperature, moisture rises by 7 percent, thus amplifying the risk factor for extreme weather conditions, such as hurricanes, for example.

Even though companies (insurance for example) who have followed up on the latest research, and even conducted their own research are starting to treat the rising number of disasters caused by global warming as a given, many people are still confused or even unaware about the impact of global warming. Even though scentists are often reluctant to speak out clearly, 2011 has shown us a strong body of evidence that global warming exists, and that it affects us all.

In Scientific American, John Carey explains it this way,

”Until recently scientists had only been able to say that more extreme weather is ‘consistent’ with climate change caused by greenhouse gases that humans are emitting into the atmosphere. Now, however, they can begin to say that the odds of having extreme weather have increased because of human-caused atmospheric changes—and that many individual events would not have happened in the same way without global warming.”

Storms, floods, tornadoes and heat waves – these are all corollaries of global warming, and if things continue to move in this recent trend, then things will get even worse; this is nature’s way of telling us we have to clean our mess, or at the very least, we have to stop making more mess. If this doesn’t change, then we can honestly say we did it to ourselves.