The human brain is one of the most complex phenomena known to man and despite extensive research, scientists have yet to fully understand it. Although a complete grasp of the nature of the human brain is still far-off, a new study by researchers from the Washington University School of Medicine brings us closer to this goal in the form of a detailed new map of the outermost layer of the brain, revealing almost 100 new regions.

The outermost layer of the brain, referred to as the cerebral cortex, is a layer of neural tissue that encases that rest of the brain. It is the primary structure involved in sensory perception, attention, and numerous functions that are uniquely human, including language and abstract thinking.

In the new study, the team divided the cortex of the left and right cerebral hemispheres into 180 areas based on physical differences such as cortical thickness, functional differences and neural connectivity.

“The brain is not like a computer that can support any operating system and run any software,” said David Van Essen of the Washington University School of Medicine and senior author of the paper. “Instead, the software – how the brain works – is intimately correlated with the brain’s structure—its hardware, so to speak. If you want to find out what the brain can do, you have to understand how it is organized and wired.”

Matthew Glasser, lead author of the study, spearheaded the research after he realized that the current map of the human cortex – created by German neuroanatomist Korbinian Brodmann in the first decade of the 20th century – just wasn’t cutting it for modern research.

“My early work on language connectivity involved taking that 100-year-old map and trying to guess where Brodmann’s areas were in relation to the pathways underneath them,” Glasser said. “It quickly became obvious to me that we needed a better way to map the areas in the living brains that we were studying.”

Using data from 210 healthy young adults, both male and female, the team took measures of cortical thickness and neuronal cable insulation and combined them with magnetic resonance imaging (MRI) scans of the brain at rest as well as during simple tasks.

“We ended up with 180 areas in each hemisphere, but we don’t expect that to be the final number,” Glasser said. “In some cases, we identified a patch of cortex that probably could be subdivided, but we couldn’t confidently draw borders with our current data and techniques. In the future, researchers with better methods will subdivide that area. We focused on borders we are confident will stand the test of time.”

In the future, such cortical maps could be created on an individual basis and help in the diagnosis and treatment of neurological or psychiatric illnesses such as dementia and schizophrenia.

Capitalizing a more than a decade’s worth of neuroscience and computer science research, an international team of 82 researchers from institutions around the world report one the most detailed digital reconstruction of a mammalian brain. The researchers simulated 30,000 neurons and almost 40 million synapses, part of a rat’s brain measuring less than a third of a cubic millimeter. It’s a small step that might one day help simulate the whole brain, not just of rats, but also of humans – the ultimate goal of the Human Brain Project (HBP), an ambitious project which the European Commission prioritized and awarded $1 billion in funding. 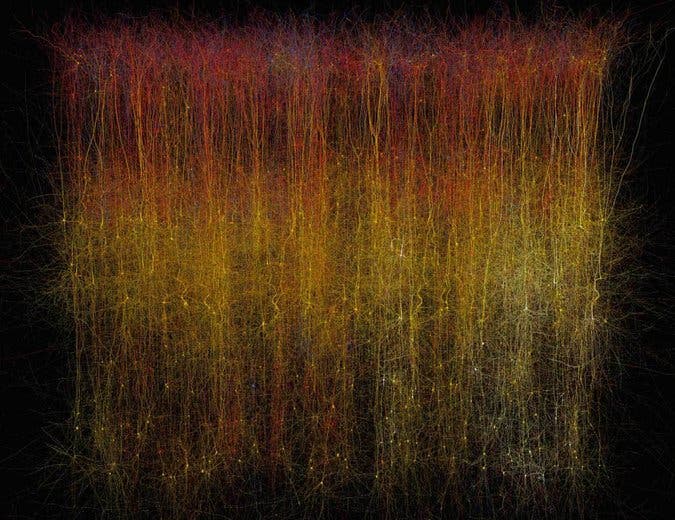 The work was led by Henry Markram, a neuroscientist at the Swiss Federal Institute of Technology (EPFL), as part of the  Blue Brain Project which has been online for 10 years, a sub branch of the Human Brain Project (HBP). Since 2005, Markram didn’t have much to show which is why the neuroscience community has been very critical, especially of HBP as a whole calling it a “money drain” and “lacking focus”. In fact, last year hundreds of researchers signed an open letter calling for a restructuring of the much hyped HBP. “[..] What happened is exactly what we feared: There are no real findings. Putting together lots and lots of data does not create new science,” said Moritz Helmstaedter, director at the Max Planck Institute for Brain Research in Frankfurt, Germany for Science. But Markram has remained steadfast.

“As you can imagine, publishing this paper was very tough in a climate of extreme prejudice based on second-hand information,” Markram says. “Now, at least everyone can judge the science directly for themselves. 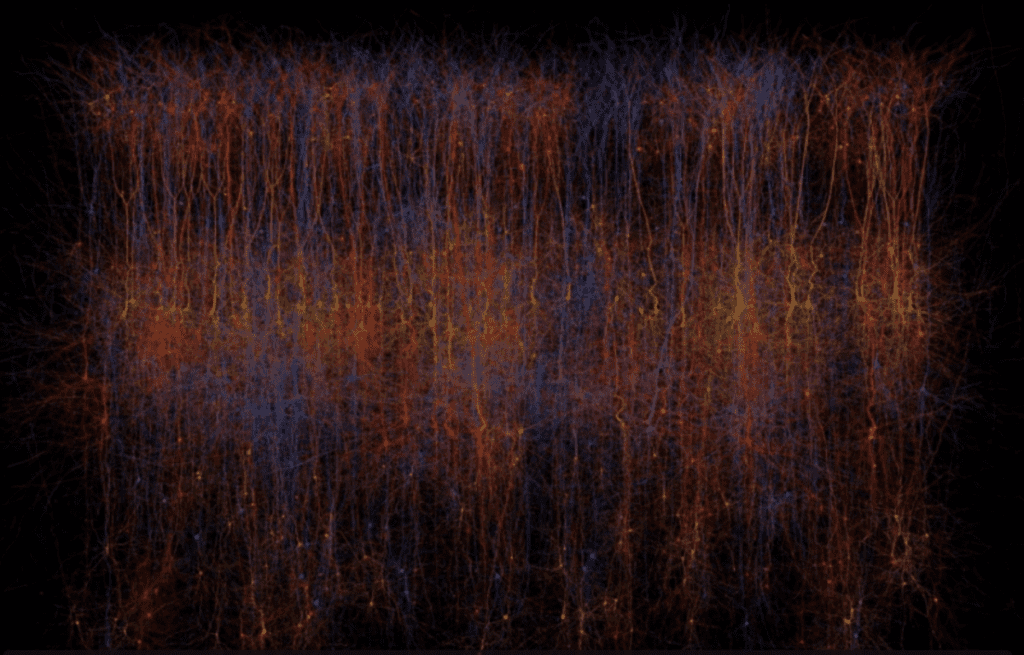 Another shot from the simulation of the rodent neurons. Image: Blue Brain Project

The researchers under Markram built a model of a piece of the sensory cortex which processes information from the hind limb. First, they measured thousands of individual neurons carefully noting everything from their anatomical shape and size, to electrical firing patterns. They identified 55 types of distinct neurons and thought this was good enough to scale them to millions of virtual neurons, which they connected to 37 million junctions or synapses. The model was then run so that it simulated patterns of activity, which were compared with brain scans from live rats – these coincided.

The model was also used to test some hypothesis. For instance, when the amount of calcium ions was reduced the neurons’ firing pattern was changed from synchronous bursts to asynchronous.

Just so you know how, the human brain has roughly 85 billion neurons and about a hundred trillion synapses.This means that the current simulation, which took 10 years to make, marks an infant’s step in the grand goal of simulating the entire human brain. Hopefully, other researchers will join in since all the data is open to study, albeit you need a supercomputer to crunch the model. The report was published in the journal Cell.

I recently came across a very interesting piece in the NY Post which cites a study that shows that while it was well known that a difference in size between male and female brains exists, there is now evidence that there are significant differences in the size of certain structural parts of the brain, according to gender.

As such, researchers have found, for instance, that  a female’s frontal lobe, responsible for problem-solving, is larger than in a man. Meanwhile, a male’s amygdala, which regulates sexual behavior and “fight or flight” reaction, is bigger.

Men have 9% bigger brains, even after correcting for body size. But men and women share the same amount of neurons, they're just more densely packed in a woman's brain. Click for detail view.

Surprisingly, for me at least, it seems in male brains, men have six and a half times more gray matter than women do. Gray matter is partly responsible for information processing, so may explain in general men tend to be better in math.

As for women, it seems human females have 10 times as much white matter — the part of the brain that’s I partially responsible for connecting information processing centers. This could contribute to the stereotype that why women are good multi-taskers.

Women are thought to have 10 times the amount of "white matter" than men. Some researchers believe that it might play a role in why women often excel at language and verbal skills. But, like the gray matter hypothesis, these are controversial conclusions. Click for detail view.

Of course, this doesn’t prove anything. This doesn’t mean men are smarter than women, just because their brains are bigger, or that women will always be more detail orientated than men and so on. Quality is not proven by size, like in most aspects of life. Hormones, genetic different and more add to the puzzle that compose the human brain, be it man or woman, but this particular research remains very interesting, still.

You can read the hypothesis in greater detail here. I’d love to hear some thoughts on this very controversial piece.