In the US, an estimated two million people experience homelessness annually, and about 500,000 individuals sleep in homeless shelters each night.

The congregate nature and hygienic challenges of shelter life create the potential for rapid transmission of SARS-CoV-2 in this vulnerable population. As testing capacity expands in many states, so does the number of positive cases in shelters.

A recent study by the Center of Disease Control and Prevention (CDC) looked at 19 shelters in Boston, Seattle, San Francisco and Atlanta. Of the 1,912 shelter residents tested, 293 or 25% tested positive.

The results had a set of limitations, such as representing a single time point and the fact that some residents declined to be tested, but raised the alarm over the vulnerability of this specific group of the US population.

Several measures should be implemented to protect the shelter residents and staff members, according to the CDC. Infection control practices should be set in place, as well as maintaining social distance and promoting the use of cloth face coverings.

In line with the findings by the CDC, another study by a group of researchers published in JAMA network tested 408 residents of a shelter in Boston over two days. Up to 147 of them (36%) tested positive, the results showed. The average age of the participants was 52 years and almost three quarters of them were men. Only 1% of participants had a fever, 8% reported having a cough, less than 1% reported shortness of breath, and 6% reported other symptoms. Overall, 361 individuals (88.5%) didn’t report any symptoms.

“The majority of individuals with newly identified infections had no symptoms and no fever at the time of diagnosis, suggesting that symptom screening in homeless shelters may not adequately capture the extent of disease transmission in this high-risk setting,” the researchers concluded.

Since the focused testing in Boston, another few hundred people who are homeless in the city have been tested, for a total of 946. Overall, 26% have been positive, according to the city. One person who is homeless is known to have died from COVID-19, and a handful have been hospitalized.

By next week, officials expect that more than half of the city’s adult shelter population will be tested. That shelter population ranges from about 1,500 to 1,800 people on any given night, according to the public health commission. More than 900 isolation beds have been set up locally for people who are homeless.

“It was like a double knockout punch. The number of positives was shocking, but the fact that the positives had no symptoms was equally shocking,” said Dr. Jim O’Connell, president of Boston Health Care for the Homeless Program, which provides medical care at the city’s shelters.

People who were immersed in a virtual reality experience that simulated what it would be like to lose their jobs and homes developed long-lasting empathy toward the homeless. The new study published by researchers at the University of Stanford found that following the VR experience, participants were more likely to sign a petition supporting affordable housing, compared to those that interacted with a 2-D version of the scenario on a computer screen or read a narrative. 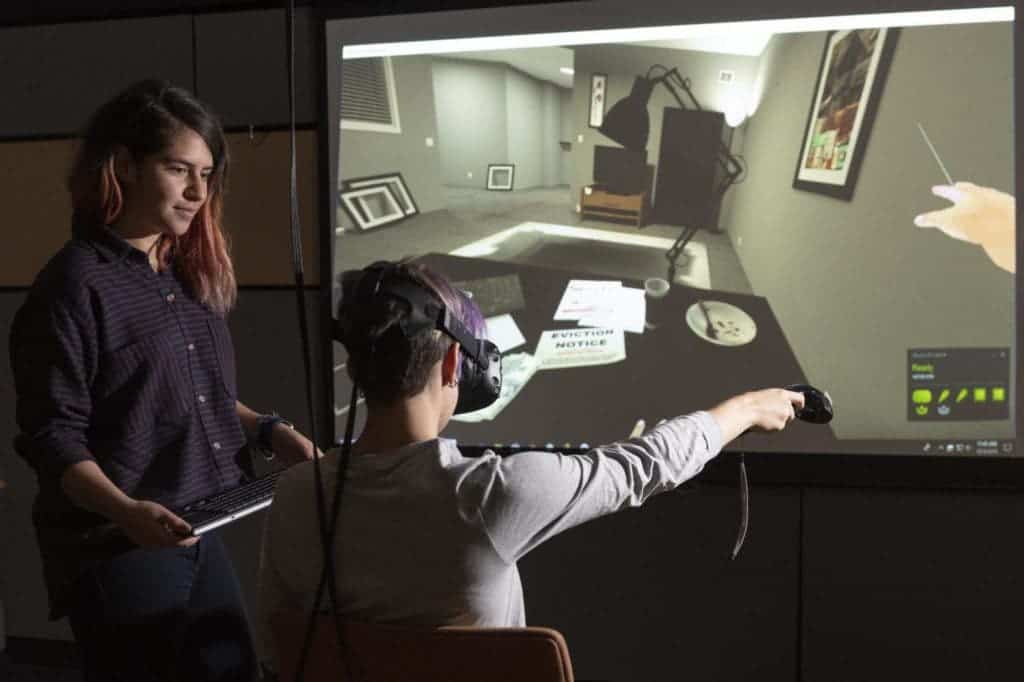 Stanford researcher supervises a student while he navigates through a VR experience that simulates what it feels like becoming homeless. The scene shown here is that of an eviction notice. Credit: L.A. Cicero.

“Experiences are what define us as humans, so it’s not surprising that an intense experience in VR is more impactful than imagining something,” said Jeremy Bailenson, a professor of communication and a co-author of the paper.

Unless you’re a psychopath, chances are that your brain is wired to empathize — the ability for stepping into the shoes of others and understanding their feelings and perspectives. Some people have more empathy than others, but that doesn’t mean that they’ve reached their full potential. A Buddhist-inspired technique for fostering empathy, for instance, involves spending a whole day being mindful of every person connected to your routine. But, nowadays, modern technology offers promising new tools to augment empathy — and virtual reality is a prime candidate.

In the United States alone, more than 10 million VR headsets have been sold in the past two years. It’s quite possible that the technology could become as ubiquitous in households as video games consoles.

But unlike traditional media, virtual reality presents exciting new opportunities owing to its immersive nature. Entertainment is obviously an important industry where VR shines, but there are also untapped opportunities in research or therapy. For instance, British researchers showed in a 2016 study how virtual reality can be used to ease depression.

Now, Stanford researchers have shown that VR can be a great tool for enhancing empathy and promoting social causes.

Unlike previous similar studies that used a small sample size and didn’t examine long-term effects, the new study involved 560 participants, aged 15 to 88, whose behavior was examined over a two-month-long period.

At the end of the studies, the researchers found that the participants who took part in the “Becoming Homeless” condition were far more likely to have enduring positive attitudes toward the homeless than people who performed other tasks (reading a narrative or interacting with a 2-D version of the scenario on a computer).

For instance, participants in the “Becoming Homeless” condition were more likely to agree with statements like “Our society does not do enough to help homeless people.” Also, 85% of participants in the VR experience signed a petition supporting affordable housing, versus 63% who read the narrative and 66% who went through the 2-D version on a computer.

“We tend to think of empathy as something you either have or don’t have,” said Jamil Zaki, an assistant professor of psychology and a co-author of the paper. “But lots of studies have demonstrated that empathy isn’t just a trait. It’s something you can work on and turn up or down in different situations.”

The positive attitude toward the homeless carried on over a long period of time, suggesting that the VR experience had a long-lasting impression on the participants.

In the future, the research team plans on performing new studies to tease out the nuances of VR that influence people to behave in certain ways.

The findings appeared in the journal PLOS One.

Unfortunately, homelessness is still a major problem in most parts of the world. However, people are trying to fight with more creative solutions, and it has been working out. At a homeless shelter in Atlanta for instance, residents can grow their own vegetables. The shelter has a large rooftop garden that can yield a great amount of healthy greens.

The Metro Atlanta Task Force for the Homeless initiated this program so that homeless people have access to organic food. Now, the shelter residents grow 80 garden beds which produce everything from carrots and chart to potatoes and squash. The benefits of the program are twofold: on one hand, they are growing food for themselves, taking a step towards self-sufficiency; on the other hand, they are developing new skills which can help them get into the labor force easier.

The mass construction of homes ironically brought forth an increase in homelessness. Today, few people are capable of building their own homes. Specialization increases demand and price, and this raised the costs of living – to the point where some people simply can’t afford it. In 2005, an estimated 100 million people worldwide were homeless, and that number has undoubtely grown with the situation in Syria and surroundings. The problem is especially acute in urban areas, both in the developed and developing world.

Personally, I think this is a great idea. We need projects like this to help fight homelessness because whether we like it or not, the problem is growing more and more with no solution in sight.