Why would the El Niño be important for the rest of us that don’t live in the western part of South America? Well because it also influences the climate in North America, Asia, Australia, Africa, even Europe perhaps.. so that basically means the whole world. The El Niño-the southern oscillation or ENSO is a sort of a heartbeat of the Earth’s climate, that contains a warm phase (the El Niño) and a cold phase (La Niña). And just like the pulsations of a heart, it’s beats are not monotonous, it is a bit different with every pulsation: some of them are more spread apart than others, some are stronger, some weaker.

A new study that looks at the last 7000 years of El Niño-s finds that this pattern is even more chaotic than scientists previously believed: “This will be a shock for many paleoclimatologists,” says Axel Timmermann, a climate scientist at the University of Hawaii, Manoa, in Honolulu who wasn’t involved in the new research. “[These findings] are a stark contrast to their ideas.”

In order to get an insight into the past variability of the El Niño, scientists are using climate archives such as lake sediments, tree rings from South America or corals from that specific region in the Pacific that is affected by the Southern Oscillation. The study’s lead author, Kim Cobb, a paleoclimatologist at the Georgia Institute of Technology in Atlanta says that they chose the coral archives in their study due to the fact that they allow a decoding of the variations in both temperature and precipitation on a month-by-month basis. This makes the corals a much better archive in terms of their temporal resolution when compared to the other climate archives.

The team chose to study the variations in the oxygen-18 and oxygen-16 ratio from 17 coral samples taken from Christmas Island and Fanning Island, which are both part of the Line Islands archipelago in the central Pacific. That area of the Pacific experiences higher than average values both in precipitation and temperature in an El Niño period, and due to this increased sensibility, according to Timmermann, it “makes the region a ‘sweet spot’ for climate reconstructions.” By analyzing these coral samples, the team gained access to the climate variability of the last 7000 years in that region of the Central Pacific – an archive that according to Kim Cobb, almost triples the amount of data previously available.

It turns out that long-term variations in the magnitude and frequency of ENSO events during the 20th century were larger on average than any other period in the last 7 millennia. As Kim Cobb says, there have been however, shorter intervals, especially in the 1600s when the El Niño variability was even stronger than in the last century. The relationship between higher ENSO variability and higher CO2 concentrations is very probable but cannot be proven yet due to the insufficient climate data now available. 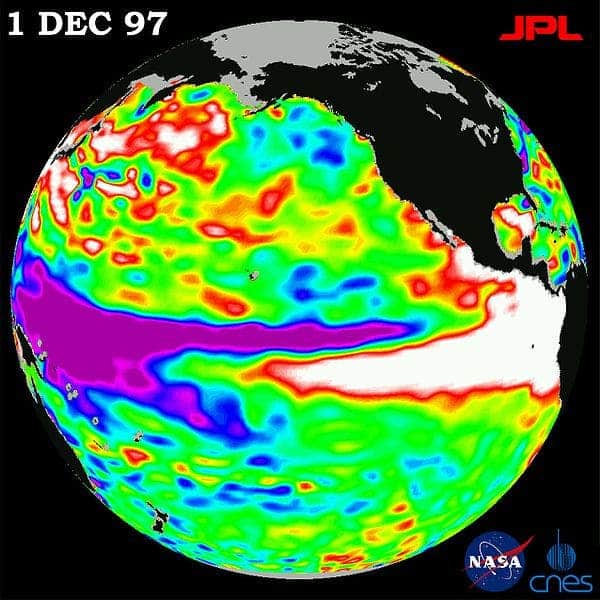 The warm conditions seen in the El Niño of 1997. [Via wikipedia]

“This [study] shows that ENSO is very variable, all over the map, and overturns the idea that ENSO was weaker during the mid-Holocene [about 6000 years ago],” says Julien Emile-Geay, a climate scientist at the University of Southern California in Los Angeles. This being said, it is too early to say weather the ENSO is inherently chaotic and completely separated from other climate forcing factors, the team says.

Timmermann says that maybe in the next 10 years there will be more data that will fill in the gaps of El Niño related climate archives that will also help to decode what factors if any, influence the mysterious ENSO, and by doing so, the regional and global climatic computer models will also be improved.

Controversy surrounds biologist E.O. Wilson’s latest publication ‘The Social Conquest of Earth’. Most of it centres on his repudiation of kin selection and the question of whether or not its replacement, group selection, actually works. What most of the debate overlooks is Wilson’s contention that humans have evolved violent instincts from a past of warfare that he describes as “universal and eternal”.

This assumption that our evolutionary history is warlike is not unique to Wilson – it is implicit in most evolutionary pyschology. In turn these theories rely upon primatology and anthropology to connect supposed current instincts with those of ‘violent’ ape ancestors. Raymond Dart was the first to put forward such a link, when in the 1950s he put forward his killer ape theory that argued for the “predatory transition from ape to man”. Later Robert Ardrey wrote that “man has emerged from the anthropoid background for one reason only: because he was a killer.”

Recently, the anthropologist and primatologist Richard W. Wrangham has sought to provide a more sophisticated mechanism that connects human behaviour with that of our primate ancestors. In his paper ‘Evolution of Coalitionary Killing’ Wrangham puts forward the chimpanzee violence hypothesis, which says that “selection has favoured a tendency among adult males to assess the costs and benefits of violence, and to attack rivals when the probable net benefits are sufficiently high.” This instinct he says, is behind much of our current warfare.

Countering theories, such as Jeremy Griffith’s theory of the human condition, which holds that humans evolved genuinely cooperative instincts, and that our current violent state has a psychological basis, are extremely rare.

What then is the evidence?

We know through archeological discoveries, as well as pictorial records, that the Holocene Epoch (from the present to approximately 12,000 years ago) was characterised by warfare; however similar finds from the Paleolithic are almost non-existent.

A cave painting in Jebel Acacus, modern day Lybia. Along with many other, this painting is 12 000 years-old and is among some of the best works found anywhere else in the world.  Source

The Paleolithic (covering a lot of what is colloquially known as the stone age) is that period of time that stretches back from the start of the Holocene to some 2.5 million years ago. If violence and the propensity to war are instincts inherited from our ape ancestors, we would expect to find a continuation of evidence leading all the way back to those ancestors. Indeed, if our instincts were formed by “universal and eternal” warfare as Wilson claims, then the Palaeolithic should abound with evidence of interpersonal violence, just as the Holocene does.

In looking for evidence of violence, there are three main sources that scientists rely upon. I. J. N. Thorpe describes them as: “the existence of weapons, depictions of warfare, and skeletal remains demonstrating conflict”.

Of these, the most incontrovertible are skeletal remains demonstrating conflict  because they have weapons or artefacts lodged in them, or injuries that could only have been incurred from early human weapons–this is gold standard evidence if you like.

While it is not exhaustive, nor entirely ‘gold standard’, the following lists most of the accepted archaeological finds from Palaeolithic times that might indicate interpersonal violence:

90 k.a. BP. Kasies River, South Africa. A healed skull fracture is argued to be from an attack.

50 k.a. – 12 k.a. BP. There are a number of multiple burial sites e.g. at Predmosti in Moravia where 20 individuals were buried. There is argument whether this was due to lethal conflict or disease or starvation.

13 k.a. BP. San Teodoro cave in Sicily. Woman with a flint point in her iliac crest.

12 k.a. BP Jebel Sahaba Nile where. 59 burials or which 24 skeletons had flint points embedded in the bones or found within the grave fill. The excavator of the site suggests that environmental pressure and vanishing resources were the cause of the violence.

I.J.N. Thorpe argues that if a bioligical theory of violence such as Wrangham’s chimpanzee violence hypothesis did hold, then even taking into account the vagauries of archeological research, there should be common and uniform evidence of violence across cultures and time. Thorpe says: “The biological theories imply a constant level of violence, not supported by the archeological evidence, which demonstrates significant variations in evidence for conflict from virtually none to apparent massacres.”

However beyond the skeletal evidence, the artistic evidence (or lack thereof) is perhaps even more compelling. During the Holocene, war dominated all artistic records, both pictorial and mythic. This domination makes the lack of any such pictorial record during the Paleolithic even more notable. This is an extraordinary distinction. The palaeobiologist R. Dale Guthrie, arguably the world’s leading authority of Palaeolithic art, comes to this conclusion: “This shortcut to stored bounty by raiding the wealth of others became a universal tribal phenomenon: warring conflicts constitute most of recorded and mythic Holocene history. But Palaeolithic art shows no drawing of group conflict, and there is virtually no indication from late Palaeolithic skeletons of murderous violence.” (underlining mine)

In summary, biological theories of violence and aggression, such as that put forward by E.O. Wilson in support of group selection, presuppose uniform and consistent levels of violence; however the evidence does not support this. On the contrary, the evidence is that while some violence exists in extant chimpanzees, the behavioural history of hominins was almost entirely violent-free before 12,000 years ago. The conclusion that is hard to escape is that our propensity for violence is not instinctive, and that we need to look elsewhere for its cause.