In the frozen reaches of Norway, one family is warming up in a beautiful cob home. Under a dome!

Norway — not exactly a tropical paradise. But the Hjertefølgers have been living what many of us would consider a dream here since 2013. Tucked away on the frigid Sandhornøya island, the family is living a sustainable lifestyle without sacrificing comfort or glam. Their three-story cob home (built with sand, water, clay, and other organic materials) is insulated from the ice in a solar geodesic dome by Solardome.

Despite boasting five bedrooms, two bathrooms, and six inhabitants, the house fits snugly inside the 25-foot-high dome. In fact, there’s even room for a garden — where the Hjertefølgers grow much of their food. Apple trees, cherries, plums, apricots, grapes, cucumbers, tomatoes, various herbs, squash, even kiwis languish in the greenhouse-like interior of the dome, safe from Norway’s cutting winds and crushing snow. And, despite the area’s complete lack of sunlight for over three months a year, they provide much of the produce the six-strong family needs. 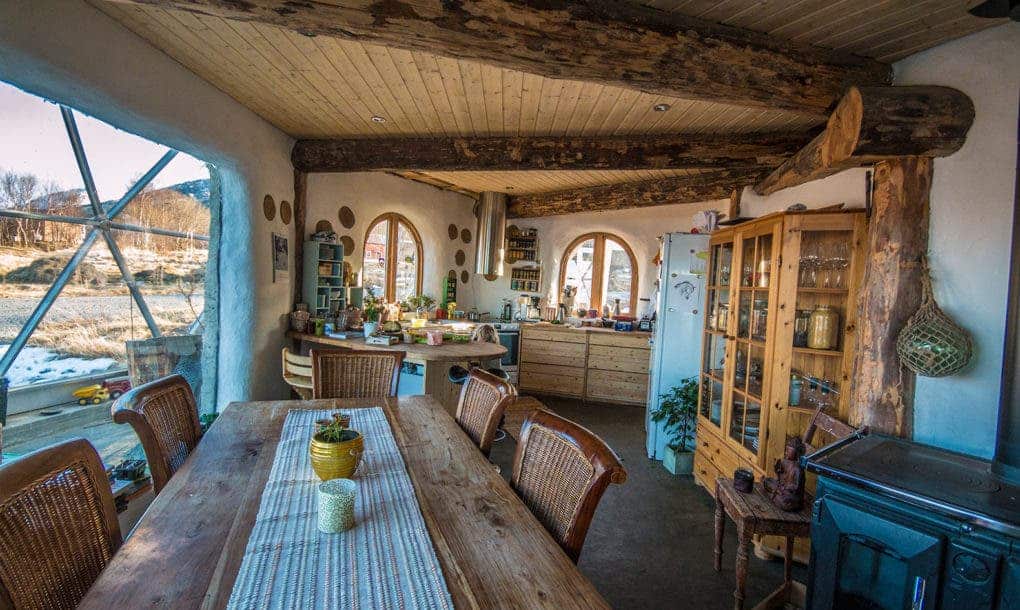 In contrast to the land’s frigid trappings, the home’s interior is warm and welcoming — while sacrificing none of Norway’s breathtaking beauty. The family can even enjoy the Northern Lights (the real ones!) without ever passing the doorstep.

“We love the house; it has a soul of its own and it feels very personal. What surprises us is the fact that we built ourselves anew as we built the house,” Ingrid Hjertefølger told Inhabitat. “The process changed us, shaped us.”

The house — which was built from the ground up by the Hjertefølgers and friends — has been housing the family for three years now. They say that it has a unique atmosphere to it, something that they feel would never have been the case with “a house someone else has planned and built for [them], or a house with corners and straight lines.”

The family has a blog that you can follow, here. If anyone needs me for the next few hours, just know I’ll be there, pining over how awesomely cool (but warm) their home is and over their carrots. Their carrots look ridiculously plump.