Two years ago, we were telling you about plans for developing the world’s largest solar thermal energy plant in California – a project in which Google invested $168 million. Now, the much anticipated Ivanpah Solar Electric Generating System has finally kicked off! The 14 square km facility (3500 acres) which is backed not only by Google, but also by NRG Energy, Bechtel and Brightsource Energy will produce 392 megawatts — enough to power 140,000 homes while reducing carbon emissions by 400,000 tons per year.

The project’s total costs were $2.2 bln, with $1.375 billion being borrowed from the US Department of Energy. Ivanpah consists of of 300,000 sun-tracking mirrors (heliostats), which surround three, 140 meter towers. Here’s how it works: the mirrors move to make the most of the sunlight, and they reflect the rays onto the water contained by the towers, creating super hot steam which then drives turbines on the site to produce power.

This idea of courses raises some questions and controversies – why would you build a solar plant that uses water in the desert, instead of photovoltaics? I don’t really have all the data, and this does seem like a valid critic, but perhaps it is better this way. Also, environmentalists were concerned about the relocation of wildlife, most notably 100 endangered desert tortoises.

Still, Ivanpah represents a noteworthy milestone both locally, for the inhabitants of California, and globally – it’s the world’s largest solar thermal energy plant after all. 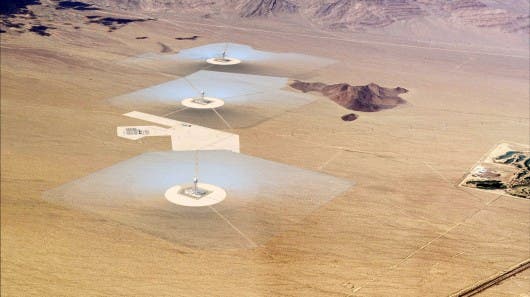 A model of the ISEGS, the world's soon to be largest solar tower power plant.

The search engine giant who has dabbled in environmental projects before announced that it will chip in $168 million to the yet under development Ivanpah Solar Electric Generating System (ISEGS), the soon to be world’s largest solar tower power plant. The site will be located on 3,600 acres of land in the Mojave Desert in southeastern California, where it will boast 173,000 heliostats that will concentrate the sun’s rays onto a solar tower standing approximately 450 feet (137 m) tall. Construction has already started in October 2010, and is expected to be finished sometime in 2013.

Just to get an idea how important the ISEGS will be, the current largest solar tower power plant is located in Spain and is more than 150 smaller both in surface covered by heliostats (1,300 mirrors) and power outputted (only 20 MW) than the soon to be completed ISEGS. When completed the ISEGS will single-handedly almost double the amount of commercial solar thermal electricity produced in the U.S. today and nearly equal the amount of total solar installed in the U.S. in 2009 alone.

Solar tower power plants are on track to become the industry standard in terms of solar power, since they’re a lot more efficient than the conventional trough systems, which consist of parabolic mirrors that concentrate sunlight onto a Dewar tube running the length of the mirror through which a heat transfer fluid runs that is then used to heat steam in a standard turbine. On the other hand, solar power towers work differently.

The ISEGS solar tower generates electricity by focusing it’s numerous solar panels towards a perfectly balanced tower, which heats a system, producing high temperature (550 ° C) and pressure, which ultimately drive a turbine and generator. The ISEGS works differently thanks to its dry-cooling technology as well, which reduces water consumption by 90 percent and uses 95 percent less water than competing solar thermal technologies.

The entire complex will consist of three separate plants developed by BrightSource Energy that will be built in phases between 2010 and 2013. The energy generated from all three plants at peak hours is estimated to produce more than 2,600 MW of electricity,  enough to supply more than 140,000 homes in California.

Up until now, Google has already invested $250 million in other environmental and eco-friendly projects, but the company’s ISEGS deal is its largest single investment in the field to date.