Following their steps, Pavel S. Blagov, an associate professor of psychology at Whitman College and the corresponding author, wanted to use that knowledge to predict links between entertainment preferences and recent models of maladaptive personality or unhealthy traits.

“These are the kinds of traits that clinical psychologists and psychiatrists might measure to describe long-standing difficulties in people’s usual ways of thinking, feeling, acting, and relating to others,” Blagov said.

Baglov and the researching team surveyed 379 Americans (ages 18 to 65 years) regarding their musical preferences, movie interests, personality traits, and psychopathic tendencies. They were able to uncover several relationships even after accounting for sex and aged differences.

“In general, some maladaptive traits appear to be linked to the kinds of music and movies people enjoy, but it is important to remember that the links are relatively weak. For example, people who tend to be unusually introverted or withdrawn do not seem to enjoy the kinds of stimulating, upbeat music played at social gatherings,” Baglov said.

The study showed that people who are prone to strangeness, oddity, or eccentricity in their thinking report enjoying a wide variety of music and movies, as do people who describe themselves as unusually fearless and dominant. These findings parallel results from the literature on normal personality traits.

No support was found for the notion that people who enjoy intense/rebellious music (heavy metal, punk, alternative rock, hip-hop, rap, and rave) show maladaptive personality tendencies, despite it had been suggested in previous literature. This can be liked to those genres becoming more accepted, researchers said.

“These findings do not mean that finding out what music and movies a person likes will readily allow us to guess how withdrawn, eccentric, fearless/dominant, or hostile the person is. They may exist at the population level, but they should not be used to ‘analyze’ individuals,” Blagov noted.

Researchers noted that despite their findings it’s still unclear how well the results apply to other countries and cultures — or even subcultures within the United States. The results are also correlational, preventing the researchers from making determinations about cause-and-effect.

“There isn’t enough research yet to explain the mechanisms, or the reasons why some normal and maladaptive traits are linked to entertainment preferences,” Blagov said.

“For example, do withdraw and unusually introverted people veer away from upbeat music because they also shun social gatherings, or because the music is overstimulating to them in an unpleasant kind of way?”

For many years, heavy metal was stuck as a fringe preference, ignored by music theorists and the mainstream listeners alike. But that has gradually changed, and some scientists are starting to focus more on this expansive music genre.

Iron Maiden is one of the pioneers of heavy metal. Image: Wiki Commons.

When Esa Lilja, Adjunct Professor at the University of Helsinki, started studying heavy metal academically in 1998, the literature was almost completely devoid of any information. Lilja, who is a pioneer of academic heavy metal research, now works with two PhD students to study the genre.

There are plenty of stereotypes about heavy metal, and Lilja is well aware of them. But most of them aren’t really true. Probably the most prevalent one is about metal’s musical origins.

“Metal is based on classical music theory, and it has a great deal in common with renaissance music, for example,” states Lilja.

Nowadays, heavy metal has an international audience and is well known to a larger size of the population, thanks to the efforts of pioneers such as Metallica and Iron Maiden, as well as more modern ambassadors such as Lordi (who won the mainstream Eurovision contest) and Apocalyptica (who became famous by performing covers of metal songs on classical instruments). In Scandinavian countries, metal is even more popular — it’s essentially mainstream there.

It makes a lot of sense, then, to study it in greater detail.

Paolo Ribaldini, one of the PhD students, studies vocal techniques, while Kristian Wahlström (Tuhat) is focusing on the educational dimension of heavy metal – such as how metal could be employed in music education.

“If a student is interested in heavy metal and has an emotional connection to it, new learning material could be built around excerpts from heavy metal, which the student is already familiar with. They could be used to indicate similarities between different musical genres,” Lilja explains.

Apocalyptica has made a name for themselves by covering metal songs with classical instruments. The band started out as a university project. Image: Wiki Commons.

It’s also interesting to note that many metal bands emphasize historical or mythological themes, which may also have an educational component. Although there are national components to some songs, metal is essentially an international genre, Lilja says.

“I think the national features have more to do with extramusical factors, such as mythological allusions in the lyrics or the overall image of the band.” One well-known example is Amorphis, a band whose lyrics are rife with references to the Kalevala, the Finnish national epic.

Lilja who is, of course, a metal head himself,, also notes that although heavy metal is a pretty niche genre, there’s a lot of variety and no unified theme.

“We middle-aged metal heads in particular are as eclectic a bunch as any set of middle-aged people,” says Lilja, who is 45.

Anecdotal observations and even some studies claim that listening to extreme music like heavy metal, punk or hardcore causes anger and expressions of anger, like delinquency or violent behavior. Researchers in Australia, however, found that this isn’t the case. After closely following 39 extreme music listeners aged 18–34 years, the psychologists found that extreme music didn’t make the participants angrier – even after they were purposely made angry. Instead, when they tuned to their favorite extreme music, the participants exhibited a lower heart rate, which is associated with less angry response, showed an increase in positive emotions. 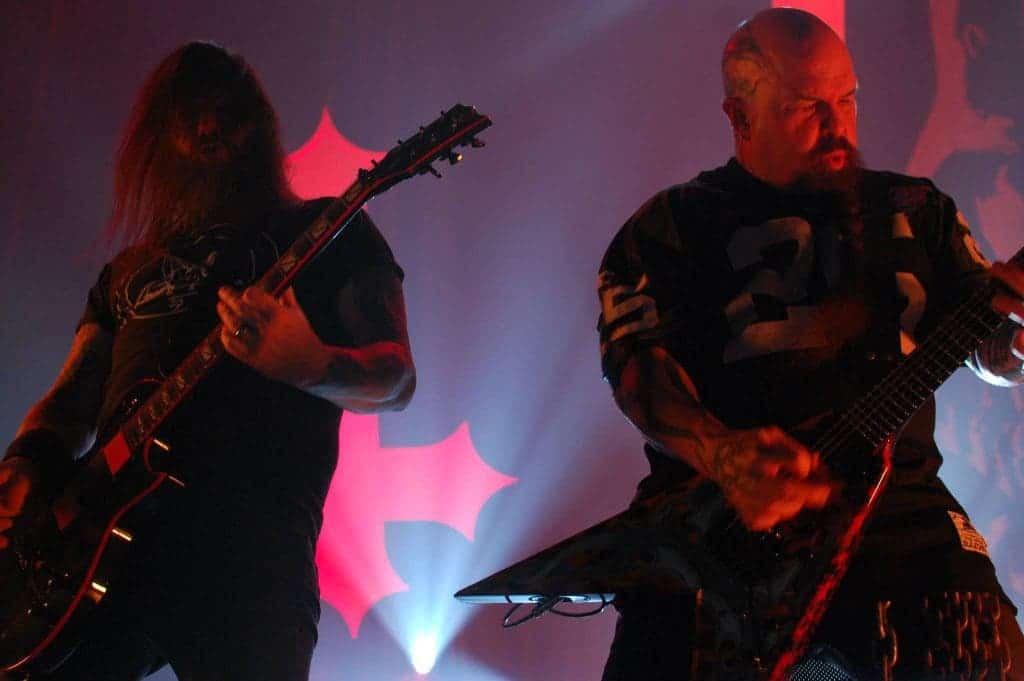 Because of its highly arousing nature  (chaotic, loud, heavy, and powerful sounds, with emotional vocals) and the negative, depressing lyrics extreme music often features, some interpret the genre or class of genres as eliciting anger among listeners. In turn, this may activate aggressive behavior. But does the music make you angry or do you listen to the music because you’re angry in the first place? That’s equally plausible, at least, since the arousing nature of extreme music may match the already powerful and engaged internal emotional state of the listener. It’s no easy task, but the researchers at University of Queensland, Australia wanted to find out which of the two hypotheses was true.

The researchers recruited 39 participants, mostly males, who listened to musical genres like classic metal, death metal, progressive metal, punk, power metal, melodic metal, folk metal and more. Some 41% of the participants also played a musical instrument, the average number of years playing instruments or singing being 5 years. Participants were randomly assigned to either the music or control condition before the study began.

Electrodes that recorded their heart rate were attached, and after period of calm during which the participants were asked not to think about anything in particular the first set of Positive and Negative Affect Scale (PANAS) test was performed. The researchers then conducted 16 minute-long anger interview, which was supposed to illicit an anger response from the participants. Yet another PANAS set was performed.  Those assigned to the music condition were instructed to select song(s) of their preference from their personal music device and left to themselves for 10 minutes. The control group, on the other hand, was asked to sit silently for 10 minutes.  All participants then completed the PANAS items for a third time.

The Australian researchers concluded that symptoms of depression, anxiety, or stress were in the normal range, and there were no differences between participants in the two conditions. The authors conclude in their paper:

“This study found that extreme music fans listen to music when angry to match their anger, and to feel more active and inspired. They also listen to music to regulate sadness and to enhance positive emotions. The results refute the notion that extreme music causes anger but further research is required to replicate these findings in naturalistic social contexts, and to investigate the potential contributions of individual listener variables on this relationship between extreme music listening and anger processing.”

If you’re curious, here’s a playlist compiled with the tracks the participants used in their sessions. 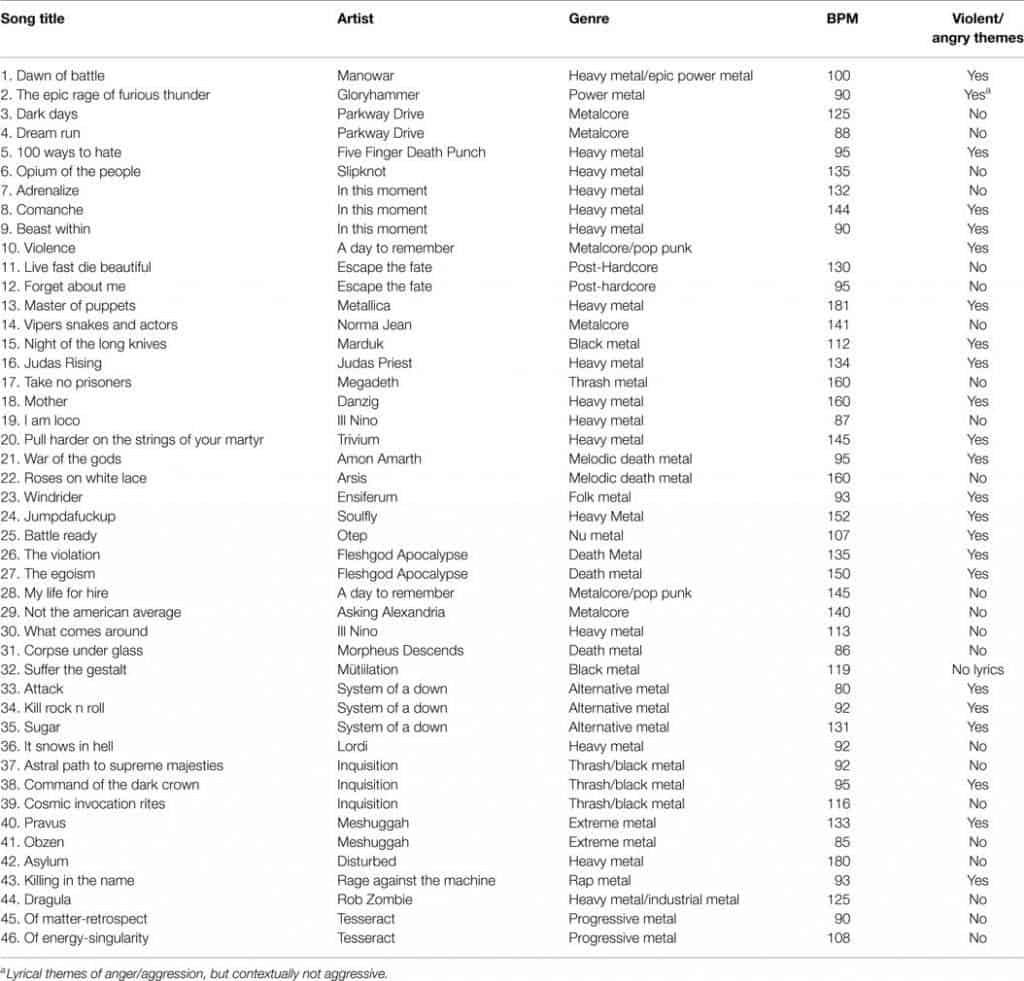