Developed but unhatched birds can not only pick up signals from their parents — they can also communicate with their (also unhatched) siblings by vibrating their shells.

Inside the eggs, gull embryos hear, and respond to, warning calls from adult gulls.

We humans are spoiled in many ways. We’re completely dependent on our parents for years, it takes us a long time to learn how to walk, and in most parts of the world, we rarely have to provide for ourselves. Other creatures don’t have these luxuries — they need to be prepared for danger as quickly as possible.

When danger lurks, most birds produce a distinctive warning sound. For gulls, it’s a specific “ha-ha-ha” sound. Chicks pick up on this signal and are alerted of the looming danger. But even before chicks are hatched, they can still pick up the danger.

A pair of researchers with Universidad de Vigo in Spain found that unhatched chicks can pick up the danger signal and vibrate their shells, transmitting the message to their less-developed siblings.

“We were very surprised,” said Jose Noguera, the lead author of the study from the Animal Ecology Group at the University of Vigo, Spain. “We were aware that bird embryos were able to produce egg vibrations, [but they vibrated] even more than we expected.”

This is not the first time embryonic communication has been studied. Previous research has shown that embryonic birds, amphibians, reptiles, and even insects receive sensory information that helps them prepare for the harsh realities of the real world. Being aware of these dangers and sharing this information with nestmates can help chicks adapt to real situations more quickly, boosting the family’s chances of survival.

The team also found that there are significant behavioral changes associated with this pre-hatching behavior.

In order to reach this conclusion, the team collected 90 yellow-legged gull eggs from Sálvora Island, a large breeding region off the coast of northern Spain. They sorted them into nests of three. Six days before hatching, two out of the three nest eggs were removed from the nest and then exposed to either a recording of a predator alarm or white noise. The third group was not exposed to any sounds.

The birds exposed to alarm calls vibrated in response. When they were reunited with the egg that was not exposed to any sounds, this egg also mimicked the vibrating sounds. The eggs also underwent genetic chances known to delay hatch time, as a response to looming danger, and had an increase in the production of stress hormones, which makes birds more aware of their surroundings after hatching. Birds that were exposed to alarm sounds were quicker to run and hide after hatching.

Researchers are still unsure how the embryos produce and understand these signals, but it’s an absolutely remarkable communication system, which may be much more widespread than it was previously realized.

The findings are published in the journal Nature Ecology and Evolution.

Researchers have unearthed the very first baby snake fossil in history — and it’s teaching us a lot about how snakes’ biology and ecological role evolved. 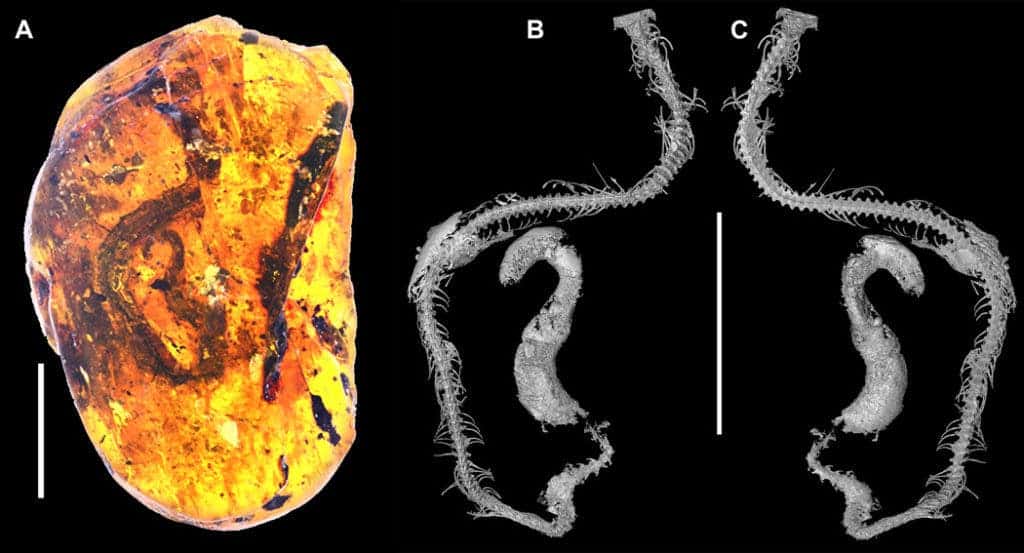 The piece of amber encasing the fossil, alongside a synchrotron x-ray image of the snake skeleton within. Scale bar is 10 mm.
Image credits Lida Xing et al., 2018, Science Advances.

Scientists digging through the Angbamo site in the Kachin Province, Myanmar, have unearthed a 99 million-year-old baby snake, beautifully encased in amber. The fossil, dating back to the Late Cretaceous period, is the oldest baby snake fossil ever found to date, and the first snake we know of that lived in a forest.

The small Southeast Asian country of Myanmar is a known treasure trove of fossils. The area previously yielded the tail of a feathered dinosaur, their ticks, as well as a baby frog, all encased in the beautiful amber that the region is famed for. But Myanmar’s soil has yet to reveal all its treasures, judging by a recent discovery — that of a baby snake, similarly preserved in fossilized tree sap. Alongside this, the researchers also found a second snake fossil (also encased in amber) likely containing part of the shed skin of another, much larger snake. It is unclear so far if the two are members of the same species.

Snakes today are a very successful group. They’ve spread across all continents except Antarctica, and number roughly 2,900 different species. However, they weren’t always so pervasive; they only emerged on dry land during the Cretaceous period.

The new fossil shows us that by around 99 million years ago, snakes had found their way from swamps or sea shores to become fully-terrestrial in forested environments. The second fossil only consists of skin and scale fragments, but are still distinctly snake-like, its discoverers report. This second fossil shows dark and light patterns of coloration and likely formed from the remains of an older, larger individual.

Both are extremely similar to snake species living today, a testament to how well-adapted little these little, slithering predators are to their ecological niche. 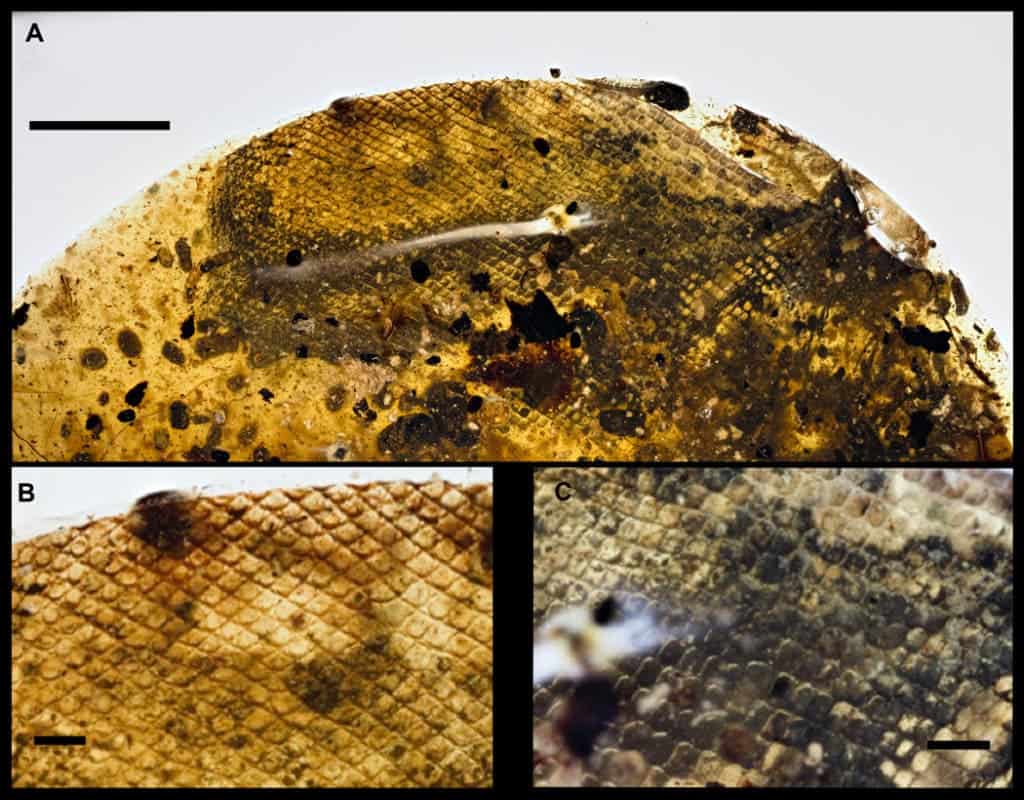 Using uranium-lead dating, a research team led by Lida Xing from the China University of Geosciences and Michael Caldwell from the University of Alberta dated the fossils to about 99 million years old. A technique called synchrotron x-ray micro–computed tomography allowed the researchers to get a close look at the tiny specimens inside the amber without having to break them apart.

The baby snake was just hatching when it died, the team report. It’s very tiny, at some 47.55 mm (1.8 inches) in length, but for reasons yet unknown it’s missing a head. Still, based on lab imaging, the team was able to document nearly 100 vertebrae, alongside bits of rib and other anatomical features. While very similar to other snakes from the Cretaceous, it’s distinct enough, the team argues, to warrant receiving its own name. They settled on Xiaophis myanmarensis, where “Xiao” is the Chinese word for “dawn,” “ophis” the Greek word for “snake”, and “myanmarensis” for the place of its discovery, Myanmar.

Neither of the snakes is significantly different from species today — the earliest direct evidence so far that the biology of snakes has remained relatively unchanged over the last 100-or-so million years.

The fossils are further relevant as they’re the earliest evidence of Mesozoic (the larger Era which includes the Cretaceous) snakes living in forests. This indicates “greater ecological diversity among early snakes than previously thought,” the study notes. The link was established by the remnants of insects and plant material found in association with the snake fossils.

The paper “A mid-Cretaceous embryonic-to-neonate snake in amber from Myanmar” has been published in the journal Science Advances.