If you want to keep your snacks safe at the beach, be ready to stare down bold seagulls. 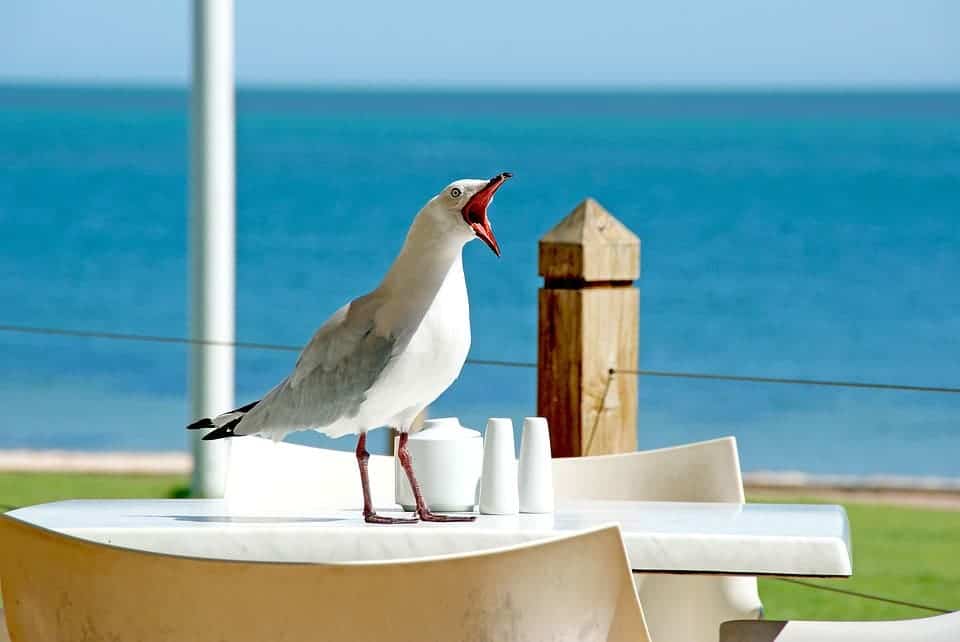 Researchers at the University of Exeter report that looking straight at a gull that’s stalking your food can help dissuade the bird from approaching. The team placed a clear plastic bag filled with chips in front of herring gulls and tested how long it took the birds to approach when a human was watching them, compared to when they were looking away.

On average, gulls took 21 seconds longer to make a run for the chips when a human was looking at them.

“Gulls are often seen as aggressive and willing to take food from humans, so it was interesting to find that most wouldn’t even come near during our tests,” said lead author Madeleine Goumas, of the Centre for Ecology and Conservation at Exeter’s Penryn Campus in Cornwall.

“Of those that did approach, most took longer when they were being watched. Some wouldn’t even touch the food at all, although others didn’t seem to notice that a human was staring at them.

The team attempted to run the test with 74 herring gulls (Larus argentatus) in coastal towns in Cornwall, but most flew away or would not approach. Only 27 finally made a pass at the chips, and out of these, only 19 tried both when watched by a researcher (the experimental condition) and when the researcher looked away (the test condition). Those 19 gulls make the object of this study — so its sample size is quite small.

Staring at the birds did seem to work, they report. Gulls took longer to approach the food when a human was staring at them, and some didn’t even dare attempt to steal the snacks. However, there was significant variation between individual birds’ behaviors. “We found that only 26% of targeted gulls would touch the food, suggesting that food-snatching is likely to be conducted by a minority of individuals,” the paper reads.

The results show that it’s overkill to treat all gulls as being alike, as most are too wary to come near humans. However, it does pay to stare down those few very bold ones, as that might just be the difference between getting your snack stolen or enjoying it yourself.

“We didn’t examine why individual gulls were so different. It might be because of differences in “personality” and some might have had positive experiences of being fed by humans in the past — but it seems that a couple of very bold gulls might ruin the reputation of the rest,” explains senior author Dr. Neeltje Boogert added.

What Dr. Boogert recommends, especially during beach season when gulls are “looking for an easy meal,” is for people to keep an eye on their surroundings for approaching gulls. They often fly down or come from behind people, snatch up food, and run away — but if you can spot them coming and look directly at them, they might just get cold feet.

“Gulls learn really quickly, so if they manage to get food from humans once, they might look for more,” Dr. Boogert explains.

“It seems that just watching the gulls will reduce the chance of them snatching your food.”

The UK’s herring gulls are in decline, the paper further reports, although their numbers are increasing in urban areas. Gulls’ natural diet consists of fish and invertebrates. Both of which are, understandably, hard to get in the city, so the gulls resort to stealing food from humans quite frequently. In the future, the team wants to investigate how eating human foods affects the gulls, and their chicks, in the long term.

The paper “Herring gulls respond to human gaze direction” has been published in the journal Biology Letters.

Developed but unhatched birds can not only pick up signals from their parents — they can also communicate with their (also unhatched) siblings by vibrating their shells.

Inside the eggs, gull embryos hear, and respond to, warning calls from adult gulls.

We humans are spoiled in many ways. We’re completely dependent on our parents for years, it takes us a long time to learn how to walk, and in most parts of the world, we rarely have to provide for ourselves. Other creatures don’t have these luxuries — they need to be prepared for danger as quickly as possible.

When danger lurks, most birds produce a distinctive warning sound. For gulls, it’s a specific “ha-ha-ha” sound. Chicks pick up on this signal and are alerted of the looming danger. But even before chicks are hatched, they can still pick up the danger.

A pair of researchers with Universidad de Vigo in Spain found that unhatched chicks can pick up the danger signal and vibrate their shells, transmitting the message to their less-developed siblings.

“We were very surprised,” said Jose Noguera, the lead author of the study from the Animal Ecology Group at the University of Vigo, Spain. “We were aware that bird embryos were able to produce egg vibrations, [but they vibrated] even more than we expected.”

This is not the first time embryonic communication has been studied. Previous research has shown that embryonic birds, amphibians, reptiles, and even insects receive sensory information that helps them prepare for the harsh realities of the real world. Being aware of these dangers and sharing this information with nestmates can help chicks adapt to real situations more quickly, boosting the family’s chances of survival.

The team also found that there are significant behavioral changes associated with this pre-hatching behavior.

In order to reach this conclusion, the team collected 90 yellow-legged gull eggs from Sálvora Island, a large breeding region off the coast of northern Spain. They sorted them into nests of three. Six days before hatching, two out of the three nest eggs were removed from the nest and then exposed to either a recording of a predator alarm or white noise. The third group was not exposed to any sounds.

The birds exposed to alarm calls vibrated in response. When they were reunited with the egg that was not exposed to any sounds, this egg also mimicked the vibrating sounds. The eggs also underwent genetic chances known to delay hatch time, as a response to looming danger, and had an increase in the production of stress hormones, which makes birds more aware of their surroundings after hatching. Birds that were exposed to alarm sounds were quicker to run and hide after hatching.

Researchers are still unsure how the embryos produce and understand these signals, but it’s an absolutely remarkable communication system, which may be much more widespread than it was previously realized.

The findings are published in the journal Nature Ecology and Evolution.