Despite being more than five times more distant from the Sun than the Earth, Jupiter’s upper atmosphere has temperatures that are similar to our planet, a fact that has puzzled scientists for years. Now, a new study suggests the source of the non-solar energy responsible for these temperatures: Jupiter’s Great Red Spot.

“With solar heating from above ruled out, we designed observations to map the heat distribution over the entire planet in search for any temperature anomalies that might yield clues as to where the energy is coming from,” said James O’Donoghue, a research scientist at Boston University (BU) and lead author of the study.

Planet temperatures are typically determined by taking note of their non-visible, infrared light emissions. For the current study, the team took infrared light emissions from heights approximately 500 miles higher than the visible cloud tops that lie about 30 miles above Jupiter’s rim. The results reveal that when looking at the planet’s southern hemisphere – where the Great Red Spot is located – high altitude temperatures are much higher than expected.

“We could see almost immediately that our maximum temperatures at high altitudes were above the Great Red Spot far below – a weird coincidence or a major clue?” O’Donoghue said.

Jupiter’s Great Red Spot is composed of swirling gases and has varied in size and color over the centuries. The atmospheric flows that exist above this turbulent storm of gases create gravity waves and acoustic waves. When combined, O’Donoghue and his team believe that these two types of waves cause the upper atmosphere heating observed in the results.

“The Great Red Spot is a terrific source of energy to heat the upper atmosphere at Jupiter, but we had no prior evidence of its actual effects upon observed temperatures at high altitudes,” said Luke Moore, a research scientist from BU and co-author of the study.

The findings not only shed light on the effects of Jupiter’s Great Red Spot on its atmosphere, they also suggest that similar processes could be taking place on other planets in and outside of our solar system.

“Energy transfer to the upper atmosphere from below has been simulated for planetary atmospheres, but not yet backed up by observations,” O’Donoghue said. “The extremely high temperatures observed above the storm appear to be the ‘smoking gun’ of this energy transfer, indicating that planet-wide heating is a plausible explanation for the ‘energy crisis.’ “ 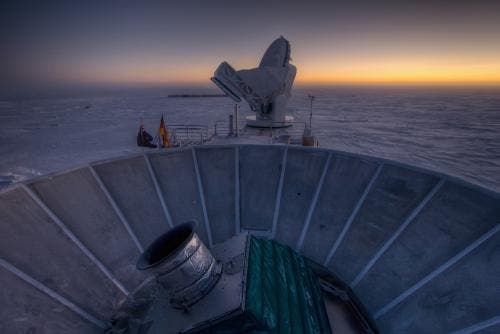 BICEP2 (in the foreground) and the South Pole Telescope (in the background). Credit: Steffen Richter, Harvard University

Nobel prizes, international press coverage, awards – these were all promises and cheers thrown about all over the web after a team of physicists trumpeted during a conference at Harvard that they’ve made one of the biggest discoveries in science: gravity waves. Some theories claim that these waves were generated brief moments following the Big Bang, and a team of researchers based at the  BICEP2 facility in Antarctica claimed during the aforementioned press conference in March that they’ve finally confirmed the models and have discovered evidence that support gravitational waves. A week ago, however, scientists from another team that works with the Planck satellite made its own measurements and came to an entirely difference conclusion. What BICEP2 detected weren’t gravity waves at all, but polarized light produced by specks of dust in the galaxy.

No problem, the BICEP2 was proven wrong. That’s how science works, fortunately – one scientist or group reports a result (revolutionary or not), then another group replicates the results to confirm or not the findings. Science prides itself on contradictions, because that’s how the veil of confusion is ultimately lift to reveal truth. The problem is that the BICEP2 team behaved unscientific by announcing their results before these were verified by anyone outside the group. I’m not out to criticize them personally, I’m just trying to signal that this very event is an example of what can go wrong (hint: everything) went scientists steer away from a basic pillar that’s been proven time and time again to work: peer review. It’s not like this is the first time something like this happens. Only a couple of years ago a team at CERN made a most audacious claim that neutrinos could travel faster than light. The claim was later refuted and the initial results were attributed to some bad wiring in the detection tech. Some scientists from the project resigned, lives may have been ruined. Once again, we return to the basics : extraordinary claims require extraordinary evidence.

Video showing one of BICEP2’s researchers at Andrei Linde’s doorstep to celebrate. Linde is one of the theorists whose work they claimed to have proved.

Both the Planck satellite and the South Polar BICEP2 telescope are designed to study what’s called the cosmic microwave background (CMB). First discovered in 1964 in a groundbreaking paper, CMB can be liken to fossil light waves that are rippling through space to this day after being emitted some 300,000 years following the Big Bang. Since their discovery 50 years ago, the CMB has been the go to source for studying cosmological phenomena. Like CMB, gravity waves are also relics from a time long past, only these are theorized to have been emitted only fractions of a second after the Big Bang. By probing gravity waves, physics would be able to tell a great deal about what was going on in those critical moments that spurred the cosmic inflation. Most notably, it would help scientists differentiate between the so many cosmic inflation theories proposed until today.

After carefully analyzing their own observations for the cosmic microwave background, the Planck team concluded that the supposed signal for gravity waves was, more likely, just emission from dust. To analyze cosmic background radiation, scientists need to first subtract the glow of our own galaxy in the same wavelengths as the CMB microwaves. Apparently, the BICEP2 experiment missed to include maps of the dust polarisation from the Milky Way in their calculations (they didn’t have them at their disposal, granted). In the end, the researchers underestimated the foreground emission from dust, and therefore over-estimated the significance of any claimed gravitational wave detection.

Some people said this event gives science a bad rep. We’re all flooded with misinterpreted, out of context news that herald all sorts of scientific developments that turn out to be otherwise in reality. This time, it wasn’t the press that blew it; it was the scientists.