Some of the earthquakes that take place on the San Andreas Fault – which extends approximately 800 miles through California – are the result of the gravitational pull between the sun and the moon, according to a new study.

A 3-D perspective view of the San Andreas Fault that extends through California. Credit: Wikipedia

For years, scientists have been fascinated by the gravitational tug of war between the sun and moon and the effects that it has on the Earth. Just like sea levels, the surface of the Earth goes up and down with the tides due to this gravitational pull. In the current study, the team found that during certain phases of this cycle, low-frequency earthquakes are more likely to occur

“It’s kind of crazy, right?” said Nicholas van der Elst, a U.S. Geological Survey (USGS) geophysicist and first author of the study. “That the moon, when it’s pulling in the same direction that the fault is slipping, causes the fault to slip more – and faster. What it shows is that the fault is super weak – much weaker than we would expect – given that there’s 20 miles of rock sitting on top of it.”

Van der Elst and his team examined around 81,000 low-frequency earthquakes that took place between 2008 and 2015 along the Parkfield region of the San Andreas Fault and looked for a connection to the “fortnightly tide,” which is the fault’s two-week tidal cycle. The data revealed that these particular earthquakes occurred more often during the waxing period – the time when the tide is increasing in size at the fastest rate.

Tides within the surface of the Earth are strongest when the sun and moon and aligned and these forces cause stretching and compression of its crust. Some faults are more susceptible to tidal forces than others, and numerous additional factors such as the orientation of the fault and its distance to the Earth’s crust affect this susceptibility.

Examination of low-frequency earthquakes and their connection to tidal forces can help geologists better understand the San Andreas Fault and predict the possible outcomes of larger earthquakes. Furthermore, they also provide information on regions of the fault that extend as far as 20 miles underground and would otherwise be impossible for researchers to reach.

“It’s almost like having a lot of little creep meters embedded in the fault,” said David Shelly, a USGS seismologist and co-author of the study. “We can use these low-frequency earthquakes as measurements of, at least in a relative sense, how much slip is happening at each little spot on the deep part of the fault where we see these events. When we don’t see them, we don’t know what’s happening; we don’t know whether it’s slipping silently or not slipping at all.”

The geysers on the surface of Saturn’s moon Enceladus have been counted and mapped, strengthening theories that Enceladus is one of the best extraterrestrial places in our solar system to look for life.

Earth is not the only place in our solar system which holds water. For example, Enceladus also has liquid oceans – albeit ones covered by a thick layer of ice. Researchers believe that the oceans are kept liquid by heat generated by the gravitational stress which Saturn holds on its satellite. The tectonics of Enceladus is also surprisingly active, and one of the results are the 101 geysers on its surface.

Scientists are fairly sure that the gravitational pull keeps the ice melted and created these hot spots – but the exact mechanism through which the geysers form is still not clear; one theory is that huge chunks of ice act somewhat similar to tectonic plates, and the friction between their edges generates heat close to the surface. Another theory is that water boiling deeper flows to the surface, creating the surfaces we see today.

If you look at the map of the geysers on Enceladus, again, you see a similarity to Earth tectonics – the geysers are concentrate on distinct lines, like volcanoes are concentrated at the edge of tectonic plates here on Earth. In this case, the lines coincide with the areas of most stress. 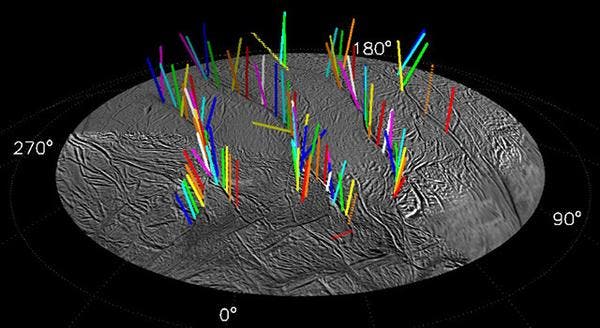 “[This] strongly suggests that the heat accompanying the geysers is not produced by shearing in the upper brittle layer but rather is transported, in the form of latent heat, from a sub-ice-shell sea of liquid water, with vapor condensing on the near-surface walls of the fractures.”

Still, regardless of the formation mechanism, Enceladus seems like a very interesting place to look for alien life – something which you wouldn’t initially expect, for the satellite of a frozen gas giant like Saturn.

For almost 100 years it carried the blame of sinking the world’s most famous ship, but now, the ill-famed iceberg may be cleared, after some researchers claim they’ve found the true culprit – the Moon.

Now don’t get the wrong idea, it was the collision with the ice mass that ultimately brought the demise of the Titanic, but it was a freak lunar event three months earlier that put the obstacle in the ship’s path, scientists claim. An incredibly rare combination of astronomical events led to this collision, including the closest lunar approach in 1400 which led to an incredibly large tide in January 1912.

This once-in-a-turtle-lifetime event swept a vast field of icebergs from their normal positions and brought one to the lane where it was when it sank the Titanic on April 14th, claiming 1500 lives and destroying the ship which was thought to be ‘unsinkable’.

Prof Donald Olson of Texas State University who led the study and published it in the Sky and Telescope magazine explains:

“They went full speed into a region with icebergs, that’s really what sank the ship, but the lunar connection may explain how an unusually large number of icebergs got into the path of the Titanic.”

Unusually large tides such as the one in case are known as spring tides, and they occur when the Moon and the Sun are aligned in a way that sums up their gravitational pull. Professor Olson adds:

“We don’t claim to know exactly where the Titanic iceberg was in January 1912 – nobody can know that – but this is a plausible scenario intended to be scientifically reasonable.”

You could also put it this way: it wasn’t the iceberg that sank the Titanic, it even wasn’t the spring tides – it was human arrogance – which claimed nobody and nothing can sink the ship. As usual when we challenge it, nature put us in our place.